The economic slowdowns in Europe and China, coupled with the possible exit of Greece from the Eurozone, have caused a broad-based panic in the markets. In response to the new political and economic volatility, oil prices have plummeted nearly 14% from the beginning of May (see chart below). In tandem, market prices of most oil producers have dived this month. 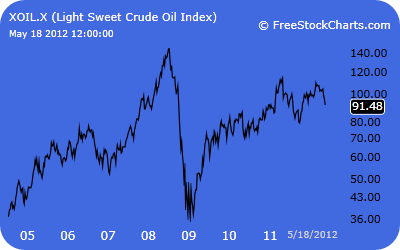 Some are concerned that extended market gyrations will have a continued adverse effect on oil prices and an imminent impact on financial and market performance of oil companies. However, a likely scenario is that, once the momentary market fears wither, resumed economic growth will drive a rebound in oil prices. U.S. Energy Information Administration (EIA) forecasts that prices will hover around the $100 a barrel mark for the foreseeable future (see chart below). Thus, the current correction in market prices of some oil companies creates an opportunity to establish long-term positions in the sector's attractive dividend plays that have bright outlooks for sales, earnings, and dividends/distributions. 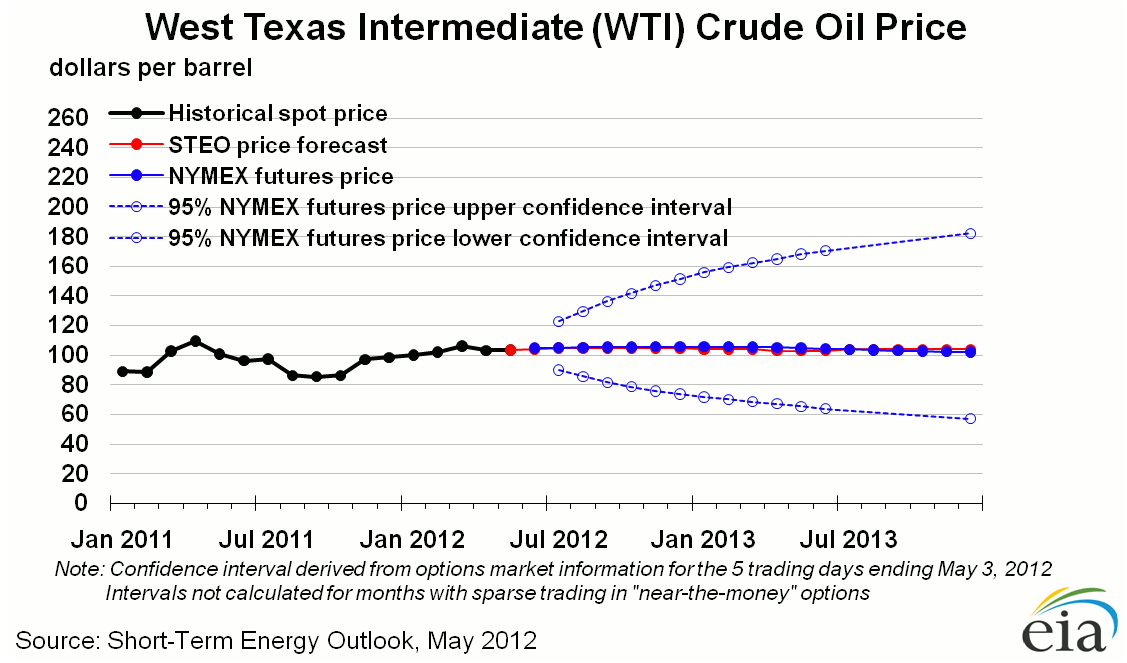 The supply and demand of oil are inelastic, so that short-term fluctuations in prices do not have immediate effects on production and consumption. In this regard, despite the recent decline in oil prices, production has been charging higher. According to a Baker Hughes (NYSE: BHI) survey reported in Wall Street Journal last week, the number of rigs pumping oil in the United States has jumped to an all-time record of 1,372. Many oil companies have ramped-up production and efforts to increase the number of new oil field developments to boost output. One such company is Linn Energy (Nasdaq: LINE), which has invested $2.3 billion in acquisitions since November 2011.
Its latest joint venture with Anadarko Petroleum (NYSE: APC), representing a 23% stake in the Salt Creek project, will significantly increase Linn Energy's production by 2015. In a testament to its robust growth, the company has already seen its revenues grow by more than two thirds in the first quarter 2012 from the same quarter a year earlier. And even without any new capacity, Linn Energy can double its output within 3 years.
Very relevant is the fact that oil companies today hedge their production exposures to volatile oil prices. In the case of Linn Energy, the company's expected oil production is fully (100%) hedged through 2015 and about 82% hedged for 2016. For the current year, the company's output is hedged at a weighted average oil price of $98.08 per bbl, above the current market price for oil. In comparison, the company's peers hedge around 44% of their estimated production this year and much lower thereafter.
Due to acquisition and new joint ventures, Linn Energy has been issuing new equity and debt, and has been burning cash. Despite being deep in the red in free cash flow, this oil and natural gas company has been able to boost cash distributions significantly. Its cash distributions have grown at a net rate of 8.4% a year over the past five years, according to Bloomberg. In late April 2012, the company hiked its cash distribution by 5% to an annualized rate of $2.90 a share. Therefore, the company is currently yielding a remarkable 8.10%, with a payout ratio of 56% (on a trailing-twelve-month earnings basis) and a 1.14x distributions coverage ratio1 (on par with that reported in the first quarter of 2011).

In addition to Linn Energy, there are other oil and natural gas producers sporting high yields and good growth prospects.
Baytex Energy Corporation (NYSE: BTE) and Legacy Reserves LP (Nasdaq: LGCY) are two other independent oil and natural gas plays that boast high dividend (distribution) yields of 6.0% and 8.88%, respectively. According to company reports, Baytex Energy hedges up to 50% of its net exposures to commodity prices and exchange rate notes, while Legacy Reserves hedges about 71% of its exposures. 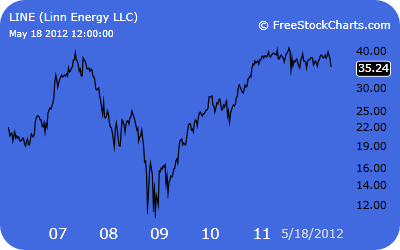 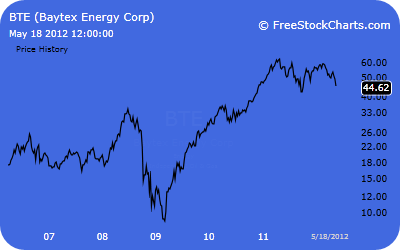 According to Finviz.com, analysts expect that both companies will see robust growth in earnings per share (EPS) over the next five years.
Baytex Energy will grow its EPS by nearly 13.0% annually over the next five years, while Legacy Reserves LP will boost its EPS by about 8.3% per year. In comparison, analysts expect Linn Energy to grow its EPS by 8.5% annually over the next five years, which is almost five times as fast as the company's annual average growth over the past five years.
The current correction in stock prices has created opportunities to invest in these companies. They all have favorable outlooks, including the fair prospects for continued growth in cash distributions. Their high yields should be a boon for income investors.