Historically, small cap stocks realize high returns but are also extremely volatile. For long-term investors who are not interested in double-digit growth every quarter, preferring a relative stability in earning potential, there are small-cap stocks in the financial sector that can meet their needs.
Below is a summary of four small-cap stocks in the Financial Services sector. Based on their consistency in dividend paying, low volatility (average beta 0.85) and a low payout ratio (average 48.8%), all four stocks could be included in a growth portfolio. 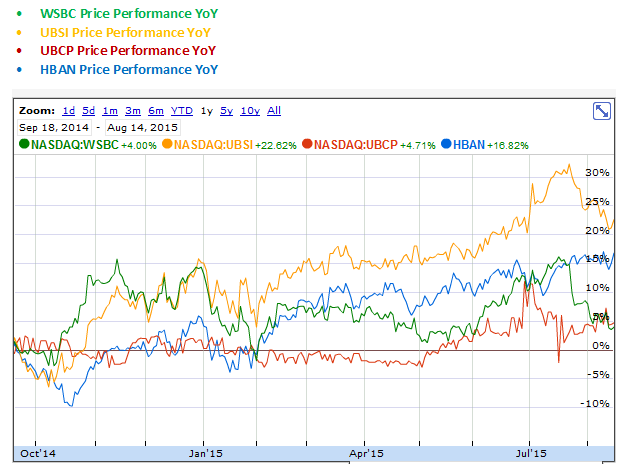 Huntington Bancshares (Nasdaq: HBAN) has the highest percentage change in 52 week low, the lowest payout ratio and a P/E ratio that is higher than the industry average. With a beta of 1.24, the stock is relatively volatile. Analysts estimate an average 5 year EPS of $1.15 and an earnings growth of 10.17% as a result of HBAN’s strategic decision to expand its product line and optimize distribution. The holding company of The Huntington National Bank that provides commercial, insurance, consumer, small business and real estate banking services aims to leverage its operating results in 2015 to leave room for improving its efficiency and profitability, thus offering its stockholders a stronger dividend going forward.

United Bancorp (Nasdaq: UBCP) is the holding company of The Citizens Savings Bank that provides retail and business banking services. UBCP’s EPS YoY growth of 25% ($0.30 from $0.24 in 2014) and lower payout ratio by -13.00% (66.67% in 2014) highlights the company’s focus on expanding its customer base to lower its debt and achieve net income growth. UBCP’s strategy to attract new customers into lower-cost funding while allowing higher-cost funding to overflow has led to an increase of $14.1 million in low-cost funding and a decrease of nearly $10 million in high-cost funding, thus lowering interest expenses. With a beta of 0.06, the stock is absolutely safe.


United Bankshares (Nasdaq: UBSI) operates two banking subsidiaries, United Bank (WV) in West Virginia and United Bank (VA) in Virginia, which both provide commercial and retail banking services and products. The company has the highest payout ratio of all four competitors, suggesting that it needs to leverage its debt ($1.37b). On the upside, it has a P/E that is way above the industry average, justified by the 5% growth in Q2 2015 earnings ($34.8 million from $33.2 in 2014). Analysts estimate that UBSI will increase its dividend in Q4 2015, given its common practice to do so every second fiscal year, but also given the growth in deposits and earnings. With a beta of 1.04, the stock is safe.

WesBanco (Nasdaq: WSBC) is a West Virginia-based company specialized in retail, insurance, corporate and mortgage banking. WSBC’s low payout ratio and its P/E close to the industry average indicate that the company manages its debt and has achieved earnings growth. Net income Q2 2015 reached $22.4 million, an 18.5% growth from $18.9 million in 2014. Additionally, non-performing loans decreased to 1.24% of total portfolio loans (from 1.26% in 2014), while criticized and classified loans went down to 1.68% of total portfolio loans (from 3.08% in 2014). These are the positive credit results of the merger with ESB Financial Corporation in February. Analysts estimate that WSBC’s efficiency ratios will continue to improve as the company demonstrates efficiency in successful investments, thus leaving room for EPS growth ($2.25 in 2015) and stronger dividend. With a beta of 1.06, the stock has low volatility.