Last week, China unexpectedly devalued the Yuan in an effort to make the Chinese economy more competitive and boost its exports. The move of the Chinese Central Bank, although described as temporary, has shocked the global markets pushing stocks and commodity prices sharply lower and created a fear for global currency war that would destabilize more economies around the world.
On the upside, small and mid-cap stocks that consistently pay a steady stream of income on a regular basis have become more attractive in such a distressed global financial environment with high exposure to risk. Especially, lower oil prices have increased the demand for imported oil from China, thus raising the spot rates for oil tankers.

This article summarizes three small and mid-cap stocks that trade in the services sector of the shipping industry, compared to the S&P 500 Index. All three companies are tanker companies, which are expected to improve their financial results in 2015 and 2016 due to the steady flow of new vessels entering the market and the strong demand for oil from China. 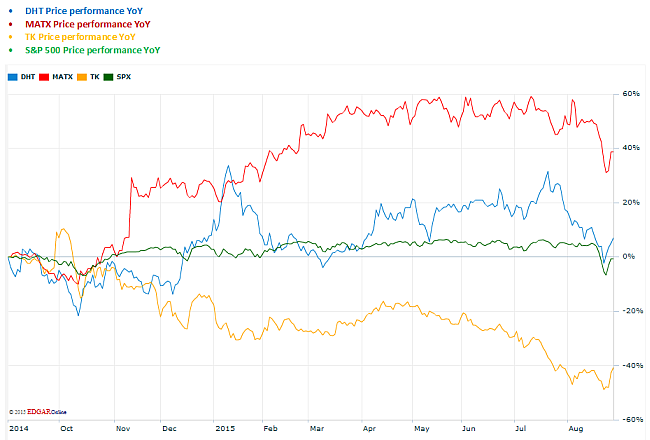 DHT Holdings (NYSE: DHT) is an independent Bermuda-based crude oil tanker company with a fleet of 18 tankers that trade internationally, while the company operates management companies in Oslo, Norway and Singapore. The acquisition of Samco Shipholding in September 2014 has led to addition of seven VLCC carriers (Very Large Crude Carriers) to be delivered in 2015 and 2016 and of another five VLCCs to be delivered in 2016, all of an average age of 4.5 years. DHT is expected to capitalize on lower oil prices and higher spot rates, translating new vessels into strong financial results in Q4 2015.
In July, the company announced a new policy regarding dividend and capital allocation. As a result of the current tanker market, DHT intends to return at least 60% of ordinary net income (adjusted for extraordinary items) to shareholders. Further, DHT intends to use a significant amount of surplus cash flow after returning such capital to shareholders to delever its balance sheet.
DHT’s D/E ratio suggests that the company is effectively managing its debt. Given DHT’s beta and that it has outperformed the S&P 500, the stock is a safe investment with a growth potential, also reflected in its low payout ratio.

Matson (NYSE: MATX), founded in 1882, is a Hawaii-based marine transportation company offering superior services in the Pacific region. Matson operates a premium, expedited service from China to Southern California. The company acquired Horizon Lines, Inc. for $469 million, a strategic acquisition that is expected to expand MATX’s business in the Alaska market, thus delivering higher shareholder value and dividend in 2015. The EPS of $1.92 is expected to average at $2.40 over the next 3 years, whereas the 5-years long-term annual growth is expected to be 5%. MATX’s D/E ratio, below 2, suggests that the company is effectively managing its debt, also reflected in low payout ratio. A beta of 0.90 suggests a safe investment.


Teekay Corporation (NYSE: TK) is a crude oil and gas marine transportation company that operates both in Bermuda and internationally. Teekay consists of 3 publicly-listed subsidiaries: Teekay Offshore Partners (NYSE: TOO), Teekay LNG Partners (NYSE: TGP) and Teekay Tankers (NYSE: TNK). Teekay Tankers’ free cash flow increased during the quarter ended June 30, 2015, compared to the quarter ended March 31, 2015, primarily due to stronger average spot tanker rates earned on its Aframax tankers, LR2 product tankers and MR product tankers, a full quarter contribution from the five modern tankers acquired in the first quarter of 2015, and the addition of two chartered-in vessels which delivered in the first quarter of 2015, partially offset by slightly lower average spot tankers rates on Teekay Tankers’ Suezmax tanker fleet.
Teekay’s high D/E ratio, well above 2, indicates that the company has been aggressively funding its growth with debt financing. This is further sustained by its huge payout ratio. On the upside, the agreement to acquire 12 Suezmax tankers from Principal Maritime Tankers for $662 million is expected to have a positive impact on TK’s earnings, free cash flow and EPS. Analyst consensus estimates an average annual growth of 12% over the next five years and an average EPS of $1.59 up to 2017 (current EPS is $0.61). Given that TK’s financial leverage is on a downward trend and that the Suezmax tankers acquisition is accretive to FCF and EPS, there is room for a higher dividend (currently at $1.50) and long-term value for the investors.

13.7% Yield With Over 9 Years Of Coverage: Dynagas LNG Partners Preferred

Dynagas (NYSE: DLNG) released earnings on June 5 and had its conference call on June 6. Performance was decent, yet a bit worse than expected, with distribution coverage at 1.3x (20%+ DCF yield), and $112 million in free cash available at end of quarter (before paying common and preferred dividends). Source: Dynagas LNG Partners Presentation The big news was despite DCF and cash coverage ratios well above 1, Dynagas LNG Partners will probably be eliminating the common... Read more

Co-produced with Long Player and PendragonY for High Dividend Opportunities. Following the market correction that we saw at the end of 2018 and the tax loss-selling, the vast majority of preferred stocks pulled back. While most fully recovered since, there are some pockets of opportunities that remain overlooked by investors. We have been publishing a series of articles on undervalued high-yield preferred stocks. In our most recent reports, we highlighted the preferred stocks of Landmark... Read more

At the end of every month I publish a Cash Flow Kingdom 'CFK' Synopsis article which reviews the month, current Best Opportunities (includes both growth and income), updates the CFK Income Portfolio and takes care of some housekeeping chores (upcoming calendar, YTD realized gains and losses disclosure, etc.). Normally this Synopsis article is not released to the public. However, with CFK members' acquiescence, a suitable delay, and a few edits, I thought I'd do this one time. If it's well... Read more

Teekay LNG Partners (TGP) is one of the largest LNG shipping operators in the world, partially owned and managed by Teekay Corporation (TK). Its fleet consists of 42 carriers with an average age of 6.5 years, compared to an average of 8 years in the industry. This fleet will be complemented by 7 additional carriers that will be delivered in 2019 and a Regas Terminal. Some of these carriers are partially owned. Even though it may seem a very cyclical business, nearly 90% of the... Read more

As many readers know, I have been investing in shipping preferred stock for a while. I currently own positions in (capital structure positions listed - common, preferred or both) Costamare (CMRE) (CMRE.PC), Golar LNG (GMLPP), Seaspan Corp. (SSW.PH), Tsakos Energy (TNP.PD) and Teekay Offshore (TOO) (TOO.PE). Additionally, I own Teekay (TK) common. Many readers (and friends/associates) ask why I am invested in the volatile (and typically out of favor) shipping industry. The answer is simple:... Read more