Large caps do not always trade at a fair value. Often, they are overvalued with their price driven by high investor confidence. Sometimes, they are considerably undervalued, allowing a lot of room for further growth. One of the metrics to measure if a stock is under- or overvalued is the Graham number. According to Benjamin Graham, considered the father of value investing, the Graham Number is the maximum price that a value investor should pay for a given stock, based on its earnings per share (EPS) and book value per share (BVPS). A stock whose share price is below the Graham Number is considered to be undervalued. The formula for the Graham Number = SQRT (22.5 x EPS x BVPS).
The article discusses 3 undervalued large-cap stocks trading in the utilities industry, which pay high dividends at a steady rate. 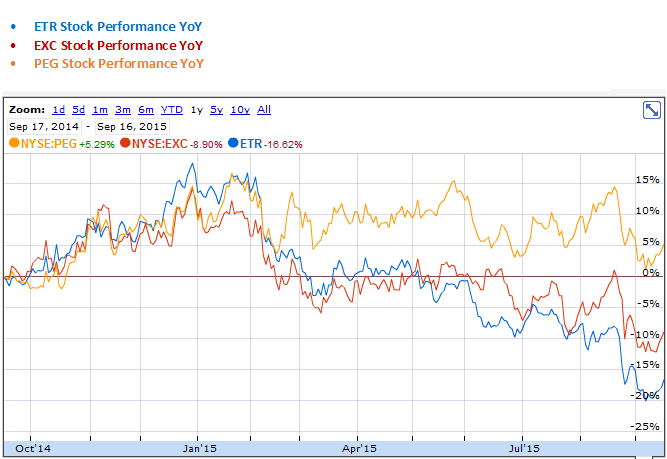 Entergy Corporation (NYSE: ETR) is a holding company operating in the electric power production and retail electric distribution in the U.S. Through its Utility and Entergy Wholesale Commodities segments, the New Orleans-based company engages in the transmission, distribution and sale of electric power and natural gas in certain areas of Arkansas, Mississippi, Texas, and Louisiana as well as in the ownership and neutralizing of nuclear power plants in the northern U.S. The company’s forthcoming $62 million transmission investment in the Monticello to Reed project that will start in Q4 2015 through Entergy Arkansas and $57 million transmission investment in Southeast Louisiana through Entergy Louisiana, are expected, along with other projects, to support economic growth in the areas and improve the company’s reliability. Based on its EPS and BVPS, ETR currently trades at a discount to fair value rate of 84.3%, suggesting that the stock is fairly undervalued. Analyst consensus estimates an average annual rate of -0.55% for the next five years, with an average EPS of $5.26, up by 18.9% compared to the current EPS of $4.42. Perhaps a metric to follow is the D/E ratio, which is slightly above 1, however, given the company’s strategy that focuses on investing its capital to replace aging infrastructure, it is likely to see ETR outperforming the market in the coming quarters, in spite of its YoY declining performance, down by 16.62%. A beta of 0.55 implies a safe investment. Payout ratio suggests steady dividend payments.

Exelon Corporation (NYSE: EXC) is a Chicago-headquartered utility holding company engaging in the generation and distribution of energy, mainly in Illinois, Pennsylvania, Maryland, Philadelphia and Baltimore, to retail and wholesale customers. Both in Q1 and Q2 2015, EXC’s pricing strategy was affected by the mild weather, lower gas prices, and lack of liquidity in the financial markets, which had an impact on the forward markets, including utilities. On the upside, the company’s hedging strategies to mitigate the risk from projected retirements and new generation resources, are expected to pay off up to 2018 in the retail and wholesale market. Currently, EXC trades at a discount to fair value rate of 74.8%, which makes the stock considerably undervalued. This is further sustained by the low D/E ratio, well below 2, and payout ratio, which both suggest improved shareholder value in the form of dividends. Analysts forecast an average annual growth of 4.4% over the next five years, and an average EPS of $2.67, growing at a steady rate. Beta 0.32 suggests a perfectly safe investment, in spite of the YoY decline in stock performance by 8.90%.


Public Service Enterprise Group (NYSE: PEG) is a Newark-based holding company engaging in the generation and sale of nuclear, coal, gas, oil-fired and renewable energy, primarily in the Northeastern and Mid Atlantic U.S. for industrial, commercial and residential use. PEG’s investment program is expected to generate high returns by 2019 because the “business as usual” earnings contribution to the company’s consolidated earnings normally exceed 50%, thus boosting PEG’s operational efficiency and reliability. Currently, PEG trades at a discount to fair value rate of 87.3%, suggesting that the stock is slightly undervalued. Analyst consensus estimates an average annual rate of 3.77% up to 2020 and an average EPS of $2.96, down by 18.8%, compared to current EPS of $3.64. On the other hand, the company’s low D/E ratio and payout ratio are a firm indication that PEG has the financial strength to continue delivering dividend payments to its shareholders, while sustaining a stock performance that outperforms the market. Furthermore, given the company’s Graham number, PEG is selling for a good price, allowing room for further growth.