For many investors, a bear market is quite intimidating. Their invested money is losing value and they’re losing interest in stock ownership. Conversely, a higher expectation in the growth and the future cash flows of a company is likely to raise investor confidence, especially if the company delivers dividends at a steady rate. Dividends imply a company’s growth potential and consequently how risky it is to invest in it. When a company can grow, the risk of losing investor capital is lower and the potential of delivering a dividend is higher. In volatile markets, dividend yield is widely viewed as an important metric, but, in reality, it is a misleading way to determine a stock’s investment value if the stock’s risk is not considered as well.
This article is dealing with three low-risk stocks from different sectors with an average dividend yield of 3.17%. Compared to the NYSE Composite Index (NYA) over the past five years, all three stocks have a return close or above 30%, an average beta of 0.70 and an average D/E ratio of 1.76. These metrics confirm that when a company keeps on growing, so does it’s shareholder value. 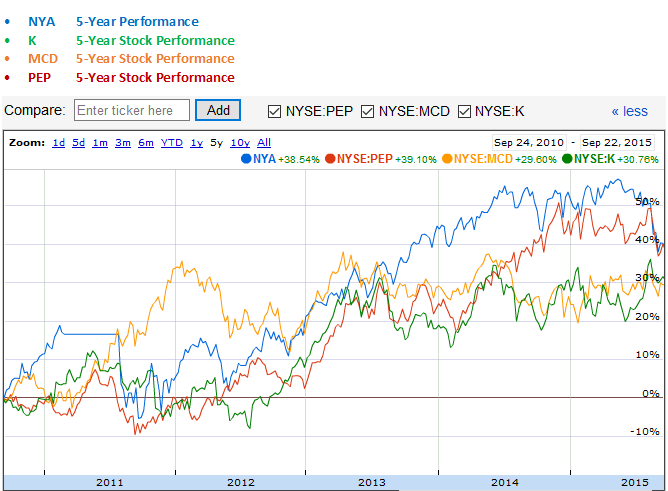 Kellogg (NYSE: K), the Michigan based company, trades in the processed & packaged food industry. In 2014, Kellogg has experienced slowing demand in the cereal sales in the U.S due to a shifting demand towards protein-rich breakfasts, but it has managed to generate a steady EPS of $1.06 in Q2 2015, up by 10.4% from EPS $0.96 of Q2 2014. For the next three years, analysts forecast an average EPS of $3.76, which not only will bring payout ratio down to 53%, but it also suggest that Kellogg is a growth-oriented company with an operating stability. This is further sustained by the fact that K’s beta is 0.64, below 1, making it a low-risk, safe investment. Additionally, Kellogg is currently trading for a P/E of 63.60, well above the industry average of 26.79, suggesting that investors are expecting good things from the company in the coming quarters. Analyst consensus estimates earnings growth at an average annual rate of 6.51%. Given that Kellogg’s management is now focused on the health aspects of its products by highlighting which products are gluten-free and how they provide health benefits, both the EPS growth and the earnings growth rate over the next years are achievable.

McDonald’s (NYSE: MCD), the globally-known franchise that trades in the restaurant industry, is a company that capitalizes on its strategic moves. In the beginning of 2015, CEO Don Thompson was replaced by Steve Easterbrook, a move that has shifted the company’s interest to health-conscious consumers by using hormone-free milk and chicken raised without antibiotics. Currently, McDonald’s delivers an annualized dividend of $3.40, which leads to a low payout ratio. Furthermore, the company’s EPS of $4.32 is expected to reach $5.15 over the next three years. This is in line with McDonald’s Q2 2015 franchise margins, a 2% increase driven primarily by business expansion in Europe, which has offset the margin decline for the Q2 2015 in the U.S, China and Russia. Declining margins in these markets were mainly the result of increased commodity costs, about 1%. Analysts that follow MCD expect an average annual growth rate of 7.53% in the company’s earnings for the next five years.


PepsiCo (NYSE: PEP) is a New-York based company that trades in the food, snack & beverages industry, globally known for its Lays, Ruffles, Doritos, Cheetos and Quaker brands, among others. Perhaps the most important thing to say about PepsiCo is that it has a dividend increase of 339% since 2000 (from $0.64 to $2.81). This indicates a perfectly safe investment, further sustained by PEP’s beta of 0.75 and low payout ratio. Also, as the company grow its dividend payments, it also grows its EPS. The current EPS of $4.33 is expected to grow to $5.19 up to 2018. In spite of the macroeconomic headwinds in the global market and the volatile markets, in Q2 2015 PepsiCo achieved 5.1% organic revenue growth (increased output and enhanced sales), by focusing on brand building and customer loyalty. Additionally, PepsiCo is taking the proper steps in its pricing strategy to capitalize on its global sourcing and contribute growth to its top-line, forecasting a $5 billion productivity savings through 2019. Analyst consensus forecast a 6.7% average annual earnings growth for the next five years.

A weekly summary of dividend activity for Dividend Champions and Contenders. Companies which declared increased dividends. Companies with upcoming ex-dividend dates. Companies withupcoming pay dates. Introduction The Dividend Champions list is a monthly compilation of companies which have consistently increased their annual dividend payouts, and the latest edition may be found here. However, since this list is only produced once per month, the data in it can quickly... Read more