When investors consider financial ratios individually, they may put their money in stocks that do not really fit in their profile. For instance, a high EPS alone doesn’t say too much about a company, if one doesn’t look into the company’s revenues, net income, sustained dividend payments and so on. Conversely, a high EPS combined with a good dividend yield above 3% and consistency in good, strong financial results, may suggest a great investment.
The article analyzes 3 mid-cap stocks in the consumer goods sector, but in different industries. All three have outperformed the market on YoY comparison, whereas their average EPS is $1.05 and their average dividend yield is 3.80%. Additionally, their average beta of 0.53 offers the potential of a higher rate of return combined with the average payout ratio of 68%. 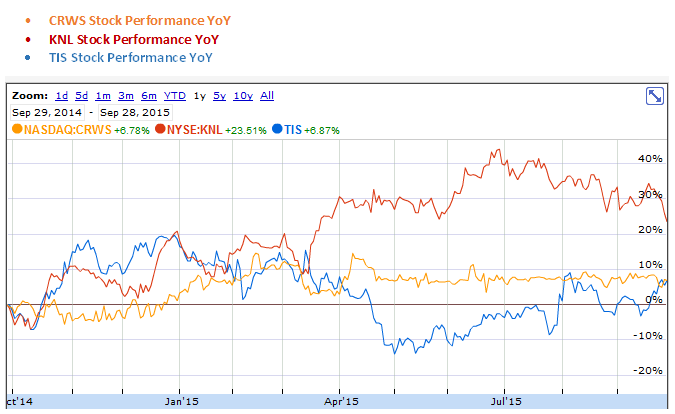 Crown Crafts (Nasdaq: CRWS) is a Louisiana-based company that distributes infant, toddler and juvenile consumer products in the U.S and internationally. The reported YoY income in Q2 2015 was down by 27.3% ($830,000 from 1,142 million) due to after-tax charges related to a past lawsuit. On the upside, CRWS’s dividend yield of 3.99% combined with an EPS of $0.59 makes the stock a good long-term investment, considering that its payout ratio is low and in line with the clothing industry average payout ratio of 47.7%. Consensus estimates an average EPS of $0.68 through 2017, which is expected to offer long-term shareholder value and a steady return potential. The company’s beta of 0.55 makes the stock less volatile, making CRWS a risk-reducing asset in a diversified portfolio.


Orchids Paper Products (NYSE: TIS), an Oklahoma-based company engaging in the manufacture and sale of tissue products across the U.S, has reported strong QoQ net income growth of 231.75% in Q2 2015 ($3.9 million from $1.2 million). Also, TIS’s 22.64% YoY revenue growth ($142.7 million from $116.4 million) has generated an EPS of $1.25. Currently, the stock trades at $26.36, almost in line with its 52-week high, which combined with a dividend yield of 5.31% and a shareholder equity growth of 18.46% ($84.8 million from $100.58 million) suggests a company focused on growth. The company’s plan to invest up $127 million for the establishment of a first-class paper making and converting facility in Barnwell, SC will likely raise investor confidence and boost stock’s performance. Shipping product operations will begin in Q1 2016 and paper making production in Q1 2017.

Q1 2016 just ended. What a roller coaster the market has been so far this year. This month I set a new monthly dividend payout record. I knew March would be a great month but not this great. This month my dividend income totaled $784.66. I collected dividends from 24 companies. That's 24 mini paychecks that I'm collecting money from on either a monthly or quarterly basis without doing any work. Passive income is the best income. March was a really strong month for U.S. markets. My... Read more

A High-Dividend Stock With 40%-Plus Sales/EPS Growth, Insider Buying And Going Ex-Dividend This Week

Looking for a successful turnaround story? This week's focus stock is not so much a turnaround stock, but rather a company which invested heavily over the past few quarters in order to ramp up its capacity and efficiency. Their earnings suffered for two quarters, but they're back on track, with big sales and earnings gains, as their new equipment has come online.Profile: Orchids Paper Products Company (NYSEMKT:TIS) manufactures and sells tissue products for at-home and away from home markets in... Read more