The Australian Securities Exchange (ASX) is one of the leading financial market exchanges around the world, providing a full range of services, including listings, trading, clearing and settlement, across a comprehensive array of asset classes. With a total market cap of approximately $1.5 trillion, the ASX is home to some of the world’s leading resource, finance and technology companies, while the $47 trillion interest rate derivatives market is prime in Asia and among the largest in the world.
Australian investors favor high-yielding dividend paying stocks, primarily because many stocks in the ASX generate far higher returns than expected or higher than what government bonds would deliver. Furthermore, when a stock is consistently delivering a dividend payment, it becomes increasingly reliable and investors view it as having the potential to deliver substantial capital gains, so they keep on investing in the stock and the stock keeps on gaining value in the long-term.

In the ASX, most large-caps are paying their dividends twice a year, while small-or mid-caps may select to reinvest their profits and skip the dividend over future growth prospects. Of course, there are great small and mid-cap, low risk ASX companies with a low D/E ratio that outperform the market and deliver dividends to their shareholders. This article focuses on three such companies, averaging a payout ratio of 43.8% and a dividend yield of 3.66%. All three companies reported their Fiscal 2015 results between June and August 2015. 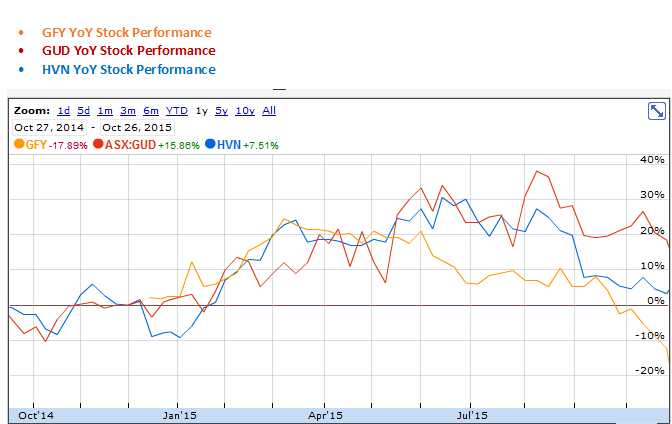 Godfreys Group (ASX: GFY) is the largest retailer of floor care and associated cleaning products in Australia and New Zealand. The company is widely regarded as a specialist in a number of company-owned and third-party brands, as well as a Hoover brand representative and it offers vacuum cleaners and cleaning products, accommodating consumers at all price levels. The company’s current distribution network consists of 212 branded retail stores both company-owned and franchised in Australia and New Zealand, while the company is also distributing its products through wholesale channels as well as online.
Fiscal 2015 Results: GFY’s sales reached $182.6 million, an increase of 5.2% YoY from $173.5 in 2014. The company achieved an EBITDA margin of 12.3%, with EBITDA reaching $22.5 million from $19.9 million in 2014, up by 13.01%. Godfreys is set to continue its investment in the China office with the aim to boost local presence and cooperation with key suppliers. Furthermore, it has launched joint ventures with overseas suppliers of important new products, while it plans to continue discovering new sources of supply overseas.
Future Outlook: To maintain the strong results of FY 2015, Godfreys expects growth from the launch of new products, the 8 new franchise stores, and the launch of the air purification range. Furthermore, the company’s low D/E ratio suggests a good financial management, whereas its payout ratio of 38%, almost in line with the 31% of the retail industry payout ratio, indicates sustainable dividend payments.

GUD Holdings (ASX: GUD) engages in the manufacturing, import, distribution and sale of cleaning products, household appliances, warehouse racking and water pressure systems in Australia, China and Hong Kong, among other markets. By owning a dynamic brand portfolio in the Asia-Pacific region, GUD features leading brands in individual product lines and industries. Additionally, the company focuses on product design and development, offshore sourcing and supply chain management.
Fiscal 2015 Results: GUD reported strong operating results, an increase of 90.5% YoY, reaching $57.3 million from $30.1 million in 2014, whereas profits reached $35.3 million from $17.7, an increase of almost 100%. Furthermore, the company’s sales reached $611.5 million, a 3% YoY increase. Also, the company’s decision to move the manufacturing of Dexion storage solutions to Malaysia delivered a 72% increase in EBIT that reached $5.4 million.
Dividend Policy: GUD delivered a final dividend of 0.22 per share, which totals up to a 2015 dividend of 0.42 per share, an increase of 17% YoY.
Future Outlook: GUD’s main objectives are to deliver long-term shareholder returns and to maximize the value of its brand portfolio. Most of the company’s products have low brand equity and therefore the barriers for entry of low-cost competitors are low. GUD focuses on improving its financial performance by capitalizing on new product launches in 2016, as well as improved productivity gains from the acquisition of Brown & Watson International business, a supplier of automotive products. In doing so, the company will able to create and sustain a competitive advantage, while maintaining economies of scale in its sourcing.


Harvey Norman Holdings (ASX: HVN) is a public company that awards franchises to independent business retails of electrical, computers, furniture, bedding, home improvement, carpet and flooring products in Australia, New Zealand, Malaysia, Singapore, Slovenia, Ireland and Northern Ireland.
Fiscal 2015 Results: Harvey Norman reported strong results in all three segments. The franchising operations segment increased 39.4% YoY to reach $200.4 million, up from $143.7 million, primarily due to a decrease of $21.8 million in the level of tactical support provided to franchises ($103.2 million in 2014 compared to $81.4 million in 2015). The property segment increased 9.3% YoY to reach $135.2 million, up from $123.7 million, due to a $20.4 million turnaround in the net property revaluation, whereas rental increases also reinforced the improved result. The retail segment reached $41.03 million, up by 42.9% YoY from $28.7 million, as a result of improved operational performance in the markets of New Zealand, Ireland and Northern Ireland. In the Australian market, much of Harvey Norman’s growth was achieved in Q3 and Q4 when the strength of the local market, along with a boost in property revaluations, skyrocketed the company’s net profit before tax to $378.1 million, up by 25.6% YoY from $301.1 million in 2014. Finally, the effective income tax rate for the FY 2015 was 28.9%, down by 0.6% compared to an effective income tax rate of 29.5% in 2014.
Dividend Policy: Harvey Norman consistently delivers dividend payments to its shareholders since 1997, with a dividend growth of 57.2%.
Future Outlook: Harvey Norman generates much of its earnings from electronics and furniture products, which both are a stable source of growth in the current volatile economic environment. The trend is expected to continue in the coming quarters, thus supporting Harvey Norman’s medium-term growth. Particularly, the property market in Australia remains on an upward trend, mainly due to renovation and clearance rates.