The residential construction industry offers plenty of options to make good money in the stock market. Generally, demand is driven by population growth, whereas the profitability of the largest homebuilders primarily depends on securing favorable building locations. However, to fully capitalize on the industry’s growth potential, investors should have an idea of how the housing market works.
For example, many analysts believe that, currently, the U.S housing market is in an expansion phase due to favorable supply of existing properties and a convenient supply of new homes available for sale. During an expansion phase, occupancy increases and as unoccupied buildings become scarce, homeowners raise the rents. The cycle reaches a point where rent growth is accelerating and investors are enticed to invest in housing stocks. In fact, the price of the land reflects the anticipated growth and as more investors enter the housing market, the growth starts to build up.
This article discusses three stocks that trade in the residential construction industry. Although their average dividend yield is below 3% (2.15%), all three companies are consistently delivering dividends and are efficient in managing their debt, thus leaving room for further growth in the coming quarters. 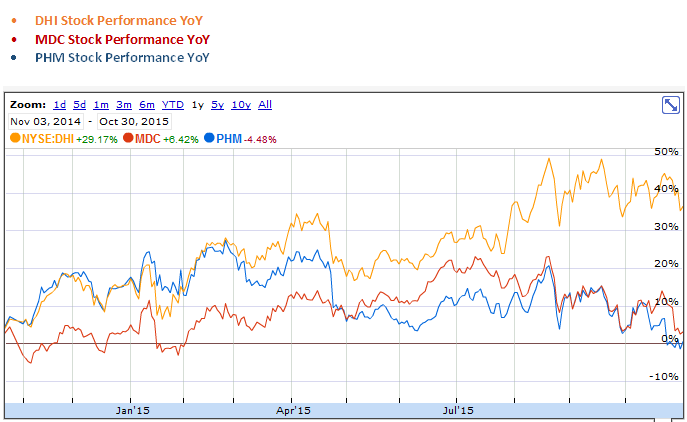 D.R. Horton (NYSE: DHI) is a homebuilding company located at Fort Worth, Texas, engaging in the acquisition and development of land as well as in the construction and sale of residential properties. It also provides mortgages and title insurance policies, as well as examinations and closing services. The company operates under several nameplates, including D.R. Horton, America’s Builder, Breland Homes, Crown Communities, Emerald Homes, Express Homes, and Regent Homes in 79 markets located throughout 27 states across the United States.
Q3 2015 Results: DHI revenues totaled $2.88 billion from $2.10 billion in Q3 2014, up by 37.1% YoY. Closings reached 9,856 homes, up by 28.4% from 7,656 homes in Q3 2014, at an average closing price of $290,000, up by 7% compared to the same quarter last year. The increase in revenues was primarily driven by a higher average sales price per square foot and larger average home size. Additionally, DHI’s net income almost doubled, up by 95.76% YoY, from $113.1 million in Q3 2014 to $221.4 million. Furthermore, the company’s operating cash flow turned to positive, from $-575.1 million to $188.6 million, generating a net cash flow of $143.8 million, up by 60.2% YoY from $-361.5 million.
Dividend Growth: DHI delivered an annual dividend of $0.25 to its shareholders, whereas from 2000 to 2015, DHI’s dividend growth is 56.3%, $0.0625 compared to $0.04.
Future Outlook: The company has demonstrated a solid revenue growth and it’s well-positioned to deliver strong results in the fourth quarter as well. Operating margins are expected between 35% and 40%, whereas operating cash flows are expected to reach $500 million for FY 2015. DHI plans to use this money towards debt maturities in order to further lower its long-term debt. The company’s current D/E ratio is 0.68, suggesting effective debt management. Analysts forecast an average EPS of $2.38 through 2018, up by 29.1% from the current EPS of $1.84, and an average annual earnings growth of 15.33% through 2020.

MDC Holdings (NYSE: MDC) is a Denver-based homebuilding company that provides homebuilding and financial services across the United States. The company operates through its subsidiaries and engages in the construction and sale of home properties through the Richmond American Homes name as well as in the provision of mortgages and property insurance coverage through its financial subsidiary, which also offers title agency services to homebuyers in Colorado, Florida, Maryland, Nevada, and Virginia.
Q3 2015 Results: MDC’s revenues reached $468.5 million, up by 12% YoY, from $418.4 million due to an increase of the average home price from $51,000 to $421,000, up by 14 YoY, which offset a small decline in closing by 1%. MDC’s net income declined by 4.4% YoY, from $15.5 million to $14.8 million due to an increase in selling expenses by 12% and an increase in the cost of goods sold by 12.4%, both as a result of an increase in the land and construction costs. On the upside, the company has managed to significantly lower its operating cash flow losses (from -$173.3 million to -$26.5 million) and its net cash flow losses (from -$116.2 million to -$30.8 million).
Dividend Strength: MDC is consistently delivering dividend payments to its shareholders since 2000, while dividend growth for the period 2000-2015 is 316.7%. Current annualized dividend per share is $1.00, yielding 3.85% and generating a payout ratio of 85%.
Future Outlook: MDC expects improved results in the coming quarters due to a higher number of homes in backlog. At the end of Q3 2105, the company had 2,587 homes in backlog, up by 38% YoY, with a value of $1.2 billion, up by 49% YoY. Also, in spite of the sustained closing delays due to limited subcontractor availability, analyst consensus estimates a four-year average EPS of $2.14 (current EPS is $1.18) and a five-year average annual earnings growth of 23.84%.


PulteGroup (NYSE: PHM) is a homebuilding company based in Atlanta, offering homebuilding and mortgage banking and insurance services through its subsidiary Pulte Mortgage LLC. The company operates under several nameplates, including Pulte Homes, Centex and Del Webb in 26 states and 49 markets across the United States and builds single-family homes to townhouses and condominiums.
Q3 2015 Results: PHM revenues reached $1.51 billion, down 5% from $1.59 billion in Q3 2014 as a result of a decline in closings by 6% to 4,356 homes, partially offset by an increase in the average selling price by 1% at $336,000. In addition, the tough weather conditions and the labor and land development delays that followed caused a decline in net income by 23.3%, $107.8 million from $140.6 million in the same quarter last year. Also, the company recorded a charge of $20 million following an unfavorable verdict over a contract dispute, which had a negative impact on the net income. On the upside, PHM’s margins close to 24% are the highest among its peers in the Residential Construction Industry, indicating the company’s great progress and growth potential. Also, PHM recorded a backlog of 9,000 homes of $3.1 billion total value, up by 18% compared to Q3 2014. This is the highest Q3 backlog figure for PHM since 2007.
Dividend History: PHM has doubled its dividend from 2000 to 2015 ($0.08 from $0.04), reaching an annualized dividend of $0.32.
Future Outlook: considering the company’s strength in backlog and land investment of $1.5 billion, which keeps PHM on track with the $2.3 billion milestone for land acquisitions and development in FY 2015, the management expects revenue growth in the coming quarters. PHM is well-positioned to capitalize on the growing U.S housing demand and expected economic growth that will help sustain higher gains in households and consumer spending. Analysts that follow PHM estimate an average EPS of $1.53 through 2017, up by 15% from the current EPS of $1.33, and an average earnings growth of 13% annually for the next five years.

Real Estate Weekly Outlook Reports that the US and China may be finally nearing an agreement on the long-awaited "Phase 1" of a trade deal propelled US equity markets to new all-time record highs, but also sent US Treasury yields surging to the highest levels since late July, with the 10-year yield jumping 20 basis points to close at 1.93%. With earnings season winding down and on a slow week of economic data, back-and-forth trade headlines dictated near-term sentiment as investors shunned... Read more

In a recent article, I explained why the Real Estate sector is a top-three sector for dividend-growth investors to target this quarter. In this quarter, I will dig deeper into the sector and highlight opportunities for yield, yield growth, and capital gains within the equity market that are not REITs. To start, the Real Estate sector is a tricky one from the equity perspective. You can't just go out and buy a share in a real estate development. There are ways to gain access, REITs are the... Read more