Large-caps usually deliver high dividends because such companies don’t use all their retained earnings to fund growth, so instead of reinvesting their earnings in the company, they are paying a percentage of it to their shareholders. On the other hand, there are also small-and mid-caps that also present strong financial results, leaving room for higher dividend yields and dividend payments.
The largest companies on the Toronto Stock Exchange (TSX) are listed in the S&P/TSX Composite Index, an index that mirrors the stock prices of remarkable dividend-paying stocks that usually yield more than 3%. In fact, by covering 95% of the equities market in Canada, the S&P/TSX Composite Index offers investors a solid insight on the trends and activity in these markets.
This article discusses three top-tier dividend-paying stocks; a small-, a mid- and a large-cap, trading in S&P/TSX Composite Index. All three companies are low-risk with an average beta of 0.52, whereas their average dividend yield is 6.60%, twice the magic milestone of 3%. All three companies possess the financial capacity to sustain their dividend payouts and continue delivering shareholder value in the coming quarters. 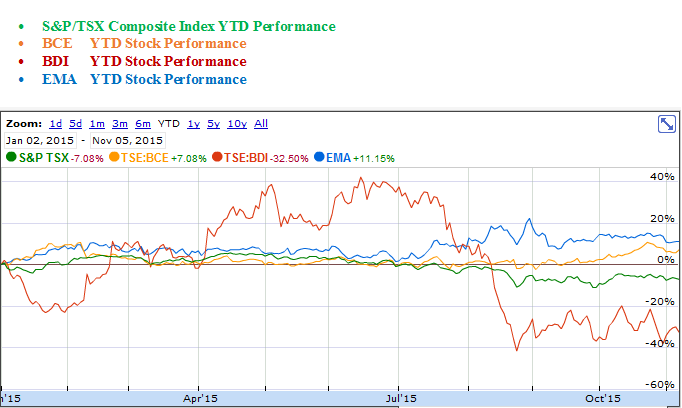 Bell Canada (TSE: BCE) is a Verdun-based communications company that provides an extensive range of communications solution to residential, business and wholesale customers in Canada. Bell Canada offers wireless, high-speed Internet, Internet protocol television (IPTV) and satellite TV, business Internet protocol (IP) broadband and information and communications technology (ICT) services through its segments and owns 106 radio stations in 54 markets across Canada with 17.4 million average listeners per week.
Q2 2015 Results: Bell Canada’s revenues reached $5.3 billion, up by 2% from $5.2 billion in the same quarter last year. What is impressive is the company’s 8.9% increase in operating income, $1.3 billion from $1.2 billion, and 24.9% increase in net income, $798 million from $639 million in Q2 2014. Bell Canada has also lowered its long-term debt by 4.4%, $15.4 billion from $16.1 billion in the second quarter of 2014, while its EBITDA grew by 5.3% YoY, generating a strong EBITDA margin of 46.6%. The company’s focus on its strategic initiatives is paying off, considering that Bell Canada has strong YoY EBITDA growth for 39 years.
Dividends and Payout Ratio: Bell Canada’s strong results allow the company to deliver strong dividends and increase its payout ratio. Currently, the company delivers an annualized dividend of $2.60, yielding 4.62% at a payout ratio of 88%. By implementing its dividend growth model, Bell Canada’s management expects to maintain a conservative free cash flow payout ratio between 65% to 75%. Analysts that follow Bell Canada estimate a dividend yield of 4.595 and 4.81% for 2015 and 2016, respectively.
FY 2015 & 2016 Forecasts: Canada’s telecom industry is characterized by dynamic competition that enables Bell Canada to deliver consistent results. In 2015 and 2016, revenue estimates are $21.5 billion and $21.8 billion, respectively. Similarly, net income is expected to reach $2.6 billion and $2.9 billion, respectively. Bell Canada’s momentum is expected to take the company forward with strong FY 2015 results and a sustained high level of customer retention.

Black Diamond Group (TSE: BDI) is an Alberta-based company engaging in the provision of modular accommodation, workspace rental fleet and oilfield products and related services in a wide range of industries in Canada, the United States and Australia. At the end of 2014, Black Diamond’s workforce housing rental fleet was about 3,332 units, modular workspace rental fleet was approximately 3,536 units, while the modular accommodation and workspace rental fleet of its international segment had reached 1,197 units.
Q2 2015 Results: Black Diamond’s results are strongly impacted by low commodity pricing, primarily due to business activity in western Canada and Australia. Q2 2015 revenues were $71.1 million, down by 19.6% YoY from $88.4 million in Q2 2014. Likewise, operating income was down 61.2%, $8.1 million from $20.9 million in the same quarter last year, whereas net loss for the quarter was $0.8 million, down 109% from $9.6 million in Q2 2014. Quarter losses were further triggered by a 20% increase in the statutory corporate tax rate in Alberta, which has unfavorably impacted Black Diamond’s annual effective tax rate – without the increased Alberta income tax rate, Black Diamond would have reported a Q2 2015 net income of $2.6 million. On the upside, the company has lowered its operating expenses by 7.1%, $63.1 million from $67.5 million in Q2 2014 due to a strategic cost initiative that includes lower bonuses, commission costs and share-based compensation costs. The initiative has led to lower administrative expenses for the quarter by 12.7%, $12.6 million from $14.2 million. Black Diamond’s Q3 2015 results will be released on Nov 6.
Dividends and Payout Ratio: Black Diamond’s annualized dividend is $0.96, yielding 10.7% and generating a payout ratio of 259%. For 2015, analysts estimate a dividend yield of 13.1% and for 2016, 12.9%. Also, Black Diamond’s dividend growth for the period 2012-2015 is 33.3%.
FY 2015 & 2016 Forecasts: FY 2015 estimated revenues are $318 million, net income $18.1 million and total debt 178 million, down by 8% from current total debt of $192.3 million. FY 2016 estimated revenues are $310 million, net income $23.6 million and total debt $169 million. In spite of the challenging market conditions, Black Diamond maintains a strong balance sheet as a result of higher operating leverage due to its rental fleet and success in all end markets. Weak pricing in commodities is expected to continue until a recovery in oil, gas and/or mined minerals triggers increased utilization in Black Diamond’s end markets.


Emera (TSE: EMA) is a Halifax-headquartered company engaging in the generation, transmission and distribution of electricity, gas and utility energy to Canada, North America and four Caribbean countries. Emera’s core assets include Nova Scotia Power (44%) and Emera Maine (11%), while other regulated investments are Emera Caribbean Inc., Emera Newfoundland/Labrador Transmission, and pipelines.
Q2 2015 Results: Emera’s revenues increased 3.7%, from $512.3 million to $494.1 million. The growth was primarily driven by the company’s New England gas plants, which reached $75.7 million, up by 186% YoY. Additionally, net income reached $48 million, up by 8.6% from $44.2 million in Q2 2014 due to higher contributions from Emera Maine segment and the impact of a stronger USD. On the downside, operating income was down by 5.2% to $537 million from $566.5 million in the same quarter last year, mainly due to lower revenues at the New England gas generating facilities, whereas operating cash flow decreased 8.3% down to $376 million from $410 million in Q2 2014, mainly as a result of lower trading margins. Emera’s Q3 2015 results are expected to be released on Nov 13.
Dividends and Payout Ratio: Emera’s dividend growth for the period 2013-2015 is 14.3%. Currently, EMA delivers an annualized dividend of $1.90, yielding 4.43% at a payout ratio of 79%. 2015 yield is expected at 3.83% and 2016 yield at 4.48%. The company has also raised its annual dividend growth target from 6% to 8% through 2019 following the projected earnings from the Maritime Link and New England gas facilities.
FY 2015 & 2016 Forecasts: Estimated revenues are $2.9 million and $4.9 million for 2015 and 2016 respectively, whereas net income is expected to reach $299 million and $387 million in 2015 and 2016 respectively. The average EPS through 2017 is estimated at $2.62, up by 9.6% from the current EPS of $2.39. Conversely, total debt is expected to reach $4.16 million and $11.28 million in 2015 and 2016, respectively, up by 12.1% and 203.7% from current total debt of $3.71 million. However, the company’s positive Q2 2015 results, coupled with expected earnings from the Maritime Link project, indicate that Emera has the financial ability to continue delivering strong cash flows and meet its growth targets.

What Canadian Dividend Aristocrats Should You Add To Your Portfolio?

The Canadian stock market is home to many excellent dividend growth stocks with a long history of dividend payments. S&P tracks a Canadian Dividend Aristocrat Index which is similar to the US Dividend Aristocrat Index. There are several difference, however. The requirements for inclusion in the Canadian index are lower than for the US index. Requirements for Inclusion The Canadian Aristocrats index consists of stocks that have 5 years of consecutive dividend increases A company can maintain... Read more