In the current economic climate, investors are reducing their exposure to volatile equity markets in favor of natural resources and commodities that offer better capital protection and income generation. One of the key natural resources for this cause is timber.
Timber is often used as a hedging tool against inflation. In fact, over the last century, timber investments outperform the inflation rate by nearly 3%, thus becoming a perfect low risk inflation hedge. What distinguishes timber from other commodities is that, when harvesting conditions are bad, it is possible to let the trees grow and wait for a more profitable time to sell the wood. This is not possible with corn or wheat, which have to be harvested each year. Therefore, timber makes a great investment because it is less volatile and less prone to seasonality.
This article discusses three stocks trading in the Lumber & Forestry sector of the Toronto Stock Exchange. Since 2008, the demand for timber has been consistently increasing due to a growing demand for wood-related products. Also, as the U.S. housing market is picking up, the demand for timber keeps on increasing. 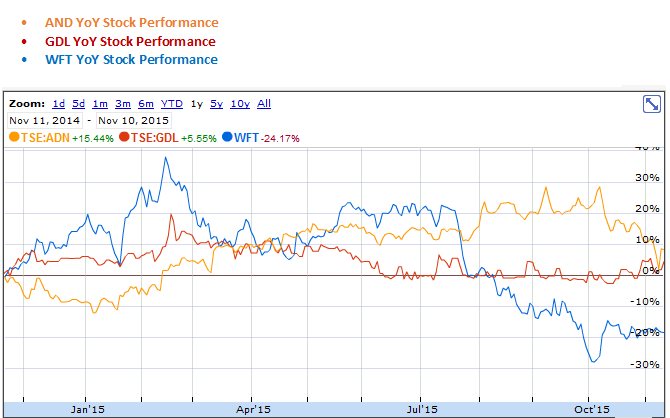 Acadian Timber (TSE: ADN), a Vancouver-based company, provides softwood and hardwood primary forest products in Eastern Canada and the Northeastern United States. Acadian Timber owns and manages nearly 761,000 acres in New Brunswick and 299,000 acres in Maine, US, while it also owns and operates a forest nursery in New Brunswick. The company operates via two segments, NB Timberlands and Maine Timberlands.
Q3 2015 Highlights: Acadian Timber reported revenues $22.6 million, up 4.9% YoY from $21.6 million in the same quarter last year, due to improved pricing across its product line and effective operations. As a result, the company’s operating income reached $6.3 million, up by 14.3% YoY from $5.5 million in Q3 2014. In addition, by generating free cash flow of $5.2 million, up 10.6% YoY from $4.7 million in Q3 2014, Acadian Timber has built a comfortable level of surplus cash, which has allowed room for a dividend increase.
Dividend Growth: in Q3, Acadian Timber has increased its annual dividend to $1.00 per share, effective in Q4 2015. For the period 2008-2015, Acadian Timber’s dividend growth is 226.1% ($0.225 from $0.069). Given the company’s sustained strong performance, the company is expected to continue providing its shareholders with dividend payments or even increase its dividend payments ($11.3 million YTD at a current payout ratio of 43%).
Future Outlook: Acadian Timber’s strong Q3 2015 results as a result of effective pricing and full shift in the company’s regional sawmills that have kept inventories at normal levels, allow plenty of room for a very stable dividend. Although the weak Canadian dollar and weak offshore export markets are expected to put pressure on lumber prices in the coming quarters, strong pricing will offset a potential decline and operational effectiveness will remain stable.

Goodfellow (TSE: GDL) is a Delson-based company, engaging in the re-manufacturing, supply and brokerage of lumber and wood products. Goodfellow is one of the largest independent re-manufacturers and distributors of decking, flooring, insulation and roofing to retailers, industrial and manufacturer clients in Canada and the United States.
Q3 2015 Highlights: Goodfellow is achieving strong sales of treated wood and has effectively launched new products in its top line. Although operating expenses have reached $23.0 million, up 8.5% YoY from $21.1 in Q3 2014, due to increased production and higher selling expenses related to increased sales performance, the company’s Q3 2015 results are improved compared to the same quarter of 2014. More specifically:

Dividend History: Goodfellow consistently delivers dividend payments to its shareholders since 2003. The company’s dividend growth from 2003 to 2015 is 344.4%, while its current annualized dividend per share is $0.20, yielding a payout ratio of 26%.
Future Outlook: Given Goodfellow’s strong operating performance, the company is expected to sustain strong results in the coming quarters. Although the low activity in the construction market and low commodity prices may hamper production and sales activity, Goodfellow plans to implement a cost constrain strategy to protect its profitability. The company’s strategy, combined with its newly-launched value-added products, is expected to support its strong results in Q4 and in 2016 as well.


West Fraser Timber (TSE: WFT) is a Vancouver-based timber company operating in the wood business for residential, commercial and industrial use. The company provides retailers, wholesale distributors, and re-manufacturers in the Western Canada and Southern United States with a wide range of wood products, including lumber, southern yellow pine (SYP), panels, pulp, newsprint and wood chips.
Q3 2015 Results: Q3 results reflect the sustained oversupply of lumber in key markets, which was further worsened by a sharp decline in demand from China. West Fraser Timber reported revenues of $1.04 million, up 1.4% YoY from $1.03 million in Q3 2014. On the downside, operating income was $88 million, down 20.7% YoY from $111 and net income was $56 million, down 20% YoY from $70 million in the same quarter last year due to strong U.S dollar and a decline in the U.S SYP and low-grade SPF lumber prices.
Dividend History: In terms of dividend payments, West Fraser Timber is consistently delivering an annualized dividend of $0.28 since 2011, yielding at 0.60% and a payout ratio of 17%. For FY 2015 and 2016, analysts estimate the same dividend payment of $0.07 per quarter.
FY 2015 & 2016 Outlook: The company’s lumber business is improving in spite of a significant slowdown in the Chinese market. In the U.S. volatility in the housing market starts to stabilize slowly. For FY 2015 and 2016, analysts estimate revenues of $4.1 million and 4.4 million, respectively, and net income of $174 million and $362 million, respectively. The company’s total debt is expected to be $520 million and 21.3 million in 2015 and 2016, (current total debt is $466 million). The company will continue to seek capital projects that could add value to its business.