Stocks that pay monthly dividends can be a great choice for investors seeking a steady income. In spite of the market volatility, there are several companies trading in the Real Estate industry that can meet the criteria of income-focused investors, mainly due to the wide range of investment opportunities that these companies can take advantage of. Furthermore, the Real Estate Investment Trusts (REITs) can reinvest their earnings, thus delivering shareholder value to their stockholders.

This article discusses three large cap companies trading in the REIT industry. With an average dividend yield of 3%, and an average payout ratio of 126%, well-above the industry average payout ratio of 31.67 %, all three companies invest in a diversified portfolio of properties across the United States, thus leveraging risk and offsetting potential losses in their cash flows. An average beta of 0.65 suggests that all three REITs are safe investments. 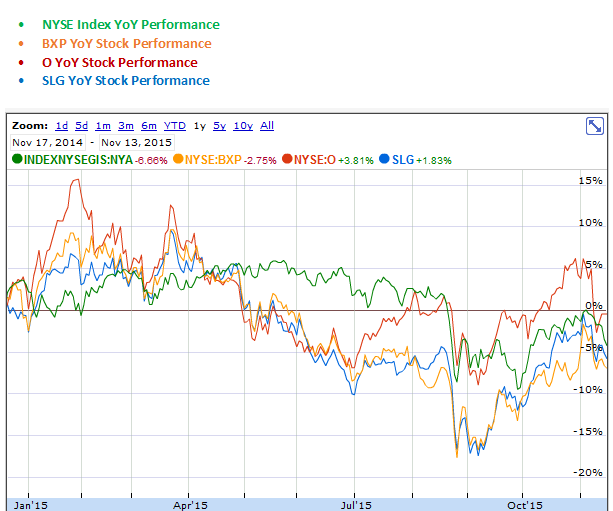 Boston Properties (NYSE: BXP) is a Boston-based, self-managed REIT company that engages in the tenure and development of office properties in Boston, Washington, D.C. New York, San Francisco, and Princeton. Boston Properties is one of the largest owners, managers and developers of Class A office properties across the United States with a leading track record in developing first-class Central Business District (CBD) office buildings, suburban office centers and build-to-suit projects for the U.S. government and a wide array of reliable tenants.


Future Outlook: Boston Properties remains active in acquisitions, dispositions and developments. For 2016, the management expects FFO growth of approximately 4% YoY mainly due to its well-positioned portfolio and high occupancy rates. This makes up for an FFO per share in the range of $5.46–$5.48 in 2015, and $5.50–$5.70 in 2016. Occupancy is expected to improve further, thus increasing the company’s net income. Analysts forecast an EPS of $6.08, twice the current EPS of $3.97, and an average 5-year earnings growth rate of 6.75% per annum.

Realty Income (NYSE: O) is a Colorado-based REIT company engaging in the acquisition and leasing of retail and rental-income properties under long-term agreements. Boasting a diversified portfolio of more than 4,400 properties, both leased and available for lease, O has 236 different tenants in 47 different industries across 49 states and Puerto Rico.

Financial Highlights Q3 2015: Realty Income’s financial performance as it approaches the end of the year, was strong. The company’s revenues reached $258.89 million, up 9.8% YoY from $235.71 million in the third quarter of 2014, whereas its adjusted funds from operations (AFFO) per share increased by 9.4%, hitting a record high of $0.70 in the quarter. Furthermore, Realty Income realizes positive results from its re-leasing strategy, thus expecting a FY 2015 AFFO in the range of $2.69 to $2.74. Realty Income’s net income, up by 4.8% YoY from $57.9 million to $60.7 million, combined with its increased AFFO, indicates a strong operational performance. In addition, the company’s diversified portfolio contributes 79% to its rental revenue cash flows, thus making Realty Income a safe bet for dividend investors.

Dividend Growth: also known as the monthly dividend-paying company, it is estimated that Realty Income has delivered more than $3.6 billion in monthly dividends paid to shareholders since 1969 with an 4.4% dividend growth since 2000. The company has paid 543 consecutive monthly dividends and has achieved 72 consecutive quarterly dividend increases. Its current annualized dividend per share is $2.28, yielding 4.81% at a payout ratio of 207%.

Future Outlook: the key factor that differentiates Realty Income from its peers, beyond the long and consistent history of increasing quarterly dividends, is its geographic and industry diversification as well as its high occupancy rates. Given that the average occupancy rate in the first three quarters of 2015 is 98%, and that Realty Income’s properties are capitalizing on regional and economic differences, it is expected that the company will continue delivering strong results. Analyst consensus estimates an average earnings growth rate of 4.53% for the next five years at an average EPS of $2.86, up by 159.7% from the current EPS of $1.10.


SL Green Realty (NYSE: SLG) is a self-managed REIT company that operates in the property acquisition, development, management, financing, construction and leasing across the United States. Headquartered in New York, SL Green Realty invests in commercial office and retail properties through its Real Estate segment and Debt and Preferred Equity Investment segment. It is estimated that SL Green Realty manages approximately 336,201 sq. ft. office building owned by a third party, while it holds a book value of $1.4 billion of debt and preferred equity investments.

Effective acquisition strategy: SL Green Realty’s well-structured and perfectly implemented strategy has managed to leverage the structural complexity by capitalizing on favorable real estate market opportunities, including the acquisition of Eleven Madison Avenue for $2.6 billion and the SoHo building at 110 Greene Street, among others. A total of $1.7 billion of aggregated transactions is expected to generate nearly $680 million of net proceeds. In addition, SL Green Realty boasts a leasing activity of 1.4 million sq. ft., 40% higher than the average of 1 million sq. ft. of the last three quarters, suggesting that the leasing market did not go slow, in spite of the market volatility.

Dividend Growth: SL Green Realty consistently delivers dividends to its shareholders since 2000 with a dividend growth of 65.5% (from $0.3625 to $0.6). The company’s consistency and payout ratio of 105% has created an investor base of loyal stockholders who is taking a calculated risk by investing in SL Green Realty, given the volatility of the real estate market.

Future Outlook: SL Green Realty’s Q3 2015 strong results in both its segments suggest a successful execution of its acquisition and reinvestment strategy. Taking into account these results and looking ahead to 2016, analysts estimate an average EPS of $6.93 by 2018 (the current EPS is $2.28) and an average earnings growth of 6.35% per year through 2020.

SL Green Realty Corp. (NYSE: SLG), Manhattan’s largest office landlord, today announced that its board of directors has declared a monthly ordinary dividend of $0.3033 per share of common stock. The dividend is payable in cash on April 15, 2021 to shareholders of record at the close of business on March 31, 2021.... Read more

SL Green Realty Corp. (NYSE: SLG), Manhattan’s largest office landlord, today announced that its board of directors has declared a monthly ordinary dividend of $0.3033 per share of common stock. The dividend is payable in cash on March 15, 2021 to shareholders of record at the close of business on February 26, 2021.... Read more

SL Green Realty Corp. (NYSE: SLG), Manhattan’s largest office landlord, today announced that its board of directors has declared a monthly dividend of $0.3033 per share of common stock. The dividend is payable on February 16, 2021 to shareholders of record at the close of business on January 29, 2021.... Read more