Nearly 67% of the U.S. gross domestic product (GDP) comes from retail consumption and therefore, how many retail stores open and close during the year is a key indicator of the overall performance of the U.S. economy. As a result of the recent financial crisis, volatility in the financial markets and shifting in consumer preferences, a significant number of retail stores have ceased operations in 2015. On the upside, according to U.S. Census Bureau, total annual U.S. retail sales have increased 4.4% on average in the period 1993-2015.

According to the 2015 Global Powers of Retailing report, 76 of the largest retailing companies in the world are based in the U.S, operating both domestically, and internationally with a strong retail presence. Two of these companies are discussed in today’s article, mainly because they are also consistent dividend payers with a strong financial potential. 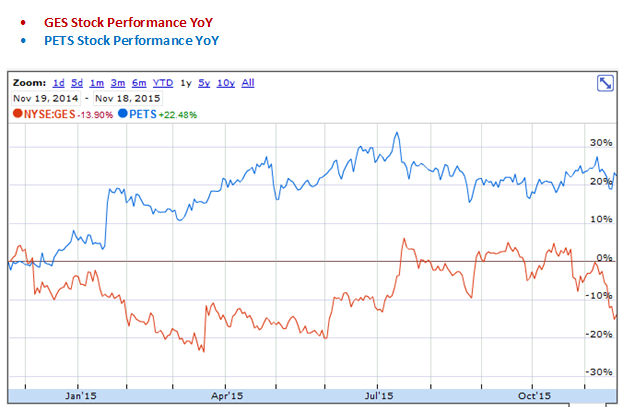 Guess? (NYSE: GES) is a Los Angeles based company that engages in the design, marketing, distribution and licensing of lifestyle collection and contemporary apparel for men, women and children both in the United States and internationally. Through five segments, North American Retail, North American Wholesale, Europe, Asia, and Licensing, GES markets its products directly to consumers and wholesalers. The company’s current network consists of 470 retail stores in the U.S. and Canada and 361 retail stores in Europe, Asia, and Latin America. Furthermore, GES operates 836 retail stores through licensing.

Financial Highlights FY Q2 2016: Guess’ presence in 90 countries allows the company to diversify risk. Compared to FY Q2 2015, the company’s results are mixed: Revenues down 51.7% YoY, $546.26 million from $1,131.1 million; Operating income down 6% YoY, $26.2 million from $27.9 million, and Net Income down 7.9% YoY, $18.29 million from $19.85 million. These results are the outcome of the negative impact of foreign currency on the company’s financials. However, on the upside, Guess reported operating expenses down 52.9% YoY, $520.1 million from $1,103.2 due to lower selling, general & administrative expenses in this quarter. Guess’ management plans to raise the tax rate from 34% to 36% by the end of the FY 2016, as the foreign currencies are expected to remain roughly in their current rates. In addition, the company’s total current liabilities were down 11.4% YoY ($319.22 million from $360.17 million), and its long term debt was down by 69.4% YoY ($2.06 million from $6.74 million), suggesting a financially strong company. Also, despite the decline in revenues, Guess gross margin reached 36% due to higher markups in the Europe and Latin America segments to offset the foreign currency movements. Guess has a dividend growth of 275% for the period 2000-2015 and it consistently delivers value to its shareholders.

Future Outlook: the management of Guess seeks for an operating margin in the range of 5% to 6% for 2016, taking into account the impact of the foreign currency movement. Analyst consensus estimates an EPS between $0.89 and $1.02, lower than the current EPS of $1.13, due to the currency headwind. However, the company seeks expansion opportunities in China, aiming to improve its operations and grow its business.


PetMed Express (Nasdaq: PETS) is the leading pet pharmacy in the United States. The Florida-based company provides prescription and non-prescription pet medications for arthritis, thyroid, diabetes, antibiotics as well as specialty medications and generic substitutes through its subsidiaries. It also sells health products and supplies for dogs and cats to retail customers. PETS operates through 1-800-PetMeds and it markets its products through its website, as well as direct print and mail catalogs and brochures.

This weekly article series covers dividend increase announcements. A summary table provides relevant data and key statistics. As a bonus, I include ex-dividend dates for the next two weeks. Following requests from readers, I've added a section covering COVID-19-related dividend cuts and suspensions. I monitor dividend increases for stocks in the Dividend Champions List [CCC list]. The CCC list is separated into three categories based on how long companies have... Read more

All stocks have at least five fiscal years of dividend growth history and come from the U.S. Dividend Champions List.Ten increases for next week (up from four last week).An average increase of 4.77% and median increase of 3.47%.Introduction This article series is designed to keep investors informed of upcoming dividend increases. For dividend growth investors, this can be an opportunity to start or add to positions prior to a new increased payout. This can be especially... Read more