Consider a Healthy Dividend Stock from the Medical Sector

Small-cap stocks are viewed as good investments due to their growth potential. It is estimated that small caps represent nearly 52.2% of publicly traded stocks, drawing much of the analysts’ attention. On the other hand, not all large caps absorb the risk involved and therefore investing in large caps may be riskier than selecting a small-cap with a lower valuation.

The article discusses three companies, one small-cap and two large-caps, that trade in the Medical Appliances & Equipment Industry. From the analysis, it becomes evident that it is not always about the market cap of a company, but primarily about a company’s ability to capitalize on growth opportunities and be able to sustain dividend growth, as it happens in this case with the small-cap. 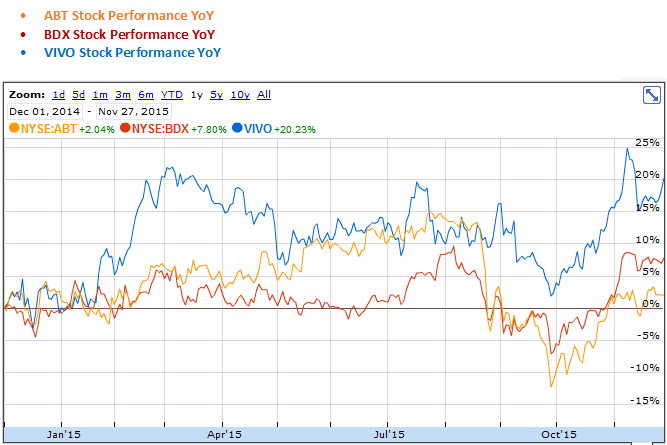 Abbott Laboratories (NYSE: ABT) is an Illinois-based health care company and a leader in the manufacturing and sale of health care products both in the U.S and worldwide. Becton, Dickinson and Company sells branded generic pharmaceuticals, diagnostic systems and tests, and pediatric and adult nutritional products through its segments to retailers, wholesalers, hospitals, health care facilities, laboratories, physicians’ offices, and government agencies.

Mixed Q3 2015 Financials: Becton, Dickinson and Company Q3 2015 results were mainly driven by growth in emerging markets and the sustained strengthening of the U.S. dollar. Healthcare growth and demand remained strong notwithstanding challenges in the emerging economies, leading to a double digit organic growth led by Nutrition, branded generics and Diagnostics segments. Growth in the emerging markets continues to overtake growth in the developed markets as the need for healthcare products is growing faster than overall economic growth in these markets. Compared to Q3 2014, Abbott Laboratories’ results are as follows:

Future Outlook: ΑΒΤ continues to improve its gross margin 57% from 54% in Q3 2014, while for the FY2 2015, the management expects a gross margin close to 58%. Additionally, financing investments for the development of innovative product offerings is expected to continue. Analyst consensus estimates an average EPS of $2.54 for the next three years, lower than current EPS of $3.00 and average long-term growth earning rate of 10.03% annually.

Becton, Dickinson and Company (NYSE: BDX), a New Jersey-based medical company, engages in the development, manufacturing and sale of medical devices and instrument systems both in the U.S and worldwide. The company’s innovative solutions are distributed through various independent distribution channels, sales representatives, healthcare institutions, clinical laboratories, and general public. BDX’s current network comprises of more than 30,000 associates in 50 countries, whereas its subsidiary CareFusion is a global leader in the provision of medical technology.

Effective Strategic Acquisitions: through the acquisition of CareFusion, Becton, Dickinson and Company has significantly expanded its presence in the medication management industry. In addition, through the acquisition of Cellular Research and GenCell, the company has entered the high-growth area of genomics and is well-positioned to enjoy long-term growth in these areas with cost-effective technologies.

2016 Outlook: for 2016, the company’s management expects circa 10% growth in emerging markets driven mainly by diversification in population in China and sustained growth in Indiaand Brazil. In addition, CareFusion revenues in the developed markets are expected to account for 16% of total revenues with China accounting for 5% of total revenues. Analysts that follow Becton, Dickinson and Company estimate an average EPS of $9.95 up to 2019 and an average earnings growth of 11.11% for the next five years.

Future Outlook: Meridian Bioscience’s growth opportunities include geographic expansion, sustained innovation, focus on new products, and launch of new vertical market segments where resourceful diagnostics and tools are required. The company’s proven record of financial adeptness is expected to continue in the coming quarters primarily due to Meridian Bioscience’s strategic investments and acquisitions. Additionally, the company’s strong financial performance is further sustained by increased investor confidence as expressed in the stocks 20.23% YoY performance, well above the YoY performance of its peers. In terms of EPS and earnings growth, analysts forecast an EPS of $0.94 through 2018, up 10.2% from current EPS of $0.85 and 16% five-year annual earnings growth.

These Are The Top 3 Sectors For Dividend Growth Investors Now

Finding Growth In A No-Growth Market With the second quarter earnings cycle underway the question arises, what sectors should dividend growth investors be targeting? Growth in the second quarter is expected to be negative, estimates for future quarters has fallen and there is a risk the earnings recession that began in the first quarter could extend itself to three quarters. My criteria for this analysis is simple: which sectors have the best outlook for growth this quarter, the... Read more

Actionable Conclusions (1-10): Analysts Augur Top Ten Healthcare "Safer" Dog Stocks to Net 2.57% to 55.34% Gains To May, 2018 Eight of the ten top dividend Healthcare dogs (shaded in the chart above) were verified as being among the top ten yielders for the coming year. Based on analyst 1 year target prices, the dog strategy for this Health group as graded by analyst estimates for May proved 80% accurate. Ten probable profit generating trades were illustrated by YCharts analytics for... Read more

The Dividend Dogs Rule The "dog" moniker was earned by stocks exhibiting three traits: (1) paying reliable, repeating dividends, (2) their prices fell to where (3) yield (dividend/price) grew higher than their peers. Thus, the highest yielding stocks in any collection became known as "dogs." More specifically, these are, in fact, best called, "underdogs". Which Industries Show Up As "Safe" In The Healthcare Sector? Eight of ten healthcare industries composing the sector, were... Read more

Review and Outlook It's been a solid start to the year as the S&P 500's return of 1.9% was almost mirrored by my 1.5% return. After the dramatic returns of November and December, it makes sense to me that the markets would take a breather before deciding on the next move. No Trump talk from me this month - not because it isn't relevant, but because: 1) he is already the subject of thousands of mentions on Seeking Alpha, and 2) no one has any idea what is going to happen next - let alone... Read more