The pet industry has flourished despite the economic adversity. The industry has grown into a multibillion dollar market that is expanding at a robust pace. The market's potential is tremendous and equity investments in the sector promise to produce generous returns over time.

The pet industry growth is driven by the buoyant pet ownership trends. According to the American Pet Products Association, almost two thirds or some 72.9 million U.S. households now own a pet, which is a record high. Similar trends are observed in the continental Europe and United Kingdom. About 70 million European households own at least one pet. Separately, some 46% or 12 million UK households have a pet. Pet ownership in emerging markets has also reached all-time highs.

Intensely growing pet ownership has bolstered spending on pet food and services. Worldwide sales of pet food totaled $65.8 billion in 2011, a 4% real-terms increase compared to the year earlier. At the same time, food care sales, including veterinary care, reached $94.5 billion last year, up 2.3% in the real terms from 2010, according to Euromonitor International. In the world's largest market, the United States, pet industry sales have grown at an average nominal rate of 7% a year over the past decade to a record $51 billion in 2011 (see below the chart Total U.S. Pet Industry Expenditures). Mintel, a market research firm, forecasts that U.S. sales are expected to rise by 33% over the next five years to almost $68 billion. In Europe, overall sales of pet food and care products totaled $32 billion. Especially robust growth has been in Latin America, expanding 44% between 2006 and 2011. Brazil, now the world's second largest pet care market is growing by 17% a year. Indiais expanding by 10%-15% a year. These statistics paint a rosy picture of the global pet industry outlook. 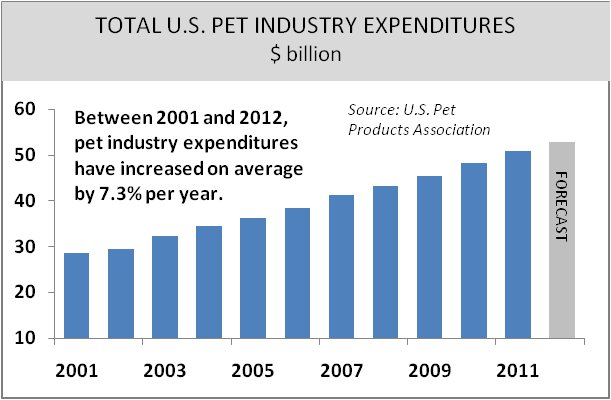 The bright outlook for the pet industry suggests that firms operating in this industry stand to benefit from the robust trends. There are several publically-traded companies serving different market segments, including pet food, veterinary services, pet supplies including grooming products, and other segments.

For instance, among two largest pet food companies (see below the chart World's Top 5 Pet Food Companies) are large diversified consumer goods companies such as Colgate-Palmolive (NYSE: CL) and Procter & Gamble (NYSE: PG). These two are, respectively, the world's third and fourth largest pet food companies by revenues. Colgate-Palmolive produces popular Hill's Pet Nutrition brands, realizing as much as $3.4 billion in revenue in 2011. Procter & Gamble manufactures Eukanuba and Iams brands, bringing in about $3.3 billion annually. These brands compete with the widely popular brands of Mars Inc. (e.g. Cesar, Pedigree, Whiskas, etc.) and Nestle SA (e.g. Dog Chow, Puppy Chow, Purina One, etc.). Both Colgate-Palmolive and Procter & Gamble pay dividends, yielding 2.5% and 3.6%, respectively. The two companies are expected to grow their earnings per share (EPS) at average rates of nearly 9% and 8% a year, respectively, over the next five years.

There are also several smaller firms providing pet care products and services. PetMed Express (Nasdaq: PETS) operates a pet pharmacy in the U.S. The company has seen sales increase more than 4.3 times over the past decade. Analysts forecast that its EPS will grow at a robust 11.4% rate a year over the next half-decade. The company pays an attractive dividend yield of 5% on a payout ratio of 75%. The company's dividend has increased 28% a year over the past three years. The stock is up 4% in a year. It has appealing valuation, as the stock is trading below industry metrics.

Another opportunity for investment in the industry is PetSmart (Nasdaq: PETM), a $7.3 billion retail chain selling specialty pet supplies. The company has seen revenue growth averaging 10% a year over the past decade. In the next five years, the company's EPS will rise at an average annual rate of 16.2%. The company pays a dividend yielding 0.8%. PetSmart's stock has skyrocketed to $66.60 a share, rising 55% in a year. It is slightly undervalued relative to the industry; however, its P/E is well above the company's 5-year average ratio.

Stocks of these companies have been buoyed by the vigorous industry growth. As the industry expansion is expected to continue, these stocks are likely to see favorable demand in the future.

This weekly article series covers dividend increase announcements. A summary table provides relevant data and key statistics. As a bonus, I include ex-dividend dates for the next two weeks. Following requests from readers, I've added a section covering COVID-19-related dividend cuts and suspensions. I monitor dividend increases for stocks in the Dividend Champions List [CCC list]. The CCC list is separated into three categories based on how long companies have... Read more

All stocks have at least five fiscal years of dividend growth history and come from the U.S. Dividend Champions List.Ten increases for next week (up from four last week).An average increase of 4.77% and median increase of 3.47%.Introduction This article series is designed to keep investors informed of upcoming dividend increases. For dividend growth investors, this can be an opportunity to start or add to positions prior to a new increased payout. This can be especially... Read more