Constructing a dividend growth portfolio requires selecting the safest stocks under the belief that they can meet your financial goals. Often, the outcome you expect doesn’t match the real picture of your portfolio returns, thus compromising your financial freedom.
Although many analysts and investors consider that to build a dividend growth portfolio you should invest in small cap stocks, there are fantastic blue chips that offer the opportunity to seek for higher yields, thus generating more dividend income.
This article discusses Wal-Mart, the leading company in the discount retail industry, a real blue chip stock that trades at a fair price, yet it is cheaper than its peers. However, Wal-Mart offers a strong competitive edge, justified financials, effective strategy and, above all, the safety of investing in the long-run. 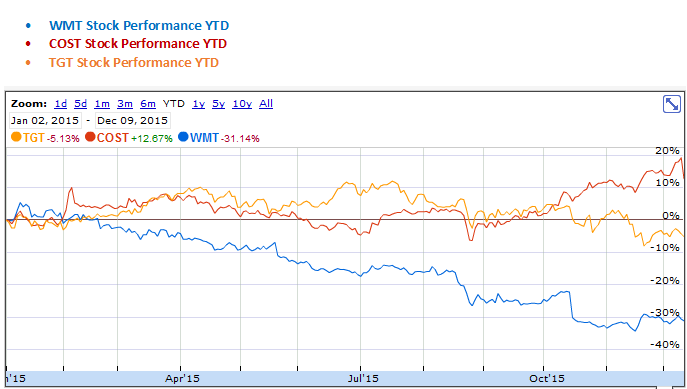 Wal-Mart Stores (NYSE: WMT), the largest discount retailer in the world based in Arkansas, engages in the retail and wholesale of a wide range of merchandise across the United States, Puerto Rico and internationally. The company follows an everyday-low-price (EDLP) policy and offers its products through the Walmart U.S., Walmart International, and Sam’s Club segments. In addition, Wal-Mart operates several banks that offer consumer financing programs. Wal-Mart’s current network consists of 532 stores both in the U.S. and in 28 countries around the world, and ecommerce Websites in 11 countries.

The decline in operating income is fully justified by the company’s decision to invest $1.2 billion in digital capabilities. The company seeks to offer a seamless store experience by focusing on creating shareholder value, providing customer satisfaction and seeking for growth in niche e-commerce markets like China. The acquisition of the Shanghai-based Yihaodian e-commerce in July is a strategic move that indicates how Wal-Mart supports an emerging cluster of digital capabilities to enhance customer satisfaction. The company’s Selling, General & Administrative (SG&A) expenses were up 3.2% ($24.25 billion from $23.49 billion) as a result of the effective acquisition strategy. Additionally, Wal-Mart is investing heavily in people by attracting talented work-force and raising the base pay and reward level to increase employee satisfaction.


Future Outlook:
Wal-Mart expects inflation to remain low compared to 2014. The pressure will be reflected in the Q4 2015 results, but the company is prepared to take strategic actions and anticipate potential headwinds. In terms of balance sheet, currency is expected to remain a major headwind, leading to flat earnings, whereas excluding the impact of the currency, the company would realize about 3% net sales growth for FY 2016. In terms of EPS, analysts expect an average EPS of $4.61, in line with the current EPS of $4.67, through 2019.

Costco plans to end FY 2015 with 24 new net openings and 687 Costco retail stores worldwide, including the UK, Taiwan, Korea, and Mexico. In addition, the company plans to open between 15 and 18 new warehouses until the end of 2015 or April 2016. In terms of geographic expansion, the management expects stronger sales in the Midwest and California as well as in Australia, Mexico and Taiwan, all in local currency. Analyst consensus estimates an average EPS of $6.74 for the next four years, up 25.5% from the current EPS of $5.37.

Costco Stock Dividend Immune to COVID-19 Businesses that “sell the basics” have thrived during the COVID-19 pandemic. The products they sell may not make for the best conversation, but they’re always in demand. Even in a pandemic, people still need essentials like toothpaste, paper towels, cereal, and laundry detergent. That has resulted in tidy returns for the shareholders of these businesses. In my paid advisory Passive Monthly Income, I’ve covered the soaring stock prices... Read more

How an Out-of-Favor Dividend Stock Delivered Oversized Returns “It may take a while for the company to execute its turnaround plan but, at the current valuation and dividend yield, TGT stock could be an opportunity.” That’s what I wrote about Target Corporation (NYSE: TGT) in Income Investors back in June 2017. In that piece, I explained why TGT stock, which was a beaten-down ticker at the time, could be a worthy investment for dividend hunters. I hope you were able to take... Read more

Dividend Aristocrats In The Cyclical Sectors