Regional Airlines Stocks That Can Make A Portfolio Fly

For income-seeking investors, higher-paying dividend stocks are historically considered to generate income and be less volatile. Dividends not only provide a steady stream of income, but they also justify the reasons one has originally invested in a company. Due to prolonged times of exceptionally low interest rates, several industries have been massively leveraged, including the travel industry.

Travel related stocks have been in high demand over the past months, not only because they consistently deliver gains, but also because their gains keep on getting stronger due to the decline in oil prices. In fact, travel demand soars when oil prices slide. In addition, US-based Travel, Hospitality, and Leisure companies are expected to continue looking for international growth opportunities, whereas airlines are expected to employ more asset-light partnerships like OneWorld, that enables passengers to fly on a foreign carrier by booking on a domestic one.
This article discusses three stocks trading in the Regional Airlines Industry. 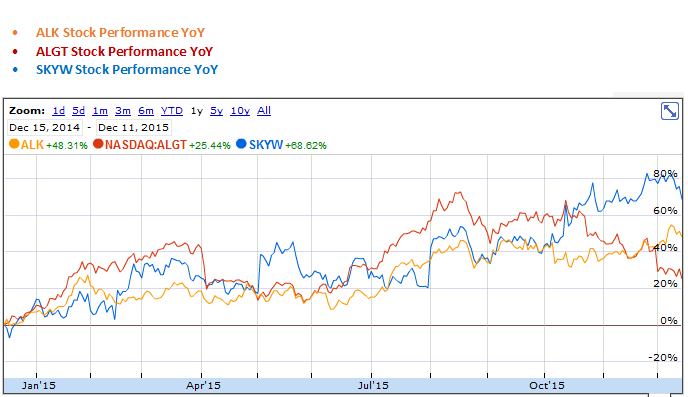 Strong Q3 2015 Results: The company’s decision to add non-stop service to the destinations it serves has proven a very effective strategy that has generated new revenue streams. At the same time, ALK’s cost profile continues to improve. Its non-fuel unit costs decreased 2%, while the industry’s costs have increased 1.4%, thus giving Alaska Air a sustainable advantage. Compared to Q3 2014, Alaska reported strong results in this quarter, as follows:


2016 Outlook: Alaska expects a 13% capacity in Q1 2016 and an overall market growth in all seven markets that it currently operates, planning to expand to another 11 markets in the Q4 2015. The company seeks to continue investing in its product and increase customer satisfaction (current score 86%, an all-time high) by creating a competitive advantage through award-winning customer service, and industry-leading operation. Analysts that follow Alaska Air estimate an average 5-year earnings growth of 16.5% and an average EPS of $6.85, up 11.3% from current EPS of $6.15.

Future Outlook: Allegiant will continue to support its operations through improving its systems and processes in order to achieve higher growth rates that do not exceed the capabilities of the company’s infrastructure. In addition, the company’s migration to an all Airbus fleet is expected to offer to Allegiant a competitive edge. Currently, the company operates 18 Airbus aircraft and will reach 25 by the end of 2015. The goal is to reach 50 Airbus aircraft over the next few years. Analyst consensus estimates an average earnings growth 29.6% for the next five years and an average EPS of $13.36, up 36.3% from current EPS of $9.80, through 2017.


SkyWest (Nasdaq: SKYW) is a Utah-based leading regional airline operating regular passenger and air freight services to the United States, Canada, Mexico, and the Caribbean. Through its subsidiaries, SkyWest operates its flights to 206 destinations across the Unites States and has partnerships with global leading carriers, including Alaska Airlines, American Airlines, Delta Air Lines and United Airlines. The company’s current fleet consists of 344 aircraft.

Q3 2015 Financial Highlights: SkyWest is widely recognized for its sustained operational and financial performance. Q3 2015 operating income reached $78.3 million, up 32.5% YoY from $59.08 million in the same quarter of 2014 as a result of effective operating leverage. Through the implementation of a fleet transition plan, SkyWest has altered its aircraft mix and added a new aircraft to its fleet, thus achieving strong operating efficiencies (operating expenses were down 7.7% YoY) and solid operating performance. The company has also improved its gross profit margin, 69% from 66%, in spite of the slight decrease of 4.9% YoY in revenues, $794 million from $834.6 in Q3 2014. Net income was down 12.3% YoY $36.27 million from $41.34 in Q3 2014. Its current annualized dividend is $0.16 per share, yielding 0.82% at a payout ratio of 17%.

FY 2016 Outlook: For 2016, SkyWest plans to continue improving its financial performance and profitability of its fleet through anticipated aircraft deliveries and fleet renewals. In terms of capital deployment, the company plans to deliver shareholder value through earnings growth and remains focused on effectively implementing its fleet strategy to sustain its strong operating performance and improve profitability. Analysts estimate an average EPS of $2.13 through 2017, up 121.5% from the current EPS of $0.96.