Consumer purchases of sporting goods in the U.S. have increased 28.7% in the period 2005 – 2015 ($50.35 billion to $64.8 billion) and 21% in the period 2010 – 2015 ($53.56 billion to $64.8 billion). Furthermore, in spite of the shorter holiday shopping season and the unusually warm weather, the sporting goods industry remained strong and healthy. Through promotions, discounts and differentiated products, the sporting goods retailers have delivered strong Q3 2015 results and remain a good pick for dividend investors.
This article discusses three sporting goods retailers with different market caps and differentiated products. Their average dividend yield is 2.4% (average yield of consumer goods 2.22%) and their average payout ratio is 36.2% (retail apparel industry 23.74%). All three companies consistently deliver strong results and high dividends. Furthermore, their average debt-to-equity ratio is 0.20, which suggests financially healthy companies with a manageable long-term debt. 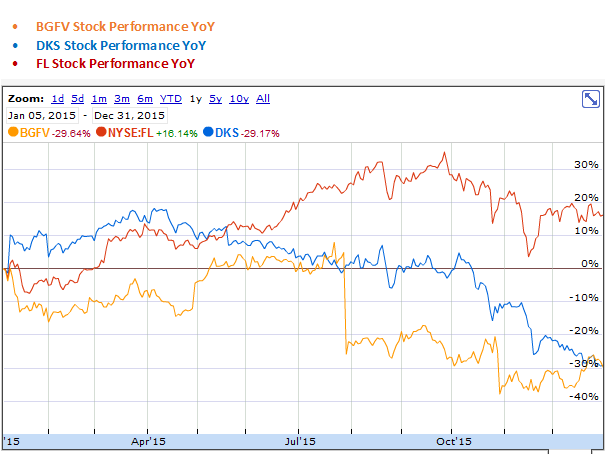 Future Outlook: 2015 marked Big 5’s 60 years in business. The company has evolved into a leading sporting goods retailer that delivers value to its shareholders. For the coming quarters and for 2016, Big’5 is expected to be well-positioned in the constantly changing retail industry and to use effective growth strategies to weather potential challenges. In addition, the company seeks for additional sources of growth and is ready to take over new initiatives that would drive sales and margins growth. Analysts that follow Big 5 estimate an average EPS of $0.74 through 2017 and an average earning growth rate of 13.3% annually through 2020.

Dick’s Sporting Goods (NYSE: DKS) is a Pennsylvania-based sports retailer that offers sports equipment, apparel, footwear and accessories to customers across the U.S. By being the only full-line sporting goods retailer with sustainable offline and e-commerce business, Dick’s is one of the leading sporting goods retailers in the United States. The company’s differentiated merchandising strategy seeks to provide its customers with a superior selection of goods. Dick’s operates 603 branded stores in 46 states, 78 Golf Galaxy stores in 29 states, 10 Field & Stream stores in five states and three True Runner stores in three states.

Q3 2015 Results: In the third quarter of 2015, Dick’s continued to leverage its strong relationships with its vendors, including Adidas, Nike and The North Face, aiming to deliver top quality merchandise to its customers, combined with an enhanced shopping experience. In spite of the record warm weather that has had a negative impact on the company’s sales and online traffic, Foot Locker has managed to support growth in athletic footwear and apparel categories, thus delivering strong results in Q3 2015. Specifically, revenues reached $1.64 billion, up 7.6% from $1.53 million in Q3 2014, leading to a slightly increased gross profit margin, 29.7% from 29.6%. On the downside, operating expenses increased 8.2% YoY to $1.57 billion from $1.45 billion, generating an operating income of $77.08 million, down 3.6% YoY from $79.93 million and a net income of $47.22 million, down 4% from $49.21 million in the same quarter last year. Finally, Dicks delivers an annualized dividend of $0.55 per share at a payout ratio of 18%, while the dividend growth since 2000 is 10% ($0.1375 from $0.125).

Future Outlook: Dick’s put a great emphasis on high-performance products aiming to meet its customer needs and minimize the product overlaps with its peers. The company’s differentiated product line is expected to generate higher gains in the coming quarters, mainly because online retailers and sellers have limited access to high-performance sporting goods. This is a need that Dick’s meets through its shop-in-store e-commerce platform. Analyst consensus estimates an average EPS of $3.57 through 2019, up 18% from current EPS of $3.02 and an average earnings growth of 11.6% per year through 2020.


Foot Locker (NYSE: FL) is a New-York based retailer that engages in the sale of athletic shoes and apparel. With 78 franchised stores in the Middle East (31), Germany (27) and the Republic of Korea (20), Foot Locker operates a huge network of 3,426 mall-based stores in the U.S., Canada, Australia, New Zealand and Europe. The company operates the Athletic Stores and Direct-to-Customers segments offering customers the Foot Locker brand as well as affiliates, including Eastbay, and the direct-to-customer subsidiary of Runners Point Group.

Q3 2015 Results: In the third quarter of 2015, Foot Locker has again demonstrated a record-setting growth mainly attributed to the diversity of its business. The company has built strength over multiple channels and, excluding the foreign currency fluctuations, it has delivered strong Q3 2015 results. Compared to Q3 2014, Foot Locker’s results are as follows:

Future Outlook: Foot Locker’s current debt-to-equity ratio is 0.05, suggesting an effective managing of its debt. The compass set a global footprint and has established an excellent momentum in all apparel. The management expects to maintain Foot Locker’s leadership in basketball, running, and classic sneakers, whereas analysts estimate an average EPS of $4.74 through 2018 (current EPS is $3.72) and an average annual earnings growth rate of 12.3% through 2020.

We are about to be at the end of April, yet my 1st quarter review is just ready to be released! What's with the hold up? Well, unfortunately I don't really have a good answer for that, but here we go! The 2018 Goals Before we head any further I wanted to review the goals that I set for the fund entering Q1 of 2018. All the goals are for the full year 2018. Hopefully this will give some insight into some of the moves that I made in Q1. Total Portfolio Value of $30,000 Gain of 10% for... Read more

Image credit Big 5 (BGFV) has been absolutely hammered in the past year or so. The stock raced to a new high at $19 toward the end of 2016 and since then, it has been bad news, bad news and more bad news for BGFV. Shares are back around $6 after guidance was lowered earlier this month. And while it is pretty obvious BGFV is having a hard time, it does seem very tempting to want to own it here given both the yield and the trough valuation. A double bottom may be forming The chart... Read more

Actionable Conclusions (1-10): Analysts Predicted Top Ten "Safer" Dividend Consumer Cyclical Dogs To Net 4.6% to 95% Gains By November 2018 Six of the ten top "safer" Consumer Cyclical dogs (tinted gray in the chart above) were verified as also being among the top ten yielders for the coming year based dog metrics. Thus the dog strategy for this group, as October, proved 60% accurate. Ten probable profit generating trades illustrated by YCharts analytics for 2018 were: Salem Media Group... Read more