Is There Any Energy Left In These Canadian Dividend Stocks?

The recent oil price collapse has had a great impact on the Canadian economy, even beyond the energy sector. Insurance companies and telecom firms confirm that the major concern of the energy sector is spreading. There are cases of companies that have achieved record profits in the previous years, yet now they experience a decline in their earnings, which inevitably leads to downsizing and the sharp cut of exploration investments.
Undoubtedly, companies that directly supply the oil, gas and mining industries have experienced the hardest hit. However, there are companies like the ones discussed in today’s article that have delivered strong results in the third quarter of 2015 and are expected to continue to deliver strong cash flows and shareholder value in the coming years. 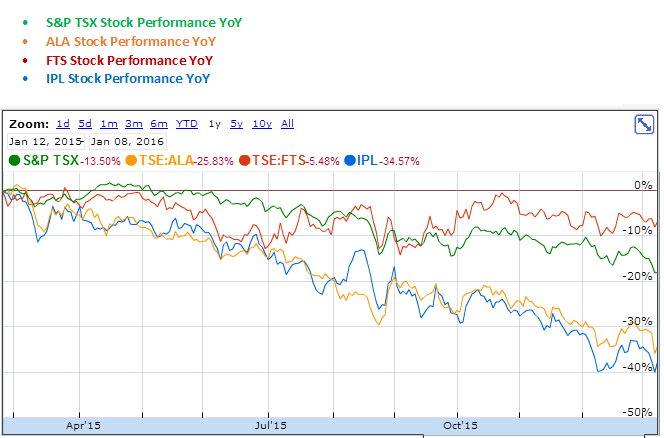 AltaGas (TSE: ALA) (OTC: ATGFF) is a Calgary-based company operating in the energy sector with a focus on natural gas, power, and regulated utilities. Through its Gas, Power, and Utilities segments, AltaGas provides its customers in North America and Asia with clean and affordable energy, including natural gas, power generation from gas-fired, coal-fired, wind, and biomass assets, along with regulated natural gas distribution utilities across North America and the United States.

Strong Q3 2015 Results: AltaGas has taken notable steps in delivering on its strategic plan. The company has completed the Northwest hydro facilities, has made significant progress in gas infrastructure to support energy exports and continues to generate steady growth in all utilities businesses. Revenues reached $452.2 million, up 1.8% YoY from $444.2 million in Q3 2014, while gross profit margin reached 30.2% from 45.7%. Operating expenses, down 4.8% YoY to $380.1 million from $393.4 million, generated an operating income of $72.1 million and a net income of 30.1 million, up 61.2% and 14.1 %, respectively, compared to the same quarter last year. The company’s debt-to-equity ratio of 0.77 suggests a financially healthy company.

Future Outlook: For Q4 2015: Weaker results in the gas business are expected to be offset by a higher EBITDA due to stronger business in the Northwest project. The company will continue to seek growth opportunities in the 2 billion range and has an already established pipeline of investment projects that is expected to create growth and long-term shareholder value in the coming quarters. For 2015 and 2016, revenues are estimated to $2.34 billion and $2.90 billion, respectively, whereas the net income is estimated at $145 million and $217 million, respectively.

Fortis (TSE: FTS) is a St. Johns-headquartered electric and gas utility company. Through its Regulated Electric & Gas Utilities segments, Fortis transmits, and distributes electricity in Arizona, while it serves more than three million residential, commercial, and industrial customers across Canada, the United States, and the Caribbean.

Strong Q3 2015 Results: In the third quarter of 2015, Fortis reported remarkable results mainly as a result of Fortis’ recent acquisitions in Arizona, a utility that keeps on improving quarter after quarter. Furthermore, the Arizona utility, as well as a cost-cutting policy, have offset certain losses in the Alberta business. In particular, compared to Q3 2014, Fortis’s Q3 2015 results were as follows:

Strong Q3 2015 Results: In the third quarter of 2015, Inter Pipeline delivered record financial results, following a pattern for the fifth consecutive quarter. In fact, the company has reached the highest operating income at $203.8 million and has delivered value from all its business segments.

Compared to Q3 2014, the results of Inter Pipeline in the third quarter of 2015 are as follows:


Dividend History & Outlook: Inter Pipeline delivers an annualized dividend of $1.48, which yields 6.99% at a payout ratio of 132.1%. As a result of the strong performance, the management has announced a 6% increase to the monthly cash dividend, which represents the 13th consecutive dividend increase of the company. Analysts expect an average DPS of $1.64, up 10.8% through 2017, whereas the dividend yield is expected to reach 7.01% and 7.51% in FY 2015 and FY 2016, respectively.