Crude oil tanker stocks can be a great way to boost the yield of an investment portfolio. Especially, for investors who like diversification, these investments are ideal to offer an additional income and trade off the losses incurred by other stocks. However, before selecting crude oil tanker stocks, investors need to be aware of how the oil tanker industry operates as well as the pros and cons of each company since the tanker business can be highly risky.
This article discusses three small caps that operate in the Crude Oil Tanker Industry. All three companies have an average dividend yield of 11.2%, which is above the industry average of 7.52%, and an average payout ratio of 144%, slightly lower than the industry average of 187%. Even more impressively, their average beta is 0.96 and their average debt-to-equity ratio is 1.02, suggesting financially healthy companies with effective debt management. Finally, they all trade well above their 52wk low and are expected to outperform the NYSE. 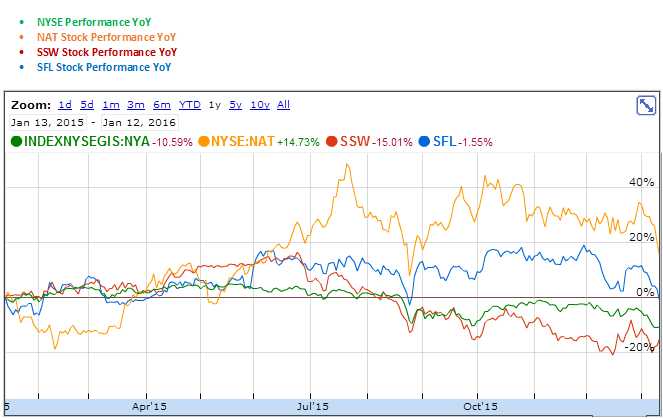 Dividend Strength: Nordic American Tankers delivers an annualized dividend of $1.52 or 11.4% dividend yield at a payout ratio of 163%. On January 13, the company has announced a cash dividend of $0.43 per share to shareholders to be paid on or about February 10, 2016. This is the 74th consecutive quarter that Nordic American Tankers delivers a strong dividend while its DPS growth is 12% since 2000.

Future Outlook: For the coming quarters of 2016 Nordic American Tankers is expected to be a key player in the tanker industry. The company has grown its fleet in 2015 without taking on new debt and its tested efficiency will be based on strong operational results, homogenous fleet, and great customer relationships. Analysts estimate an average EPS of $1.22 through 2017, up 30.8% from current the EPS of $0.93.

Seaspan (NYSE: SSW) is a Marshall Islands-headquartered independent charter owner and manager of container vessels in Hong Kong. The company’s fleet consists of 118 container vessels, out of which 19 are newly-built scheduled for delivery to the company and third parties through October 2016. Seaspan also provides limited ship management services to Dennis R. Washington’s personal vessel owning companies and ship management and construction supervision services to GCI, while its customer base includes COSCON, HL USA, Hapag-Lloyd, K-Line, MSC, and Maersk, among others.

Future Outlook: Seaspan’s core focus remains on the design, ownership and chartering of large, fuel-efficient container vessels that will allow the company to return shareholder value to its stockholders. Through diversification of capital structure, Seaspan has been consistently increasing its common share dividend demonstrating a DPS growth of 276% in the past six years. For the coming years, analysts expect an average EPS of $1.14, up 18% from the current EPS of $0.97 and an average earnings growth rate of 14% through 2020.

Dividend: In the third quarter of 2015, Ship Finance has increased its dividend to $0.45 per share, thereby delivering an annualized dividend of $1.80 or 12.3% dividend yield and 115% payout ratio. The company is delivering dividend for 47 consecutive quarters and has a DPS growth of 28.6% since 2004.

Looking Forward: Ship Finance has agreed to acquire several large containerships to be delivered in 2016 and 2017. Combined with the company’s divestment strategy to renew and diversify the fleet, Ship Finance is expected to dominate the current strong tanker market. Looking forward, the company has significant investment capacity available for new accretive investments. Analysts estimate an average EPS of $1.97, up 25.3% compared to the current EPS of $1.57.

Global infrastructure, a class of "real assets", has become more and more popular with investors who are seeking to enhance the resilience and diversification of their equity portfolio. Infrastructure assets, including utilities, oil and gas pipeline networks, communications and transportation infrastructure, provide important services to the broader society. These assets can provide stable and predictable cash flow that is buttressed by long-term contracts or regulation, as well as... Read more

Actionable Conclusions (1-5): Brokers Predicted 43.76% To 86.34% Net Gains From Top Five Basic Materials Sector Dogs By April 2020 Four of five top dividend-yielding MAT dogs were verified as being among the top ten gainers for the coming year based on analyst 1-year target prices. (They are tinted gray in the chart below.) So, our April 8 yield-based forecast for Materials dogs, as graded by Wall St. wizards, was 80% accurate. Projections based on estimated dividend... Read more

Actionable Conclusions (1-10): Analysts Forecast 18.84% To 38.37% Net Gains For Ten Russell 3000 Come November, 2019 Three of ten top Russell 3000 dividend stocks by yield were verified as being among the top ten gainers for the coming year based on analyst 1-year target prices. (They are tinted gray in the chart above). So, the yield-based forecast for Russell 3000 stocks as graded by Wall St. wizards was 30% accurate. Projections based on estimated dividend returns from $1000 invested in... Read more

Actionable Conclusions (1-10): Brokers Calculate 32.25% To 103.3% Net Gains For Ten 10%+ Yield Stocks By Mid-October 2019 Five of ten top 10%+ Yield WallStars were among the top ten gainers for the coming year (based on analyst 1-year targets). So, this forecast for 10%+ Yields, as graded by Wall St. Brokers, was 50% accurate. Projections based on dividends from $1000 invested in the highest yielding stocks and aggregate one-year analyst median target prices of those stocks, as reported by... Read more

Actionable Conclusions (1-10): Brokers Guesstimated Top Ten 10%+ ‘Safer’ Dividend WallStars To Net 17% To 94% By Mid-September 2019 Six of the ten top 10%+‘Safer’ Dividend WallStars by yield (shaded in the chart above) were verified as being among the top ten gainers for the coming year based on analyst 1-year target prices. Thus, the yield strategy for this group, as graded by analyst estimates for this month, proved 60% accurate. Projections based on dividends from $1000... Read more