A Glance at the World's Coffee Industry Dividends

This summer is starting to look pretty hot for the key coffee industry players. Industry acquisitions and spin-offs are creating new pure-plays in the coffee sector. Single-serve coffee market is booming and new entrants in this market segment are intensifying competition that is likely to squeeze margins of the key market players. Increased competition that is promising to take over market share has caused a precipitous drop in the value of the shares of some steaming coffee plays, such as Green Mountain Coffee Roasters (Nasdaq: GMCR).

As regards industry acquisitions and spin-offs, Sara Lee Corp. (NYSE: SLE), a diversified foods company, has completed a sale of the majority of its North American foodservice coffee operations to The J.M. Smucker Company (NYSE: SJM). “The two companies have entered into a licensing and support agreement to cooperatively develop liquid coffee technologies to drive long-term growth,” according to a statement from Sara Lee Corp.

In a separate action, Sara Lee Corp. is also spinning off its international coffee and tea business (“CoffeeCo”) and merging it with D.E. Master Blenders 1753, creating a pure-play coffee and tea company listed on the NYSE Euronext in Amsterdam. The company's shareholders (of record as of the close of business on June 14, 2012) will receive the CoffeeCo common stock after market close on June 28, 2012. They will also immediately receive a $3.00 per share special dividend. (Following the spin-off of the CoffeeCo, the company will implement a 1-for-5 reverse stock split.) After the distribution of the special dividend, CoffeeCo will merge with D.E Master Blenders 1753 N.V., and shareholders of Sara Lee Corp. will end up with one share of DE Master Blenders 1753 for every share of Sara Lee's stock owned. Sara Lee Corp., the parent company, will focus on the meat business and will change its name to Hillshire Brands Company (NYSE: HSH). 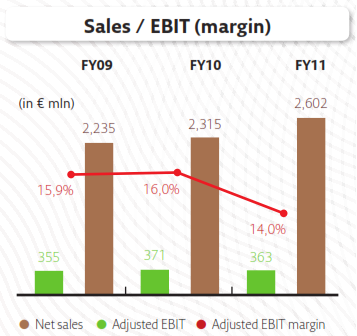 D.E. Master Blenders 1753 is a coffee and tea company that offers a broad range of high quality products in Europe, Brazil, Australia, and Thailand. The company sells its products in 18 countries and has a global distributor network in 52 countries. According to the company, it holds a top market position in the coffee markets of the Netherlands, Belgium, Denmark, Hungary, and Brazil, while it is ranked the second in France and Australia. The company is currently the third largest coffee distributor in the world. D.E. Master Blenders 1753 realizes 65% of its sales in Western Europe and 21% of sales in South America. According to NYSE Euronext, the company's product offering includes multi-serve coffee products (49%), with brands such as Douwe Egberts, L'OR, Maison du Café, Marcilla, Merrild, Damasco, and Moka; single-serve coffee products (19%), including a Senseo brand; liquid roast coffee products (10%), including Cafitesse; instant coffee (10%), including brands of Moccona and Douwe Egberts; tea (6%), with brands of Pickwick and Hornimans; and other (6%), consisting primarily of coffee brewers.

The already-noted sale of Sara Lee's North American coffee operations to The J.M. Smucker Co. has strengthened the coffee portfolio of the U.S.-based diversified packaged food company. The J.M. Smucker Co. distributes coffee products under the brand names of Folgers, Dunkin' Donuts, Millstone, and Cafe Bustelo. The company acquired Folgers and Millstone brands from Procter & Gamble in June 2008. The J.M. Smucker Company is currently an $8.5 billion company that pays a dividend yield of 2.5% on a payout ratio of 47%. The company has been raising its dividend at an average rate of 11% a year over the past five years. 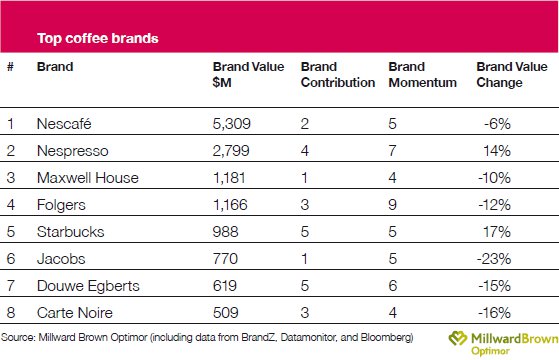 Kraft Foods is one of the leading coffee distributors in the world and “the number one coffee company in Europe.” Its Carte Noire is the leading premium coffee brand in France; in Germany, Jacobs is the top selling brand; in Sweden, Gevalia is the most popular brand; while in the UK, Kenco brand has found its large customer base. The company also sells Grand Mère, Café Hag, Mastro Lorenzo, and other brands. Its Maxwell House Ground Coffee brand is ranked number 7 among the U.S. coffee brands. Kraft Foods is a diversified packaged foods company and the world's second largest food distributor. It is a $69 billion business that pays a dividend yielding 3.0% on a payout ratio of 58%.

Starbucks is the largest coffeehouse company in the world, with nearly 17,000 retail stores in 55 countries. The company has market capitalization of $39.6 billion, and sells more than 30 blends and single?origin premium arabica coffees. Its popular brands include Starbucks Coffee, Seattle's Best Coffee, and Torrefazione Italia Coffee. The company pays a dividend yield of 1.3% on a payout ratio of 39%. The company has seen a spectacular growth in recent years and its stock price reflects that. Many prominent investors are bullish about the company because of its potential to grow through expansion in the emerging markets, especially in China.

Green Mountain Coffee Roasters is a $3 billion business engaged in the manufacturing and sale of specialty coffee and coffee makers. “It sells some 200 varieties of coffee, cocoa, teas, and other beverages in K-Cup portion packs and coffee in traditional packaging.” Its primary market is North America. The company sells Green Mountain Coffee, Tully's Coffee, Diedrich Coffee, Coffee People and Timothy's World Coffee brands as well as the Keurig Single Cup Brewing System. Green Mountain has licensing deals with premium brands like Starbucks, Folgers/The J.M. Smucker Company, and Dunkin' Donuts (Nasdaq: DNKN). Green Mountain Coffee Roasters has seen substantial growth in recent years, with its earnings per share (EPS) expanding at an average rate of 75.4% a year over the past five years. This growth had been reflected in the company's stock, which surged through September 2011. Since, the stock has fallen off the cliff, especially following a short sale recommendation by billionaire David Einhorn, who precipitated the stock's plunge.

Along with the fast growth rate, competition in the single-serve coffee market has been brewing. Nestle dominates the single-serve coffee market with 35% share, while D.E Master Blenders 1753 has 9% share through its L'Or Espresso product. Increasing competition has been especially deleterious for companies like Green Mountain Coffee Roasters. The company currently controls 75% of the U.S. single-serve coffee market and 8% share in the global market. However, even before the expiration of its patents, Green Mountain Coffee Roasters has seen a rising competition from the established coffee companies, such as Nestle and Kraft, and supermarket chains. For instance, recently, the U.S. supermarket chain Safeway (NYSE: SWY) began selling, at a discount to Green Mountain's K-Cups, its own brand of filtered coffee pods that are compatible with Green Mountain's Keurig brewers. Kroger Co. (NYSE: KR), the largest U.S. grocer, also plans to sell its own single-serve coffee cups compatible with Keurig brewers. Starbucks has just started selling single-serve K-Cup coffee pods for Keurig brewers. Starbucks will also launch its own single-cup coffee brewer later this year. These developments will lead to margin deterioration and market share contraction for Green Mountains Coffee Roasters.

The coffee market has plenty of participants that boast a potential for growth in the future. Investors should focus on those companies that have the capacity to grow earnings per share and dividends amid fiercer competition.

17 Dividend Stocks With Both EPS And Sales Growth On Fire

What could be the best scenario for a dividend investor? When I think about dividend investing, I think about the possibility of receiving a dividend payout forever. After all, the “perfect dividend stock” is paying a distribution quarterly and show the possibility of increasing this payment year after year. I went on doing some research based on a few data inspiring sustainable dividend over time. Which Ratios Lead to Safe Dividend Payouts? From a stock screener, I’ve pulled out the... Read more

I have searched for very profitable companies with very strong growth prospects that pay rich dividends. Those stocks would have to show also a very low forward P/E. I have elaborated a screening method which shows stock candidates following these lines. Nonetheless, the screening method should only serve as a basis for further research. The screen's formula requires all stocks to comply with all following demands: Dividend yield is greater than 3.0%. The PEG Ratio is less than 1.25. ... Read more