Over the last decade, the broadcasting industry has seen a range of technological advancements in its television, radio, and digital services. Consolidation of individual broadcast stations into large networks as a result of loose ownership regulations has increased the industry competitiveness. The trend is expected to continue as there are low barriers to entry, thereby consolidating the industry. Major companies own and operate multiple stations nationwide by implementing cost cutting strategies through economies of scale and consolidation that limits employment growth.
This article discusses three media companies operating in the Broadcasting industry. All three companies trade significantly above their 52 week-low, suggesting an upward performance trend. Entravision, the small-cap, has the lowest debt-to-equity ratio, however, both large caps, Nexstar and Sinclair are focusing on strategic acquisitions for free cash flow growth. All three companies are relatively risky with an average beta of 2.08, however, they all deliver shareholder value with consistent dividend payments and an average payout ratio of 34%. 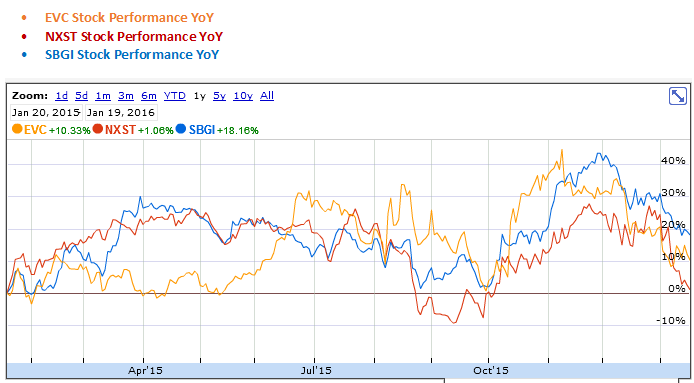 Entravision Communications Corporation (NYSE: EVC) is a California-based diversified media company that operates a mix of television, radio, and digital media properties to reach Hispanic consumers in the United States and the border markets of Mexico. Through its Television Broadcasting, Radio Broadcasting, and Digital Media segments, Entravision owns and operates 58 primary television stations and 49 operational radio stations across the U.S. as well as proprietary technology and data platform that delivers digital advertising solutions in various advertising formats.

Q3 2015 Financial Highlights: In the third quarter of 2015, Entravision demonstrated a sustained strong performance in the Audio segment, improved results in the Television segment and further expansion of its digital revenues. The company’s growth strategy delivered strong results primarily due to industry leading content offerings that aim to transform Entravision into a leading multi-platform media company.
Compared to Q3 2014 results, third quarter results were as follows:

New Agreement: On top of strong Q3 results, Entravision has announced an agreement with Erazno y La Chokolata (Alex Lucas and Oswaldo Diaz) for an extension of the contract up to December 31, 2019. The agreement effectively locks up all three of Entravision’s top audio acts for the coming years in the top 150 U.S. Latino markets with a full coverage of over 5 million listeners weekly through mobile and social media.

Focus on Digital Growth: Mobile remains a key strategic area for Entravision as it is the company’s fastest-growing revenue stream accounting for 23% of total digital revenues, compared to digital video offerings, which account for 28% of total digital revenues. Entravision’s digital team is developing new mobile apps that relate to popular personas such as Erazno or Alex El Genio Lucas to attract a broader number of consumers and drive additional audience engagement via streaming audio, social media integration, and unique mobile content.

Future Outlook: In the third quarter Entravision has executed a sustained content-driven strategy, which is expected to deliver strong operating results in the coming quarters as well. Through the expansion of its digital revenues, Entravision expects to surpass the 14,000 local stories and videos published in Q3 2015 as well as the 4.7 million hours of streaming audio to more than 1.8 million unique listeners. Analysts estimate an EPS of $0.33, up 13.8% from current EPS of $0.29 through 2018.

Shareholder Value: Nexstar focuses on building shareholder value through strong free cash flows and cost management strategies. The company’s growing free cash flows allow further financial flexibility to continue pursuing additional accretive acquisitions. In doing so, Nexstar leverages its debt – current debt-to-equity ratio is 9.24 – and returns capital to shareholders through share repurchases. Nexstar delivers an annualized dividend of $0.76, yielding 1.59% at a payout ratio of 30%, slightly below the average Broadcasting Media & Cable TV Industry payout ratio of 41.93%. Since August 2015, Nexstar has repurchased approximately 1 million shares at an average price of $48.15 per share, while the company’s DPS growth in the period 2013 – 2015 is 58.3% ($0.19 from $0.12 on a quarterly basis).

Growth Strategy: Nexstar is a growth-oriented company with long-term prospects. From 2006 through 2014, the company’s free cash flow has grown at a compound annual growth rate of approximately 25% per annum. This highlights that, focus on long-term acquisition strategies and operating discipline combined with effective capital structure, lead to sustained long-term growth. Approximately $467 million of pro forma free cash flow are expected out of this growth strategy for the period 2015-2016.

Future Outlook: Nexstar expects the completion of the North Dakota transaction and a relative increase of market share in political advertising in its markets. Both these areas will help the company to meet or exceed its free cash flow targets while waiting for the completion of the Media General acquisition. Due to this outstanding offer to Media General, Nexstar is not expected to make any additional share repurchases in the mid-term. Analysts estimate an average earnings growth of 11.5% per annum through 2020 and an average EPS of $3.84 (current EPS is $2.53).


Sinclair Broadcast Group (NYSE: SBGI) is a Maryland-based diversified television broadcasting company that focuses on the ownership and operation of free over-the-air programs and the provision of sales services to 164 television stations across the United States. In addition, Sinclair invests in a range of real estate ventures as well as in private equity and structured debt/mezzanine financing investment funds.

Q3 2015 Financial Highlights: In the third quarter of 2015, Sinclair has expanded news in nine markets and has launched Connect to Congress initiative to connect the members of Congress with the Sinclair viewers on a regular basis. In addition, the company has launched the Full Measure Sunday Show with Sharyl Attkisson and has also adopted the Next Generation Broadcast Platform, the ATSC 3.0, that will allow Sinclair to broadcast with a more robust and efficient way.
Compared to Q3 2014, the Q3 2015 results were as follows:


Future Outlook: On October 31, Sinclair launched COMET, the first 24/7 science fiction multi-channel network with more than 1500 hours of premium MGM content in over 60% of the countries reaching over 65 million homes. In addition, the company rolled out its proprietary digital content and video management system, thereby breaking the news faster on mobile devices. In the near future, it is expected that through accretive acquisitions, Sinclair will leverage its debt – current debt-to-equity ratio is 8.01 – to deliver shareholder value. Analysts estimate an average EPS of $2.60 through 2018, up 19.6% and an average earnings growth of 2.0% per annum through 2020.

Actionable Conclusions (1-10): Analysts Estimated 25% To 93% Net Gains For Top Ten WallStars By November 2019 Three of ten WallStars, based on analyst 1-year target prices, were also placed on the top ten dividend-yielding list for the coming year (as tinted in the chart above). Thus, the yield-based forecast for the Consumer Cyclical dogs as graded by Wall St. wizards was 30% accurate. The following probable profit-generating trades were selected by estimated dividend returns from $1000... Read more