Many investors choose dividend-paying stocks to capitalize on steady payments as well as to the opportunity to reinvest the dividends to purchase additional shares. Many dividend-paying stocks represent financially healthy companies, which in turn, entice investors to invest in them. As a result, the stock prices of these companies increase and investors are compensated with sustained dividend payments. Furthermore, a financially stable company is more likely to increase its dividend over time.
In majority, dividend-paying stocks are less volatile and therefore appealing to more investors. Those investors invest in these stocks, thus raising the stock prices and dividend payments.
This article discusses three companies that trade in the cable media industry. All three companies have strong fundamentals, in spite of the foreign currency headwinds, and deliver strong operational results in their field. Their average beta of 1.07 and their average debt-to-equity ratio of 1.56 suggest low risk, financially healthy companies and therefore ideal picks for value investors. 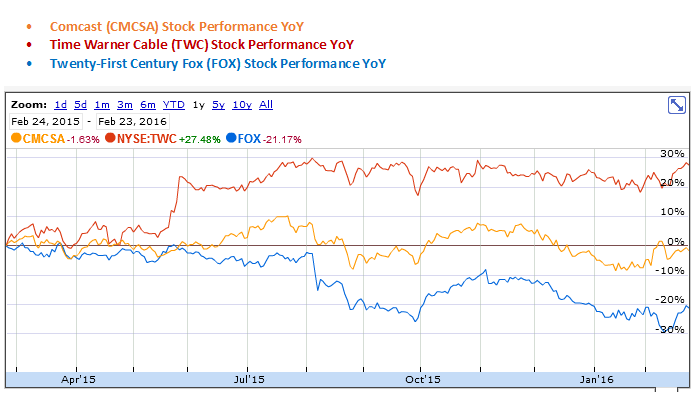 Dividend Growth & History: In FY 2015, Comcast has repurchased $6.75 billion in common shares and has made $2.4 billion cash dividend payments, totaling a $9.2 billion return of capital to shareholders for the year. Furthermore, the 2016 Total Return of Capital program includes a 10% annualized dividend increase to $1.10 per share and an increased share repurchase program authorization to $10 billion, out of which $5 billion are planned to be repurchased in 2016. Comcast’s dividend growth for the period 1990-2015 is 818.3% or 32.7% annually.

Future Outlook: Entering 2016, Comcast is expected to continue delivering strong results. Possessing a portfolio of assets that make up for one of the leading media and technology companies worldwide, Comcast will continue investing in new opportunities, including a potential expansion of the business theme park in Japan and China, or an extension of business in the Enterprise market. Analysts that follow Comcast estimate an average earnings growth of 11.13% per year through 2020 and an average EPS of $4.19 for the next four years, up 29.2% from current EPS of $3.24.


Future Outlook: In the fourth quarter of 2015, Time Warner has invested aggressively to drive subscriber growth, expand its customer base, and improve the customer experience. This strategy has led to an increase in sales and marketing where the company has increased spending by $79 million or 14.7% in support of higher volumes of connects. For the future, it is expected that Time Warner will continue setting ambitious targets for network reliability, and first call resolution and will be keen to enhance its product line to drive business growth. Analyst consensus estimates an average EPS of $9.16 through 2020, up 42.2% compared to current EPS of $6.44, and an average earnings growth of 7.32% annually for the next five years.

Q2 2016 Results: In the second quarter of 2016, Twenty-First Century Fox has continued to drive growth through its cable business, delivering sustained gains in advertising revenue, emphasizing the power of its global brands and distinctive programming. In spite of the foreign currency headwinds, the company has managed to deliver strong Q2 2016 results and be recognized as a leader in creating unique and compelling creative content with eight Golden Globe Awards and 30 Oscar Academy Awards nominations, double its nearest competitor.

Future Outlook: Twenty-First Century Fox is expected to continue playing a leading role in the industry. Analysts estimate an average EPS of $2.05, up 69% from current EPS of $1.21 through 2020 and an average earnings growth of 18.62% per year through 2020.

Comcast Corporation (NASDAQ: CMCSA) announced that its Board of Directors declared a quarterly dividend of $0.25 a share on the company’s common stock. The quarterly dividend is payable on January 26, 2022 to shareholders of record as of the close of business on January 5, 2022.... Read more

Comcast Corporation (NASDAQ: CMCSA) announced that its Board of Directors declared a quarterly dividend of $0.25 a share on the company’s common stock. The quarterly dividend is payable on October 27, 2021 to shareholders of record as of the close of business on October 6, 2021.... Read more

Comcast Corporation (NASDAQ: CMCSA) announced that its Board of Directors declared a quarterly dividend of $0.25 a share on the company’s common stock. The quarterly dividend is payable on July 28, 2021 to shareholders of record as of the close of business on July 7, 2021.... Read more

Comcast Corporation (NASDAQ: CMCSA) announced today that it increased its dividend by $0.08 to $1.00 per share on an annualized basis, up 9% year-over-year. In accordance with the increase, the Board of Directors declared a quarterly cash dividend of $0.25 a share on the company’s common stock, payable on April 28, 2021 to shareholders of record as of the close of business on April 7, 2021.... Read more