The beverages industry has proven mostly recession-resilient, thriving even when cyclical sectors face major growth headwinds. Currently, the overall sector is expanding at a steady rate, with some segments of the industry, such as carbonated drinks, becoming mature industry sectors, while others, such as sports and health drinks as well as premium spirits, finding growth opportunities around the globe. In the coming years, the industry focus and growth will shift toward emerging markets, where improvements in the populations' spending power and the trend of Westernization will drive a strong demand. Premium brands stand to benefit from this evolving trend.

MarketLine, an information firm, forecasts that the world's beverage market will grow at a low average rate of 2% a year between 2010 and 2015, hitting $1.9 trillion. The global market for non-alcoholic beverages is forecast to expand at a slightly higher average annual rate of 3% through 2015, reaching $586 billion. On the other hand, the alcoholic beverages sector is also set to grow at low single-digit rates, with the global spirits sales forecast to rise 17% in total between 2010 and 2015, to $306 billion.

Growth in the non-alcoholic drinks market is driven by the increases in per capita consumption of sports and health drinks, juices, flavored water, and ice tea. At the same time, sales of carbonated drinks are stagnating, while sales of bottled water are on the decline. While North America is now the largest soft drinks market, Asia Pacific region is positioned for the most significant growth. In the overall soft drinks category, growth is expected to shift from the emerging markets of Brazil, Russia, Indiaand China to Mexico, Indonesia, Venezuela, the Philippines, Argentina, Colombia and Thailand. In the alcoholic drinks segment, beer and wine will be the key drivers of growth. Above-average growth in the sales of alcoholic beverages will be achieved in the Asia Pacific, Middle East and Africa regions. As regards the wine subsector, focus is shifting from “Old World producers such as France and Italy towards New World producers in Australia, South Africa and the Americas,” according to Economist Intelligence Unit. 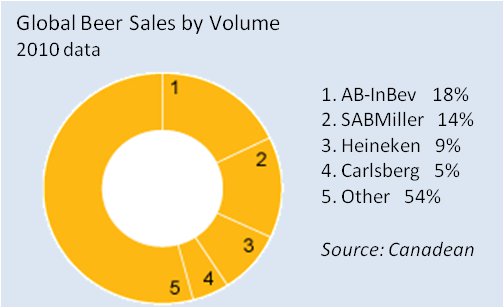 A Glance at Industry Players

Given this broad overview of the beverages industry, here is a quick glance at the key players in the industry. Most of them pay attractive dividends and boast favorable risk-return profiles.

Coca-Cola Company has a market capitalization of $169 billion. The company is the world's largest soft drinks manufacturer. It pays a dividend yield of 2.7% on a payout ratio of 54%. The Wall Street analysts' consensus forecast is for Coca-Cola's earnings per share (EPS) to grow at an 8.2% average annual rate for the next five years. The company has delivered strong growth because of market share expansion in developing countries and strong pricing in North America. The country is seeing especially strong growth in India, China, Thailand and South Africa.

PepsiCo Inc. is a soft drinks giant that ranks the second-largest player in the sector. It has a market capitalization of $107 billion. PepsiCo pays a dividend yield of 3.1% on a payout ratio of 53%. The company is expected to boost its EPS at a 6.3% per year for the next five years. The company has also positioned itself well in the emerging markets and has benefited from solid pricing power in its core developed markets.

Dr Pepper Snapple Group, Inc. (NYSE: DPS): is a $9 billion U.S. maker of soft drinks, including Dr Pepper, Crush, Sunkist soda, Schweppes, 7UP, A&W, and others. The company pays a dividend yield of 3.2% on a payout ratio of 50%. The company's EPS is forecast to grow 6.5% per year over the next five years, on par with the average annual growth rate realized over the past five years.

Nestle SA (VTX: NESN) is a diversified consumer goods company and the world's largest bottled-water producer. It has seen its sales of bottled water languish amid criticism that bottled water in plastic containers is contributing to the environmental pollution. Still, the long-term demand prospects for fresh bottled water are bright, given the looming global shortages. Nestle pays a dividend in Swiss francs, with a yield of 3.5%.

Anheuser-Busch InBev is the world's largest beer maker. It sells more than 200 different brands in the world, including Budweiser, Stella Artois, Beck's, and Leffe. The company's global sales volumes increased 3% in 2011, with slightly stronger growth than the overall average for its flagship brands. Latin American sales have been robust. Analysts forecast that the company will sustain strong EPS growth in the future, with EPS growing at 14% per year for the next five years. AB InBev pays a dividend yield of 1.9% on a payout ratio of 32%.

SABMiller PLC is the world's second biggest maker of beer. The company has more than 200 beer brands in 75 countries. Some of its most popular brands include Grolsch, Miller Genuine Draft, Peroni Nastro Azzurro, and Pilsner Urquell. The company pays a dividend yield of 2.35%. The company stands to benefit especially from higher demand in Africa amid rising standards of living on the continent.

Heineken NV is the world's third largest beer maker in the world. The company sells some 250 different beer brands in 178 countries. Its most popular beer brands include Heineken and Amstel. Heineken pays a dividend yield of 2.13%. Analysts expect dividends to increase 7.11%, on average, in the upcoming fiscal year.

Carlsberg (CPH: CARL-B) (OTC: CABGY) is the fourth largest beer maker in the world. The company sells its brands in 140 countries around the world. Carlsberg's popular brands include Carlsberg Beer and Tuborg. The company is the leading beer seller in Russia with about 40% market share. It also operates breweries and joint ventures in China and India. The company pays a dividend yield of 1.23%.

Molson Coors Brewing Company (NYSE: TAP) is a $7 billion North American beer producer. The company's popular brands include Coors Light, Miller Lite, Coors Banquet, Molson Canadian, Molson Export, Molson Dry, and others. The company also brews or distributes products under the Heineken, Amstel Light, Miller Lite and other brands. Molson Coors pays a dividend yield of 3.3% on a payout ratio of 35%. Analysts forecast that the company will boost its EPS at an average rate of 9% per year for the next five years.

Diageo (NYSE: DEO) (LSE: DGE) is a $62 billion spirits, wine, and beer maker. The company's popular brands include Smirnoff vodka, Johnnie Walker, Baileys Original Irish Cream liqueur, Captain Morgan rum, JeB scotch whisky, Tanqueray gin and Guinness stout. The company is expected to boost its EPS at an average annual rate of 10.4% for the next five years. Diageo pays a dividend yield of 2.1% on a payout ratio of 51%.

Pernod-Ricard SA (PAR: RI) is a France-based maker of spirits and wines. Its popular brands include ABSOLUT, Ricard, Havana Club, Ballantine's, Malibu, The Glenlivet, Chivas Regal, and others. The company pays a dividend yield of 1.8%.

Beam Inc. (Nasdaq: BEAM) is a $10 billion producer and distributor of spirits. The company produces bourbon whiskey, Scotch whisky, Canadian whisky, tequila, cognac, rum, cordials, and ready-to-drink pre-mixed cocktails under the Jim Beam, Courvoisier, Canadian Club, Teacher's, Laphroaig, Knob Creek, and others. Wall Street analysts forecast that the company's EPS will grow at an average annual rate of 11% for the next five years. Beam Inc. pays a dividend yield of 1.3% on a payout ratio of 14%.

Canadian Dividend All-Stars are companies that have raised dividends for at least five consecutive years.Laurentian Bank became the latest All-Star to cut the dividend.Only one All-Star, Andrew Peller, is expected to raise dividends this week.We are in the tail end of the most recent earnings season, and dividend growth has been virtually non-existent - at least here in Canada. Since the last update, Canada's banks reported earnings. Typically, it would have resulted in dividend... Read more

Anheuser-Busch's Dividend Gets Decimated: What Investors Need To Know

Anheuser-Busch has cut its dividend once more.The beer industry has a favorable long-term outlook and is resilient during recessions.Shares are inexpensive, and investors could see ample share price gains in the long run.Article Thesis Anheuser-Busch InBev (BUD), one of the largest beer companies in the world, just announced that it would cut its dividend in half. For income investors that rely on the dividends that will be a hit, but it makes sense for the company to cut its... Read more

5 Dividend Stocks To Buy The Week Of February 24th

Will your wealth be halved in the next recession? Mine almost certainly won't. I'll tell you why.The key involves how one defines "wealth." I define it not as the paper value of my assets but rather the income generated from them.This week's 5 dividend stock picks include a two-for-one cruise line deal, a recession-resistant adult beverage producer, an iconic industrial conglomerate, a midstream nat gas giant, and a transforming biopharma stalwart.Lastly, I... Read more

The Rose Portfolio I, Rose, a retired-in-2010 pharmacist, am real, and so is my name and the portfolio. It consists of 3 brokerage accounts, 2 Roth and 1 taxable, along with 6 companies combined together, and “managed” by me for us. The "us" includes my husband of 49 years, who enjoys having me do the managing. It is old in some regards and not so much in others, as it was and still is being arranged from ETFs and IRAs to Roths and individual stocks. I still put new dividend money to work,... Read more