Are These Small Caps With High Dividends A Safe Bet?

Small caps with high dividend yields can be a win-win situation for value investors, because they receive a decent dividend without compromising growth. In fact, small caps with high dividends offer the potential for long-term gains and income in the form of a dividend.
Furthermore, small caps have historically outperformed large caps, because small caps have a greater potential for growth. Also, dividend stocks that have been outperformers over the long term, also tend to provide a cushion against price volatility and economic uncertainty. Investing in small caps with high dividend yields can be a safe choice in a fluctuating market environment.
This article discusses three small cap stocks that trade in different industries, with a market capitalization of less than $1 billion and an average dividend yield of 27%. Although all three stocks have underperformed the market YoY, they have strong fundamentals and they consistently deliver strong dividends. 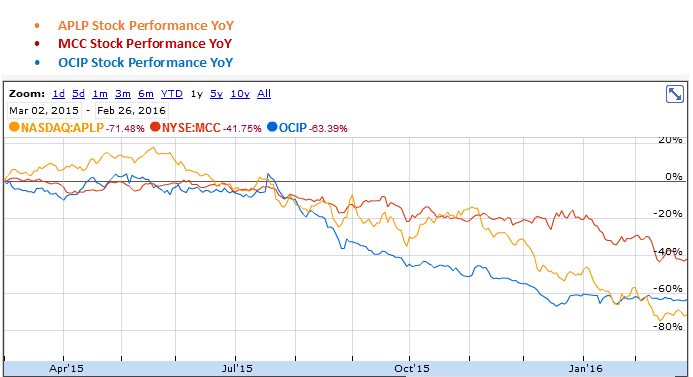 Archrock Partners LP (Nasdaq: APLP) is a Houston, Texas-based Master Limited Partnership (MLP) that engages in the designing, sourcing, owning, installing, operating, servicing, repairing and maintaining equipment to provide natural gas contracts to customers across the United States. Through its subsidiaries, Archrock Partners monitors compression services requirements over time to provide the necessary modifications to the level of services and related equipment. The company serves a network consisting of a range of companies operating in the oil and natural gas industry, including natural gas producers, processors, gatherers, transporters, and storage providers.

FY 2015 Results: Compared to 2014, Archrock Partners has delivered strong results in 2015. Revenues reached $656.8 million, up 13.1% YoY from $518.0 million, whereas operating income was $315.0 million, up 26.5% YoY from $249.0 million and net income reached $83.0 million, up 71.1% YoY from $48.5 million in the same period last year. Moreover, in 2015, excluded items include a non-cash goodwill deficiency of $127.8 million, a non-cash long-lived asset deficiencies of $39.0 million, and acquisition costs of $0.3 million. Also, in the fourth quarter, Archrock Partners continued to demonstrate an established stability of production-related services in spite of the challenging market environment.

Future Outlook: Going forward, Archrock Partners is expected to be highly focused on cost efficiency policies and on working closely with its customers to achieve strong operating results. Through 2018, analyst consensus estimates the following metrics for Archrock Partners:

Q1 2016 Results: Medley Capital delivered mixed results in the first quarter of 2016 with lower operating expenses, but also significantly higher losses. On the upside, the company has initiated a share repurchase program, which has delivered $2.5 million to shareholders as a result of repurchasing 143,000 shares at a weight average price of $7.68 per share in the fourth quarter of 2015. Furthermore, the company’s dividend growth for the period 2011-2015 is 87.5% or 21.9% annually. More specifically, compared to Q1 2015 results, Medley’s Q1 2016 results are as follows:


Future Outlook: Despite the fluctuating financial environment, Medley Capital continues to see opportunities in the market, that could bring a beneficial outcome to the company’s shareholders. Furthermore, the company is committed to the share repurchase program in order to boost shareholder value through stronger dividends. Through 2018, analysts estimate an average EPS of $1.8, up 521% from the current EPS of $0.19 and an average earnings growth rate of 5% annually through 2020.


OCI Partners LP (NYSE: OCIP) is a Texas-based company that engages in the production and sale of ammonia and methanol across the United States. The company’s network consists of industrial users and commercial traders who use methanol and ammonia for further processing and distribution.

Future Outlook: The low natural gas pricing environment and the ample supply of methanol in the market both have helped OCI Partners to offset declines in its realized ammonia and methanol prices and to set the grounds for future growth. Moreover, the new supply of methanol coming from new methanol production facilities in Venezuela, Egypt, and Trinidad, have supported the company’s pricing strategy both for this and for the coming quarters. Analysts estimate an average EPS of $0.98 per share through 2018, up 20.4% from the current EPS of $0.81.

At the end of every month I publish a Cash Flow Kingdom 'CFK' Synopsis article which reviews the month, current Best Opportunities (includes both growth and income), updates the CFK Income Portfolio and takes care of some housekeeping chores (upcoming calendar, YTD realized gains and losses disclosure, etc.). Normally this Synopsis article is not released to the public. However, with CFK members' acquiescence, a suitable delay, and a few edits, I thought I'd do this one time. If it's well... Read more

Actionable Conclusions (1-10): Brokers Projected 30.59% To 55.63% Net Gains Boosting Ten Top Energy Stocks To February 2019 Five of ten top-gaining Energy sector stocks, based on analyst 1-year target prices, were also part of the top ten dividend-yielders for the coming year (as tinted in the chart above). Thus, the yield-based forecast for the Energy sector, as graded by the Wall St. wizards, was 50% accurate. The following probable profit-generating trades were flagged by estimated... Read more

Actionable Conclusions (1-10): Brokers See 32% To 57.36% Net Gains Boosting Ten Top Energy Stocks By December 2018Five of ten top gaining Energy sector stocks, based on analyst 1-year target prices, were also part of the top ten dividend-yielders for the coming year (as tinted in the chart above). Thus, the yield-based forecast for the Energy sector, as graded by the Wall St. wizards, was 50% accurate. Ten allegedly bountiful profit-generating trades revealed in YCharts for December 2018... Read more

Actionable Conclusions (1-10): Brokers Estimate 53.3% To 123.65% Net Gains For Ten Wall St. Favored Stocks By Yield To December 2018 Four of ten top Wall St. Favorites by yield were among the top ten gainers for the coming year based on analyst 1-year target prices. (They are tinted gray in the chart listing below). So, the yield-based forecast for Wall St. Target Favorites, as graded by Wall St., was 40% accurate. Ten probable profit-generating trades revealed in YCharts for... Read more

This research report was jointly produced with High Dividend Opportunities co-authors Jussi Askola and Philip Mause. Global demand for natural gas and LNG (liquefied natural gas) is booming due to low natural gas prices, and because of a move by major world economies to a less polluting form of energy. Coal energy plants are quickly being replaced by natural gas, and a large number of new liquefaction projects are being developed. Through 2020, the U.S. and Australia are expected to account... Read more