Not all stock sectors are equally striking when it comes to dividend income. There are sectors that are characterized by short product cycles and cyclical business trends and therefore have less predictable cash flows. This makes them an unsafe bet for dividend investors. On the other hand, sectors with companies that consistently raise their dividend for a period of at least 10 consecutive years, present a clear competitive advantage and favorable industry dynamics.

The services sector comprises of a range of different businesses, which provide necessary services that companies choose to outsource. As long as the services provided are high quality and cost-effective, there is little reason to change vendors.
This article discusses three companies that trade in the Services sector. All three companies have reported strong full-year 2015 fundamentals and have declared high dividends. Their average dividend yield is 5.73%, which is above the sector average dividend yield of 2.85%. Their average beta is 0.47 and their average debt-to-equity ratio is 1.40, suggesting low-risk companies with effective debt management. 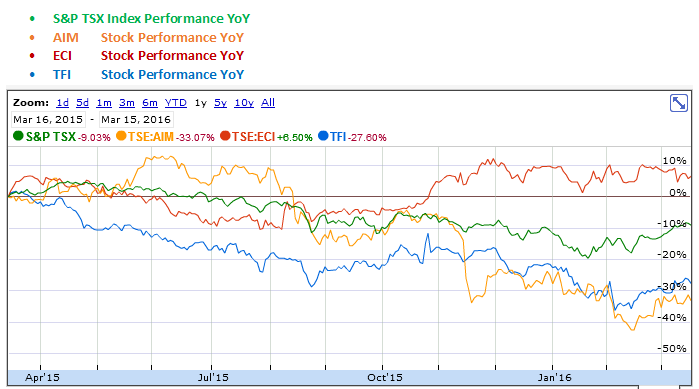 Aimia (TSE: AIM) (OTC: GAPFF) is a Montreal-headquartered data-driven marketing and loyalty analytics company that operates worldwide through its subsidiaries. Aimia also provides data-driven analytics and insights services to retailers and their suppliers and has launched a SaaS platform that delivers self-service program management solutions in a range of industries, including airlines, automotive, financial services, healthcare, hospitality, retail, technology, and telecom. It also owns and operates a range of coalition loyalty programs through its Canada; the United States and Asia-Pacific; and Europe, Middle-East, and Africa segments.

Dividend Policy: Aimia declares an annualized dividend of $0.76 per share, yielding 8.72%. The company’s current EPS is negative, so it doesn’t make sense to calculate the payout ratio. However, analysts that follow the company estimate an EPS of $0.80 for 2016, which will normalize the payout ratio to 95%.
Total dividends paid for the full year 2015 were $138.9 million, while the company repurchased $36.3 million in Q1 2015 and $223.3 million in Q4 2015 in common shares. Furthermore, it Aimia repurchased $21.8 million in common shares, taking the total common shares repurchased since November 2014 to $275 million, including over $605 million in buybacks since 2010.

Future Outlook: Since 2012, Aimia has undertaken a significant transformation, including a structural reorganization and major improvements to its core businesses. For 2016, the company is expected to take profit on the growing assets and realize table growth.

Further than providing an attractive dividend, EnerCare has deployed its capital in acquisitions to maximize shareholder value like it happened in the acquisition of Home Services business that led to significant share appreciation. This has led to a five-year total shareholder return of 232%.

Future Outlook: With the acquisition of Service Experts EnerCare expands its geographic reach and becomes a North American market leader in Home Services. The company is expected to continue delivering significant financial benefits to its shareholders by introducing strategic initiatives both in the U.S. and Canada.


TransForce (TSE: TFI) is a Saint-Laurent-based transportation and logistics company that offers its customers across Canada and the United States pickup, transport and delivery services through its subsidiaries. TransForce companies provide Package and Courier; Less-Than-Truckload; Truckload; and Logistics services through the relevant segments as well as expedited transportation and specialized delivery services to serve customers with specific needs.

FY 2015 Results: During 2015, TransForce announced the sale of its Waste Management segment, which was completed in February 2016. The sharp decline in the oil prices has led to a significant decline in the economic activity in Canada and a severe weakening in the U.S. energy market. TransForce’s diversified business model allowed the company to swiftly adjust its operations to the changing market conditions, thus delivering strong FY 2015 results. Revenues increased 18.7% YoY to $4.03 billion from $3.40 billion in FY 2014, generating a gross profit margin of 16.5% from 16.1%. Operating expenses were up 18.5% YoY to $3.76 billion from $3.17 billion, whereas operating income was up 21.5% YoY to $276.5 million from $ 227.6 million, leading to a net income of $664.5 million, up 27.8% YoY from $127.9 million in the same period last year. Moreover, TransForce declares an annualized dividend of $0.68 per share, yielding 3.08% at a payout ratio of 43%.

Looking Ahead: In the near outlook, the U.S economy is expected to be driven by higher consumer confidence and spending. In contrast, in Canada, the declining oil prices have depressed the economy and it may take some time until this situation is reversed. TransForce will continue to seek growth opportunities through investments in productivity and will implement cost-cutting policies to mitigate any negative effects. Strong free cash flows will be used towards debt repayment and shareholders will be rewarded through a share buyback.