Utility companies are popular among investors, because they consistently deliver dividends. This is due to the government restrictions placed on energy markets that provide utility companies with a monopolistic authority and thereby, with a low elasticity of demand. Moreover, utility companies offer water, power, heat and telecommunications even during uncertain financial times and therefore, their revenue streams are extremely consistent. This allows them to deliver steady dividends to their shareholders.
This article discusses three small caps utilities companies with an average dividend yield close to 3% and an average payout ratio of 62.7%. All three companies are consistently delivering cash dividends, even during a recession, whereas their average beta is 0.38. These low-risk investments with an average debt-to-equity ratio of 0.74 are safe bets for value investors, given that they also have strong fundamentals. 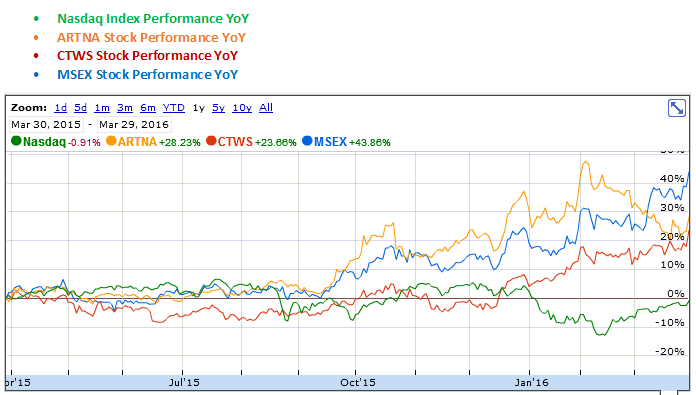 Artesian Resources (Nasdaq: ARTNA) is a Newark, Delaware-based utility company that provides water, wastewater, and other services through its subsidiaries. Artesian operates in the distribution and sale of water to residential, commercial, industrial, municipal, and utility customers in the states of Delaware, Maryland, and Pennsylvania and it also provides water for public and private fire protection to customers in its service territories. Furthermore, Artesian Resources offers contract water and wastewater management services, as well as design, construction, and engineering services. It is estimated that the company has a network of about 81,400 metered water customers through 1,218 miles of transmission and distribution mains.

Looking Ahead: The strong performance of Artesian Resources in 2015 was the result of a cost controlling policy as well as of investments made to ensure the delivery of high-quality water to customers. In 2015, the company has invested $21 million in water main improvements and new treatment systems and it is expected to continue upgrading its water and wastewater plants. The average EPS is estimated at $1.41 through 2018, the current EPS is $1.30.

Connecticut Water Service (Nasdaq: CTWS) is a Clinton, Connecticut-headquartered regulated water company that operates through Water Operations, Real Estate Transactions, and Services and Rentals segments. Connecticut Water Service supplies public drinking water, sells or donates real estate holdings and provides contracted services to water and wastewater utilities as well as leasing and rental services of residential and commercial properties to third parties. It is estimated that the company supplies water to about 123,600 customers in Connecticut and Maine.

Full Year 2015 Results: Connecticut Water Service reported revenues $103.1 million, up 1.6% YoY from $101.5 million in 2014. Total operating expenses increased 0.8% YoY to $69.4 million from $68.9 million in 2014 due to increased expenses related to benefits, payroll, and outside resources retained for cyber security, succession planning and overall risk management initiatives. Operating income was down 10% YoY to $26.6 million from $29.6 million in 2014, yet net income recorded an increase of 6.8% YoY to $22.8 million compared to $21.3 million in the same period last year.

Future Outlook: Investment in infrastructure is a growth driver for Connecticut Water Service to ensure water quality and customer health and safety. In 2015, the company invested $47.8 million in its infrastructure including pipes, pumps, storage tanks, cyber security, and water treatment and this is expected to continue in 2016 as well. Estimated average EPS is $2.28 through 2019. Current EPS is $2.04. Average earnings growth is estimated at 5% annually through 2020.


Middlesex Water Company (Nasdaq: MSEX) is an Iselin, New Jersey-based water company that engages in the owning and operation of regulated water utility and wastewater systems through its subsidiaries. Middlesex operates through the Regulated and Non-Regulated segments, collecting, treating, and distributing water to residential, commercial, industrial, and fire protection customers in New Jersey, Delaware, and Pennsylvania. The company also provides non-regulated contract services for the operation and maintenance of municipal and private water and wastewater systems in the states of New Jersey and Delaware.

Full Year 2015 Results: Middlesex Water Company has completed a successful year of operations. Compared to 2014, the company’s full year 2015 results are as follows: