The Top Food Products Stocks For 2016

The Diversified Food industry includes large caps like Kraft Heinz (Nasdaq: KHC) and Mondelez International (Nasdaq: MDLZ), but it also includes mid caps that outperform the index and deliver shareholder value. The industry includes companies that engage in the manufacturing and marketing of a range of different packaged food products, including snacks, dairy products, packaged dinners, and processed meats, among others.
This article discusses three stocks that trade in the diversified food industry. Their average debt-to-equity ratio is 0.23 and their average beta is 0.56, both indicating safe stocks with successful debt management. The average dividend yield of all three companies is close to 2%, whereas their payout ratio is 28.1%. What is impressive though is that the only mid cap in this article, Cal-Maine Foods, has the highest dividend yield and the highest dividend growth of all three companies, thus having a high growth potential. 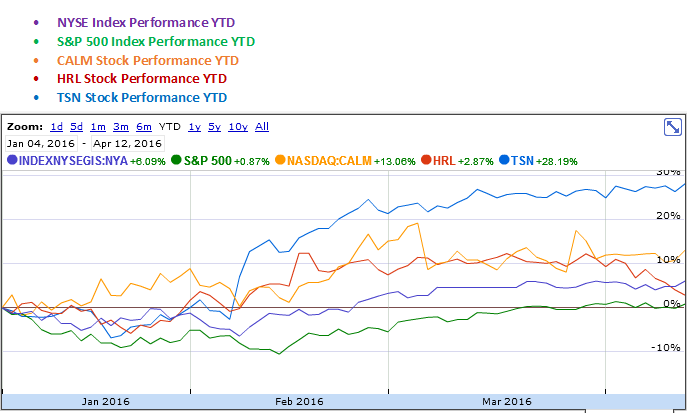 Cal-Maine Foods (Nasdaq: CALM) is a Jackson, Mississippi-based company that engages in the production, grading, packaging, marketing and distribution of shell eggs in the United States. Cal-Maine offers specialty shell eggs, including nutritionally enhanced, cage free, organic, and brown eggs to a network of national and regional grocery store chains, club stores, foodservice distributors, and egg product consumers. The company sells its products under the Egg-Land’s Best, Land O’Lake, Farmhouse, and 4-Grain brand names, as well as under private labels.

General Overview: Cal-Maine has outperformed the market +13.06% YTD. In terms of quarter results, in the third quarter of 2016, the company has demonstrated a quarterly revenues growth 0.44% YoY, exceeding the industry average of 0.25%. Revenues growth has helped boost EPS, which reached $7.22, up 581% YoY from $1.06 in the third quarter of 2015. Moreover, the company’s debt-to-equity ratio is very low at 0.02, suggesting a very successful debt management, which combined to the company’s quick ratio of 2.17, indicates the ability of Cal-Maine to cover its short-term liquidity needs.

Dividend Growth: Cal-Maine declares an annualized dividend of $1.76 per share, yielding 3.36% at a payout ratio of 24%. The company’s dividend growth in the period 2006- 2016 is 342% annually, suggesting that Cal-Maine is consistently delivering value to its shareholders through cash dividends.

Hormel Foods (NYSE: HRL) is an Austin, Minnesota-headquartered company that operates in the production and marketing of various meat and food products both in the United States and internationally. Through its Grocery Products, Refrigerated Foods, Jennie-O Turkey Store, Specialty Foods, and International & Other segments, Hormel Foods offers a range of perishable meat products, including fresh meats, frozen items, and refrigerated meal solutions, as well as poultry products, and nutritional food products and supplements.

General Overview: Hormel Foods has outperformed the market +2.87% YTD. Given that analyst consensus has set the average twelve-month target price at $40.41 and the stock trades at $40.63, it is wise to expect an upward revision of target price. Currently, Hormel Foods trades 11.13% lower than its 52w high. In terms of quarter results, in spite of the slight decline of 0.04% in quarterly revenues growth, Hormel Foods has an EPS of $1.38, in line with the industry average and a 5y PEG of 1.72, which exceeds the industry average of 1.37.

Debt Management: Hormel Foods has a low debt-to-equity ratio of 0.06, indicating effective debt management. Currently, the company has $185 million of short-term debt that relates to the Applegate acquisition and $250 million of long-term debt, which allows Hormel Foods to continue seeking for new investments.

Dividend & Future Outlook: Hormel Foods declares an annualized dividend of $0.58 per share, yielding 1.43% at a payout ratio of 42%. The company’s dividend growth in the period 2000- 2016 is 65.7% or 4.1% annually. Although revenue growth is relatively challenged, Hormel Foods is expected to continue releasing favorable operating income and net income results, expecting an EPS in the range of $1.50 to $1.56.

General Overview: Tyson Foods has outperformed the market +28.19% YTD, whereas the consensus average twelve-month target price is $68.73. Currently, the stock trades 0.68% lower than its 52w high and given its recent performance (+26.47% in 3m), it is expected that the target price will be revised upward. Tyson Foods has a low debt-to-equity ratio of 0.61, suggesting effective debt management and its beta is 0.21. In terms of quarter results, quarterly revenues growth declined 0.15%, yet the company’s EPS of $3.35 exceeds the industry average of $1.38.

Q1 2016 Results: In the first quarter of 2016, Tyson Foods reported the following results:

The Board of Directors of The Kraft Heinz Company (Nasdaq: KHC) today declared a regular quarterly dividend of $0.40 per share of common stock payable on March 26, 2021, to stockholders of record as of March 12, 2021.... Read more

Conagra Brands: This Overlooked Dividend Stock Is Paying Over 3%

'Income Factory' Or 'Dividend Growth Investing?' - You Can Have It Both Ways

The Board of Directors of The Kraft Heinz Company (Nasdaq: KHC) today declared a regular quarterly dividend of $0.40 per share of common stock payable on Dec. 18, 2020, to stockholders of record as of Nov. 27, 2020.... Read more