Conglomerates have diversified interests in different industries by owning a controlling stake in smaller companies, which they conduct business separately. Typically, companies that are structured as conglomerates have exposure in different sectors and thereby, their dividend yield may fluctuate, but it is steadily above the average dividend yield of the market. Moreover, due to their diversified interests, conglomerates can offset losses in one industry with gains in another, thereby diversifying risk and achieving strong financial results.
This article discusses three mid-cap and large-cap conglomerates. All three stocks trade slightly lower than their 52wk high while two of them have outperformed the market and the NYSE Composite Index. Moreover, their average dividend yield is 1.35% at an average payout ratio of 20.0%, with an average EPS of $6.08. Combined with a low debt-to-equity ratio of 0.61, and an average beta of 1.16, suggests that all three companies can make a safe bet for investors seeking dividend income. 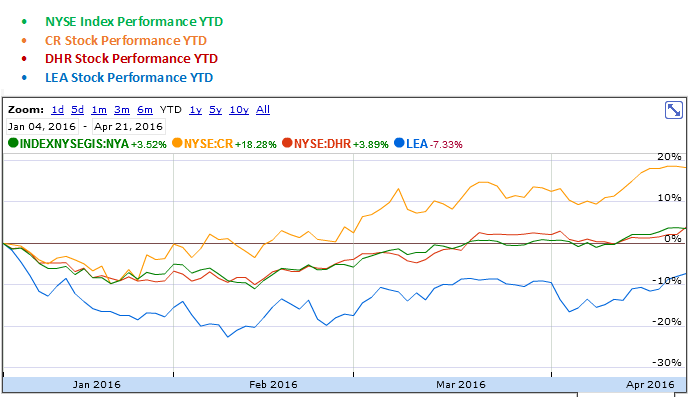 Crane (NYSE: CR) is a Connecticut-based conglomerate that engages in the manufacturing and sale of engineered industrial products in the United States, Canada, United Kingdom, and internationally. Through its Aerospace & Electronics, Engineered Materials, Fluid Handling, and Payment & Merchandising Technologies segments, Crane serves a range of industries, including aerospace and defense, chemical, oil and gas, and power markets as well as several industrial and consumer related end markets under the Crane, Centerline, Jenkins, Krombach, Saunders and Xomox brand names, among others.

Dividend Growth: Crane delivers an annualized dividend of $1.32 per share, yielding 2.33% at a payout ratio of 34%, in line with the average payout ratio 39.2% of the Conglomerates industry. Moreover, Crane’s dividend growth since 2000 is 230% or 14.4% annually. Dividend growth, combined with a strong EPS of $3.89 that exceeds the industry average EPS of $0.50, suggests a consistently dividend-paying company. Debt-to-equity ratio is 0.66.

2016 Outlook: Crane is well-positioned for a series of aerospace programs that the company plans in the coming years and is on track to deliver sustainable revenue growth and margin expansion in the coming quarters. Although foreign exchange challenges and commodity deflation are expected to persist in 2016, Crane plans to realize more than $25 million in repositioning and synergy savings to drive its Fluid Handling segment. Moreover, the company will continue seeking new investment opportunities. 2016 EPS is estimated between $3.85 and $4.15, in line with 2015, whereas estimated free cash flow is in the range of $190 to $220 million, flat up to 16% compared to 2015.

Danaher (NYSE: DHR) is a Washington-based conglomerate that engages in the design, manufacturing, and marketing of professional products and services both in the U.S. and internationally. Through its Test & Measurement, Environmental, Life Sciences & Diagnostics, Dental, and Industrial Technologies segments, Danaher offers medical, industrial, software and commercial products and services.

Dividend Growth: Danaher declares an annualized dividend of $0.64 per share, yielding 0.67% at a payout ratio of 14%. Although the company’s dividend payout ratio is lower than the average payout ratio 39.2% of the Conglomerates industry, Danaher demonstrates a dividend growth of 700.0% in the period 2000-2016 or 43.8% annually. Moreover, EPS $4.74 is considerably higher that the industry average EPS of $0.50, which combined with the low debt-to-equity ratio of 0.51, suggests a financially healthy company that consistently delivers shareholder value.

Future Outlook: Danaher is expected to continue delivering profitable results and create shareholder value for 2016 as well. The adjusted EPS for the full year 2016 is expected in the range of $4.80 and $4.95 while analysts estimate an average earnings growth rate of 12.54% annually through 2020.


Lear (NYSE: LEA) is a Michigan-headquartered conglomerate that engages in the design, development, engineering, manufacturing, assembling and supply of automotive seating, electrical distribution systems, and related components. Through its Seating and Electrical Segment, Lear delivers its products to automotive original equipment manufacturers in the United States and internationally.

Strong Full Year 2015 Results: Lear delivered its 6th consecutive year of higher revenues, higher EPS, and strong cash flow. In 2015, the company continued seeking for growth opportunities as well as its expansion to low-cost regions. The strategy has led to the following results: