These Retailers Have A Foot In The Dividend Door

The retailing industry has been the first to endure the negative effect of an unstable macroeconomic environment that forces many retailers out of business. On the other hand, the U.S. Census Bureau reports that the total sales for the first quarter of 2016 (January through March) were up 2.8% YoY. For the coming year, retailers with optimized distribution systems and enhanced supply chains are expected to stay ahead of the competition as consumers expect greater products and faster delivery when shopping online.
This article discusses two retailers that trade on the NYSE. Their average debt-to-equity ratio is 0.03 while their average beta is 0.64. Both metrics suggest financially healthy companies with effective debt management. Both deliver strong cash flows and dividends, with an average yield of 2.52% and an average payout ratio of 40%. Their average dividend per share is $0.95. According to the analysts following these companies, in 2016 they will sustain their cash flow performance and will remain focused on dividend payments, thereby returning shareholder value. 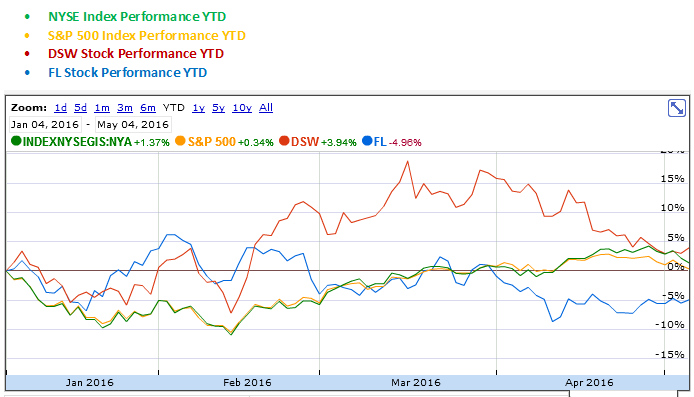 DSW (NYSE: DSW) is an Ohio-headquartered company that operates as a branded footwear and accessories retailer in the United States. Through its DSW and Affiliated Business Group segments, DSW offers dresses, casual and athletic footwear, and accessories under various brands for men, women and children. The company’s network consists of 474 stores in 42 states as well as its online store and supplied footwear to 384 locations in the United States.

Dividend Growth
DSW declared an annualized dividend of $0.80 per share, yielding 3.25% at a payout ratio of 52%, which is higher than the Apparel, Footwear & Accessories Industry payout ratio of 35%. The company has delivered a dividend growth of 1.1% or 2.8% annually since 2012 and it is expected to further increase its dividend as a result of strong cash flows.

2016 Outlook
For 2016, DSW will continue to expand into new markets with the proper store format and will extend its customer reach through new categories. Total revenues are expected to grow between 8% and 10% as a result of the opening of 32 net new stores and $100 million in revenues from Ebuys. Operating expenses are estimated to be about 10% higher due to increased marketing and store expenses. In terms of EPS, analysts estimate an average EPS of $1.66 through 2019, up 8% from current EPS of $1.54. Also, analysts expect 7% growth for 2017 and a 5-year average earnings growth of 9.33% per annum.

Full-Year 2015 Financial Results
In 2015, Foot Locker has recorded an all-time best performance in many areas, including an adjusted EBIT of 12.8%, increased EPS, and higher revenues. This was the result of the company’s focus on productivity, sales, and ROIC. Moreover, Foot Locker has added 111 new stores to its network, has closed 151 stores and has remodeled or relocated 209 stores in the fiscal year 2015. The company’s financial results for the full-year 2015 are as follows:


Dividend Strength & Outlook
Foot Locker has announced a 10% increase in its quarterly dividend to $0.275 per share, thereby declaring an annualized dividend of $1.10, yielding 1.79% at a payout ratio of 29%. The payout ratio is slightly lower than the average Apparel, Footwear & Accessories Industry payout ratio of 35%. Moreover, at the end of 2015, Foot Locker had $637 million remaining on the $1 billion share repurchase program authorized in 2014. Its dividend growth for the period 2010-2016 is 83.3% or 13.9% annually, indicating the company’s focus on cash dividends.
Due to its solid financial position and a history of generating strong cash flows, Foot Locker is expected to continue returning a substantial amount of cash to shareholders while investing in strategic initiatives that can drive its financial performance forward. Analysts estimate an average earnings growth of 10.48% through 2020 and an average EPS of $5.28 from current EPS $3.84, a 37.4% increase.

I've been covering a lot of consumer retail stocks lately and it's a mixed bag of companies that are struggling and those that at are actually doing quite well. The good thing is that all these companies, whether doing good or bad, are generally being discounted because of fears that Amazon (AMZN) and other online retailers will continue disrupting the market. This leaves the opportunity to buy many stocks at a deep discount. In my opinion, Designer Shoe Warehouse (DSW) is one of those stocks... Read more

Actionable Conclusion (1-10): Analysts Alleged 11.3% To 19.9% Net Gains For Ten Miller/Howard SDI Dogs By September 2018 Four of ten top dividend-yielding Miller/Howard SDI dogs were verified as being among the top ten gainers for the coming year based on analyst 1-year target prices. So this quarter the dog strategy for the Miller/Howard SDI as graded by Wall St. wizards was 40% accurate. Ten probable profit-generating trades were revealed in Yahoo Finance for September, 2018:... Read more

March Featured M/H SDI Dogs From 8 Sectors Yield (dividend/price) results from here April 4 verified by Yahoo Finance for thirty stocks from eight of eleven Morningstar sectors revealed the actionable conclusions discussed below. Miller/Howard Investments, publisher of the index states: The Miller/Howard Strategic Dividend Index (MHDT) seeks to capture and distill all we have learned over nearly a quarter century of active management of dividend companies. Our strategic, rules-based... Read more

The following is a list of companies trading ex-dividend on Wednesday, December 14th:Get daily under-the-radar research with StreetInsider.com's Stealth Growth Insider Get your 2-Wk Free Trial here. Strattec Security (NASDAQ: STRT) declared a quarterly dividend of $0.14 per share, or $0.56 annualized. The dividend will be payable on December 30, 2016, to stockholders of record on December 16, 2016, with an ex-dividend date of December 14, 2016. The annual yield on the dividend is 1.5... Read more

In compiling the Dividend Champions list (here) I get to see which companies are nearing the anniversaries of their previous dividend increases. Most of these firms raise their payout about the same time every year, but some companies go longer before boosting their dividends, and this can raise concerns about their streaks of increases. Other streaks end because of unsustainable yields (or payout ratios) or because the companies are acquired by other firms. Note that all references to "CCC"... Read more