The dividend yield is often a good indication of how much cash flow investors are getting for every dollar they invest in an equity position. The milestone of 3% is considered a high dividend yield. If you require a minimum stream of income for your investment, you can kind of secure your cash flow by investing in stocks that pay high and relatively stable dividend yields.
This article discusses three small-cap and mid-cap independent investment companies that trade on the NYSE and the Nasdaq Composite Index. All three companies currently trade close to their 52 week high. Their average dividend yield is 5.66%, way above the milestone of 3%, and their average payout ratio is 85%. Given that the industry average payout ratio is above 130%, the average payout ratio of these companies is good. Average dividend per share is $1.32. Finally, the average beta of 1.43 and the average debt-to-equity ratio of 0.41 indicate that all three companies do not rely on creditors so much to finance their business. 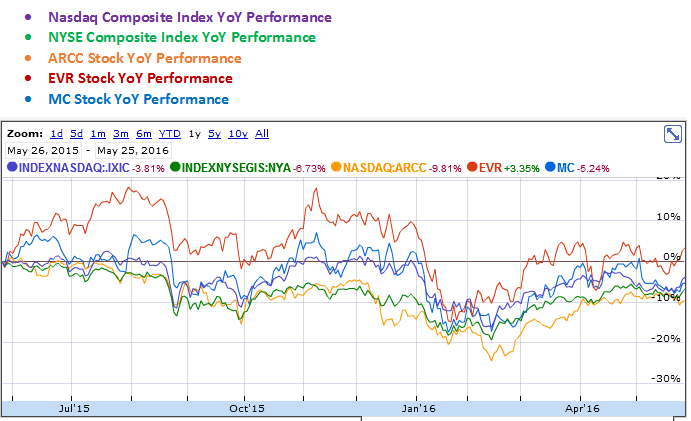 Ares Capital (Nasdaq: ARCC) is a New-York based business development company that provides consultation in the acquisition, recapitalization, mezzanine debt, restructurings, rescue financing, and leveraged buyout transactions of companies with an EBITDA between $10 million and $250 million. Ares Capital works mainly with companies engaged in the basic and growth manufacturing, business services, consumer products, healthcare products, and information technology sectors, but it also considers investments in the restaurant, retail, and oil and gas industry.

Dividend Strength
On June 13, 2016, Ares Capital declared a quarterly dividend of $0.38, thus reaching an annualized dividend of $1.52 per share. The dividend yield is 10.14%, making the stock quite attractive, whereas the payout ratio is 117%, slightly lower than the Investment Services Industry payout ratio of 130.5%. Moreover, for the period 2005-2016, the dividend growth is 26.7% or 2.4% annually. This suggests a company that sustainable returns shareholder value. During the first quarter of 2016, the company repurchased about 393,000 shares at an average price of $13.94 and a total cost of $5.5 million and it focuses on capitalizing on active share repurchases in the coming quarters. To that end, Ares Capital has recently extended the term of its $100 million stock repurchase program from September 2016 to February 2017.

Future Outlook
In the coming quarters, Ares Capital is expected to capitalize on the forthcoming market correction deriving from the easing investor concerns. The company will remain focused on seeking selective transactions with a strong relative value that could deliver long-term growth and return shareholder value in the near-term. Analysts estimate an average EPS of $1.60, up 23.1% from current EPS of $1.30, which will bring the payout ratio down to 95%.

Dividend Strength & Outlook
In the first quarter, Evercore returned $123.1 million to its shareholders in the form of dividends and repurchases. On May 25, 2016, the company declared a quarterly dividend of $0.31, thereby reaching an annualized dividend of $1.24, which yields 2.42% at a payout ratio of 125.3%. From 2008 to 2016, the dividend growth is 158.3% or 19.8% annually, suggesting a dividend grower stock with a potential to outperform the market. Evercore is the only stock to have outperformed its peers and the NYSE Composite Index YoY, as shown in the graph above. Through 2018, analysts estimate an average EPS of $2.01, up 102.7% from current EPS of $0.99, which will bring the payout ratio down to 62%.

Strong Q1 2016 Results
Despite market volatility in the first two months of 2016, Moelis & Co managed to successfully complete its M&As. Average fee per transaction increased and the company has participated in a recurring restructuring activity that has led to a higher level of retainers. These factors have produced revenues that climbed to $126.4 million, up 27.1% YoY from $99.4 million in Q1 2015. Total operating expenses grew 24.9% YoY to $97.5 million from $78.0 million due to a 28.4% YoY increase in the Selling, General and Administrative Expenses. Operating income grew 35.1% reaching $28.9 million from $21.4 million and net income grew 30.5% to $7.0 million from $5.3 million, a 30.5% YoY increase.

Dividend Strength & Outlook
On May 18, 2016, Moelis & Co declared a quarterly dividend of $0.3, thereby reaching an annualized dividend of $1.20. This yields 4.43% at a payout ratio of 75.0%. The company’s dividend growth since 2014 is 50%, or 25% annually, suggesting that the company is a strong dividend grower. For the next three years, analysts estimate an average EPS of $1.82, up 13.5% from current EPS of $ 1.60. What is impressive about Moellis is that, although it is a small cap with a market cap of $1.43 billion, it can deliver strong dividends and can be competitive.