The advertising environment is becoming increasingly competitive, leading more and more adverting and marketing companies to outsource their services. Companies with large internal advertising segments consider it more effective to hand their operations to specialized businesses so that the can remain on top of the competition and deliver strong results. In addition, advertising companies, being normally structured as corporations, they deliver strong dividend and have dividend yields that are above average compared to the industry.
This article discusses three advertising and marketing companies, two mid-caps and one large-cap, which trade on the NYSE and the Nasdaq and have outperformed the market by more than 10% YoY. At the time of the writing, all three companies trade really close to their 52w high. Their average debt-to-equity is 1.57, which combined to an average beta of 1.32 makes them a safe investment choice. Average dividend yield is 3.17% with an average payout ratio of 68% and an average dividend of $1.87 per share. 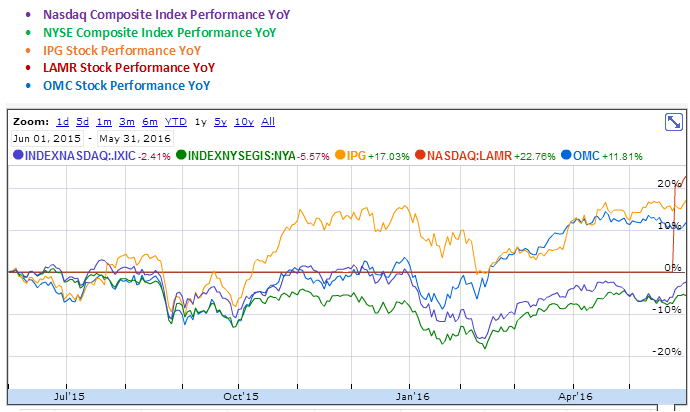 Remarkable Q1 2016 Results
In the first quarter of 2016, Interpublic Group achieved strong growth with its existing clients as well as increases in the food & beverage, healthcare, retail, technology, and telecom sectors. Revenues grew 3.9% YoY to $1.74 billion from $1.68 billion generating an organic revenue growth of 6.7% YoY, mainly driven by strong offerings in all disciplines and geographic sectors. Total operating expenses grew 2.9% YoY to $1.74 billion from $1.69 billion, whereas operating profit reached $21 million from $8 million in the first quarter of 2015, a 162.5% YoY increase. Although the company's first quarter is seasonably small in terms of revenue, while total costs are distributed quite evenly throughout the year, it positive that Interpublic managed to increase its operating profit and sustain growth. Net income reached $5.4 million, up 200.0% YoY from $1.8 million losses in the same quarter last year. Operating cash flow for 2015 reached $674 million, down 0.7% YoY from $669.5 million in 2014.

Dividend Health & Forward Outlook
On May 19, 2016, Interpublic Group declared a quarterly dividend of $0.15, thereby reaching an annualized dividend of $0.60, yielding 2.51% at a payout ratio of 54%. The company is delivering a dividend growth of 58% or 3.6% annually since 2000 and is expected to remain focused on returning shareholder value in the coming quarters. For the coming quarters, Interpublic Group is expected to remain focused on seeking growth opportunities in all geographic regions and contribute to its strong results. The company implements a cost management strategy that is expected to meet or even exceed the margin targets for 2016. Analysts estimate an average EPS of $1.61, up 44.6% from current EPS of $1.11 through 2019 and an average dividend of $0.67 per share, up 11.7% from current DPS of $0.60. Expected average payout ratio is at 42.0%. Average earnings growth is estimated at 7.50% annually through 2020.

Strong Q1 2016 Results
In the first quarter of 2016, Lamar Advertising delivered strong results, mainly due to good performance in most of its categories. Services grew 13%; real estate grew 12%; hospitals and healthcare grew 7%, and restaurants grew 4%. In particular, Lamar’s Q1 2016 financial results are as follows:

Q1 2016 Results
In the first quarter of 2016, Omnicom remained focused on delivering innovative ideas and solutions to its customers across all marketing disciplines as well as on moving into new service areas with the creation of Omnicom Public Relations Group and Omnicom Healthcare Group. In spite of the uncertainty in the broader economic environment, fluctuations in the capital markets, and consumer insecurity following the tragic events in Paris and Brussels, the company has managed to exceed its expectations in the Q1 2016 results.
Revenues reached $3.5 billion from $3.47 billion, a 0.9% YoY increase, in spite of the foreign exchange impact that reduced revenues by 2.8% or $97 million. Gross profit margin was 25.0%, slightly higher than 24.5% in the same period last year. Total operating expenses were in line, 0.5% higher YoY to $3.1 billion from $3.09 billion. Operating income reached $392.1 million, up 3.8% YoY from $377.7 million, generating a net income of $218.4 million, up 4.4% YoY from $209.1 million in the first quarter of 2015. Operating cash flow for 2015 was $2.2 billion, up 47.1% from $1.5 billion in 2014.

Dividend increase
On May 25, 2016, Omnicom declared a dividend increase of 10.0%, from $0.5 per share to $0.55 per share. The company has an annualized dividend of $2.00 per share, yielding 2.40% at a payout ratio of 44.6%. significantly lower than the average payout ratio 121.9% of the Advertising Industry. However, the company distributes 45% of its retained earnings to its shareholders and during the first quarter, it generated $360 million in free cash flow and returned over $320 million to shareholders through dividends and share repurchases. Dividend growth since 2001 is 150.0% or 10.0%.

Forward Outlook
For the coming quarters, Omnicom stays focused on meeting its internal targets by generating sufficient free cash flow, paying dividends, and seeking new investment opportunities. Analysts estimate an average EPS of $5.44 through 2019, up 21.3% from current EPS of $4.48 and a dividend per share of $2.29 through 2018, up 14.7% from current DPS of $2.00. The average payout ratio is estimated at 42.0% through 2019. Average earnings growth is estimated at 7.13% annually through 2020.

In this article series, we provide a weekly summary of dividend changes.A summary table provides relevant data and key statistics of dividend increases.We list dividend cuts and suspensions.A table of ex-dividend dates for the next two weeks is included, and we highlight an interesting candidate. This article was co-produced with James Marino Sr of Portfolio Insight. We monitor dividend increases for stocks using Dividend Radar, weekly automatically generated... Read more

Dividend Challenger Highlights: Week Of May 31

A weekly summary of dividend activity for Dividend Challengers.Companies which changed their dividends.Companies with upcoming ex-dividend dates.Companies with upcoming pay dates.Introduction The Dividend Champions list is a monthly compilation of companies which have consistently increased their annual dividend payouts, and the latest edition may be found here. However, since this list is only produced once per month, the data in it can quickly get out of date. Furthermore,... Read more