There are many Canadian stocks that trade both on the NYSE (as ADRs) and the Nasdaq stock markets. Mind you, that a single ADR may represent a group of foreign shares held by the bank. If dividends are issued in the company’s country of operation, in this case Canada, the dividends will be deposited in the bank, and will be converted to U.S. dollars before they are distributed to the ADRs holders. Another thing you need to know is that tax treatment of ADRs is the same as U.S.-listed securities, except if there are foreign withholding taxes for income distributions, such as dividends or sale proceeds.
This article discusses three Canadian companies that also trade on the NYSE. Their average debt-to-equity ratio is 0.52, which, combined to an average beta of 1.15, makes these stocks a safe bet for risk-averse investors. In addition, their average dividend per share is $0.75, yielding 2.74% at an average payout ratio of 37.3%. Although these stocks trade in different sectors and they can only be compared based on their fundamentals, from the analysis it becomes evident that they are growth-oriented and are set to return shareholder value. 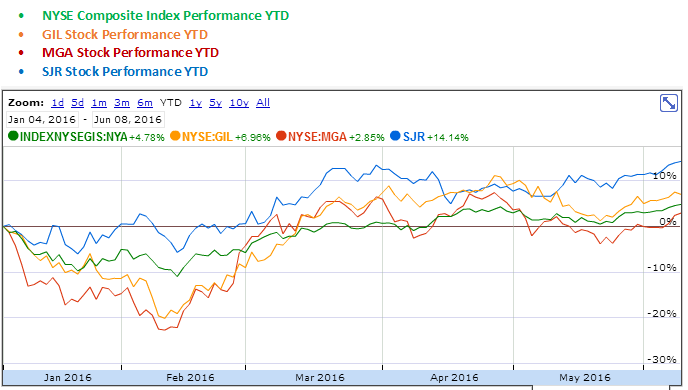 Q1 2016 Financial Highlights: In the first quarter of 2016, Gildan Activewear delivered strong results in spite of the drop in revenues as a result of an unseasonably warm weather at the end of 2015. The higher opening fleece inventory levels in the beginning of 2016 have had a negative impact on the fleece shipments, causing a sluggish sell-through in the department stores. More specifically, Q1 2016 results for Gildan Activewear are as follows:


Dividend Growth: During the first quarter, Gildan Activewear has spent about $140 million for the share repurchase program that was set up in February. As of the end of April, the company had repurchased 8.6 million shares under our total $12.2 million share repurchase program. In addition, on May 4, 2016, Gildan Activewear declared a quarterly dividend of $0.078 per share, thereby reaching an annualized dividend of $0.31. The dividend yield is 1.0.3% and the payout ratio is 22%, significantly lower than the average payout ratio 79.5% of the Retail Apparel Industry. The company’s dividend growth since 2011 is 4.0% or 0.8% annually with a dividend increase from $0.075 to $0.078 per share.

The Bottom Line: Gildan Activewear focuses on implementing a strategy that could drive sales growth, expand capacity, and generate cost savings. The company focuses on generating long-term growth and generate strong shareholder returns. Through 2018, analysts estimate an average EPS of $1.82 per share, up 25.3% from current EPS of $1.45. With an estimated dividend per share around $0.35, up 12.2% from current DPS of $0.31, the expected payout ratio will be 19%.

The Bottom Line: In January, Magna International acquired Getrag, a leading company in the dual-clutch transmissions market. The acquisition is expected to improve Magna’s positioning to meet OEM needs for improved fuel efficiency and help the company deliver high growth through 2026. In addition, Magna International signed a purchase agreement to acquire Telemotive AG, a leading engineering service provider in the field of automotive electronics, aiming to deliver innovative solutions and full vehicle electronics expertise to the market. Through 2018, average EPS is estimated at $5.77, up 16.2% from current EPS of $4.97 and average dividend per share is expected at $1.09, up 8.7% from current DPS of $1.00. The average payout is estimated at 19%.

Dividend Strength: On April 14, 2016, Shaw Communications declared a monthly dividend of CAD 0.09875, thereby reaching an annualized dividend of CAD 1.19 (or $0.94). The dividend yield is 4.79% and the payout ratio is 70.1%, lower than the average payout ratio 165% of the Communications Equipment Industry. Apparently, Shaw Communications distributes a large percentage of its retained earnings to its shareholders in the form of dividends, but, at the same time, the company invests in new markets and capitalizes on growth opportunities. In addition, the company has delivered a dividend growth of 295% since 2000, or 18.4% annually, raising its dividend from CAD 0.025 to CAD 0.09875 per share.

The Bottom Line: Shaw Communications is committed to delivering superior Internet customer experience. To that end, the company has deployed next generation converged cable access platforms (CCAP) in most of its key markets, thereby dramatically expanding its number of Internet carriers and achieving the lowest network congestion levels. In addition, on January the company has introduced FreeRange TV, attracting more than 210,000 customers by the end of March, and generating approximately 70% usage. Through 2018, analysts estimate an average EPS of $1.60, up 19.7% from current EPS $1.34 and an average dividend of $1.14 per share, up 20.9% from current DPS of $0.94. thereby generating a payout ratio around 71.0%.

Rogers Communications Stock Could Be a Solid Dividend Play Americans’ cell phone bills have gotten quite expensive over the years, but north of the border, consumers are paying even more. According to a recent report, Canadians are, on average, paying 20% more than Americans on their cell phone plans. For a 2GB data plan with unlimited talk and text, Canadians pay an average of $74.00 per month, compared to $60.00 in the U.S. For a 5GB data plan, the average Canadian bill is $87.00 per... Read more