Many stocks of the London Stock Exchange also trade on stock exchanges like the NYSE or Nasdaq in the form of ADRs, offering a great opportunity to U.S. investors to capitalize on growth. ADR stands for American Depositary Receipt and it represents 100% ownership to the foreign company. ADRs trade in over-the-counter (OTC) markets, are issued by U.S. depositary banks and are typically equity rather than debt or money market assets. ADRs can offer high dividends like common U.S shares and their prices mirror the price changes in the foreign market. Of course, as there is always the risk of political events and macroeconomic instability, like a Brexit, one should be able to pick stocks that are offered at a relatively low price, keeping a long-term view.
This article discusses two UK ADRs that trade on the NYSE. Their average dividend per share is $1.24, yielding an average dividend yield of 4.04% at an average payout ratio of 54.6%. Although the stocks trade in different industries, the comparison is based on the fact that they are both foreign stocks trading on the U.S. market and have had significant returns over the past five years. AZN has returned 16.48% and IHG has gained 61.92%, suggesting that both stocks have a stable stock performance. 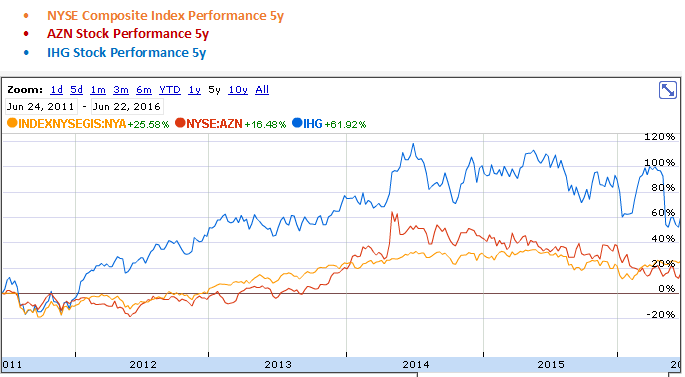 AstraZeneca PLC (ADR) (NYSE: AZN) is a London, United Kingdom-based biopharmaceutical company that engages in the discovery, development, and exploitation of prescription medicines for the treatment of a range of diseases related to the autoimmune, cardiovascular, infection, inflammation, gastrointestinal, metabolic, neuroscience, oncology and respiratory diseases. AstraZeneca has ongoing collaboration agreements with Astellas, Celgene Corporation, Eli Lilly and Company, FibroGen, French National Institute of Health and Medical Research (Inserm), Foundation Medicine, Inc., Heptares Ltd and Immunocore Limited, while its pipeline includes 146 projects with 125 in the clinical phase of development.

Dividend Strength: On February 5, AstraZeneca declared a semi-annual dividend of $0.95 per share, thereby reaching an annualized dividend of $1.90 per share. The dividend yield is 6.62% (at the time of the writing), significantly higher than the average dividend yield 2.29% of the Healthcare Industry, whereas the payout ratio is 83%. The Board of the company has adopted a dividend policy that aims to sustain dividend growth on an annual basis, taking into consideration earnings fluctuations and the changing market conditions. Since 2000, dividend growth is 271.8% or 17.0% annually.

Q1 2016 Results: In the first quarter of 2016, InterContinental Hotels Group has expanded its luxury and upscale presence in major cities. The company has reopened InterContinental New York Barclay following a $180 million refurbishment program. Moreover, it has signed five additional landmark properties for InterContinental hotels and resorts. Compared to Q1 2015, the company’s first quarter 2016 results are as follows:


Perhaps the only concern about InterContinental Hotels Group is the high debt-to-equity ratio of 4.01. This ratio indicates that the company has been borrowing aggressively to finance its growth and may face a burden of additional interest expenses in the coming quarters. On the other hand, IHG has successfully dealt with the challenging market conditions, driving occupancy levels at double-digit growth in Mexico and Canada. In the U.S. market, the company added 10,000 rooms to its pipeline, thus remaining competitive and sustaining growth in the Americas region.

'Tis The Season For REIT Dividends

Is Pfizer The Best COVID Vaccine Play For Dividend Investors?

Seeking AlphaIs Pfizer The Best COVID Vaccine Play For Dividend Investors?Nov. 18, 2020 10:33 AM ET|| Includes: AZN, AZNCF, BNTX, JNJ, MRNA, PFEby: Seeking AlphaSeeking Alpha OfficialSummaryVaccine makers are in the spotlight, and several of them pay high dividend yields.But which is the right choice for YOUR dividend portfolio?We looked at PFE, JNJ, and AZN to see how they compare on factors like Dividend Safety, Growth, Yield, and Consistency.Finally, says Big Pharma, there’s a... Read more

Why Pfizer's 4% Yield Is Your Best Covid-19 Vaccine Play