Grocery retailers have an average dividend yield of 3.54%, which is higher than the S&P 500 yield (2.17%). Normally, grocery retailers offer food, general merchandise, health and beauty care, and pharmacy products at competitive prices and their products are of superior quality aiming to attract and retain more customers. In the United States, the trends for the grocery store industry insinuate that consumers are looking for convenience, pushing retailers to expand and invest in fresh produce and foods.
This article discusses three grocery retailers, two large-cap and one small-cap, that trade on the NYSE and the Nasdaq. The small cap (Weis Markets) has outperformed the NYSE and its peers 10.67% YTD, whereas the two other companies have experienced losses YTD, like the NYSE Composite Index and the Nasdaq Composite Index. In addition, the small-cap carries no long-term debt at all and has the most balanced payout ratio (49%). All three companies have an average beta of 0.71, suggesting low risk, whereas their average dividend per share is $0.74, yielding 1.83% at an average payout ratio 36%. 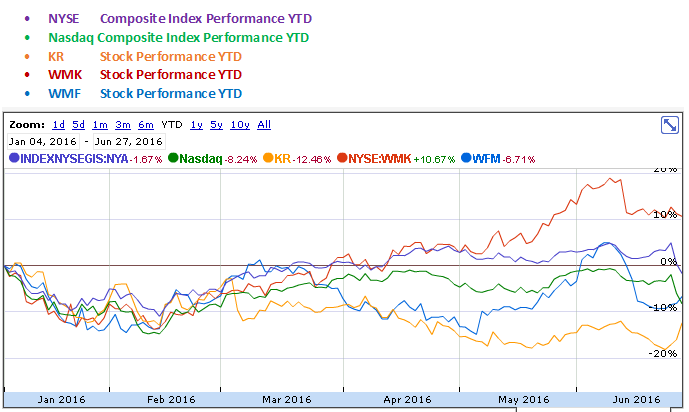 Q1 2016 Results: In the first quarter of 2016, The Kroger continued to implement its growth plan aiming to meet its financial goals by strengthening its customer relationships and growing its market share. The Kroger’s consistency in financial performance can be seen in its Q1 2016 results as follows:


Dividend Growth & Prospects: The Kroger implements a long-term financial strategy of using its operating cash flow to repurchase shares and fund its dividends. In the period 2013-2016, the company returned $1.3 billion to its shareholders in the form of cash dividends and $3.8 billion through share repurchases. On June 23, The Kroger declared a quarterly dividend of $0.12 per share, reaching an annualized dividend of $0.48 per share. The dividend yield is 1.31% at a payout ratio of 22%, in line with the average payout ratio 23.6% of the Grocery Stores industry. In addition, The Kroger has a dividend growth 84.6% or 8.5% annually between 2006 and 2016. Through 2020, analysts estimate an average EPS of $2.54, up 18.7% from current EPS of $2.14, and an average dividend of $0.48 per share, in line with current DPS. These estimates will generate a payout ratio around 19.0%. Additionally, average earnings growth is estimated at 9.53% annually.

The Bottom Line: The Kroger’s “Customer First” initiative includes low pricing, store quality and superior customer service and has helped the company to achieve its long-term success. The strategic investment with Lucky’s Market in April, a specialty grocery store chain focused on natural, organic and locally-grown products, is expected to add value to The Kroger. Lucky’s Market is aligned with the “Customer First” philosophy in providing fresh organic and natural foods to the customers.

Q1 2016 Results: In the first quarter of 2016, Weis Markets delivered strong results due to an increase in frozen, pharmacy and fresh products revenues. The company continued its long-term investment in upgraded supply chain and store support efficiencies to deliver superior customer service and this was translated into its financial results. In particular, compared to Q1 2015, Weis Markets delivered the following Q1 2016 results:


Dividend Growth & Prospects: On April 21, Weis Markets declared a quarterly dividend of $0.30 per share, reaching an annualized dividend $1.20 per share. The dividend yield is $2.45% and the payout ratio is 49%, which is higher than the average payout ratio 23.6% of the Grocery Stores industry. Weis Markets distributes nearly 50% of its retained earnings to its shareholders in dividends and continues to seek investment opportunities. The dividend growth since 2000 is 11.1% or 0.7% annually.

The Bottom Line: Weis Market focuses on customer satisfaction, thereby delivering strong results. Although its dividend growth is not spectacular, the company is consistent in returning shareholder value and sustaining growth. Its operating cash flow is 1.9 times its net income, which is a positive indication of the company’s cash flow position and ability to generate dividend income. Weis Markets is a small-cap with a strong growth potential.

Dividend Growth & Prospects: On June 7, Whole Foods Market declared a quarterly dividend of $0.135, thereby reaching an annualized dividend of $0.54 per share. The dividend yield is 1.73% and the payout ratio is 36%, which is higher than the average payout ratio 23.6% of the Grocery Stores industry. Dividend growth since 2011 is 35.0% or 7.0% annually. Through 2019, analyst consensus estimates an average EPS of $1.69, up 13.4% from current EPS of $1.49 and an average dividend of $0.60 per share, up 11.1% from current DPS of $0.54. These estimates will generate a payout ratio around 36.0% in line with current payout ratio, demonstrating that Whole Foods Market maintains a stable percentage of distribution of its retained earnings to its shareholders in the form of cash dividends. Also, average earnings growth is estimated at 8.07% annually.

The Bottom Line: Whole Food Markets is one of the leading grocery retailers in the U.S. with strong brand recognition and high-quality standards. The company’s competitive pricing and opportunity to expand overseas will help Whole Foods Markets to anticipate the economic changes in the American economy and achieve a stronger business growth.

The following is a list of companies trading ex-dividend on Thursday, October 27th:PNM Resources (NYSE: PNM) declared a quarterly dividend of $0.22 per share, or $0.88 annualized. The dividend will be payable on November 14, 2016, to stockholders of record on October 31, 2016, with an ex-dividend date of October 27, 2016. The annual yield on the dividend is 2.6 percent.Find out which companies are about to raise their dividend well before the news hits the Street with... Read more