Is There Still Dividend Potential in Food Retail?

Investments in stocks of food retailers have long been considered investments in a countercyclical industry which fares well during the bad times. Now, however, trends seem to be changing despite strong inflation in retail food prices. Value-obsessed consumers are trimming their grocery purchases and seeking low prices amid the economic uncertainty and rising unemployment, which is fueling competition and hurting sales. The industry is seeing price wars that are squeezing margins across the board. Still, investments in the stocks of most food retailers represent good choices for the times of market turmoil. Especially attractive are high-yielding retailers that are capturing market share in the fast-growing emerging nations, the market's future food retail giants.

The global food retail market grew 5.9% in 2011 to $5.4 billion. Analysts at MarketLine, an information company, forecast that the industry will sustain a similar rate of growth through 2016, when the total food retail market will reach $7 trillion. The cumulative increase in the industry size between 2011 and 2016 will equal about 30%. Much higher annual rates of growth than these reported for the market as a whole will be realized in the emerging markets of China, India, Russia, and Brazil (commonly referred to as the BRIC) which will move up the ranks of the largest food retailing nations in the world. In fact, with annual sales of $914 billion in 2011, China has overtaken the United States (annual sales $887 billion in 2011) as the world's largest food and grocery retail market, according IGD, a market research firm. All the BRIC countries will be in the top five grocery markets by 2015.

While the overall world grocery market continues to grow at moderate rates, several new trends are emerging. Food Marketing Institute and Booz & Company see value-seeking as “a (new) way of life.” Consumer cost-cutting, in general, has become a “new normal,” as consumers seek “private labels, less expensive foods, shop around for deals, make fewer trips to stores, and buy fewer items.” Grocery buyers are also flocking to the Internet to find value (deals, coupons, etc.), along helping to boost online grocery sales. Some speculate that the advent of the smartphone has facilitated growth in online shopping.

Food retailers have been in touch with these new trends and are making moves in regard to international expansions and consolidations as well as online sales. For instance, Ahold (Euronext Amsterdam: AH) (OTC: AHONY), the Dutch grocery retailer with some $620 million in online grocery sales through its U.S.-based Peapod.com website and the Netherlands-based Albert.nl, is planning to triple sales from these websites by 2015. Later this year, the company will be the first retailer in Holland to launch a “click and collect” Internet shopping service in its Albert Heijn stores. The expansionist online strategy comes at the time when the company's CEO Boer sees “a challenging year for the food retail industry,” with “consumers continuing to look for value and competition remaining intense.” The company is a dividend payer: it yields 4.1%.

The Internet sales presence of other food retailers is also expanding. Tesco PLC (LSE: TSCO), the world's third largest grocery retailer by sales and one of Warren Buffett's key retail investments, expects to double its online grocery revenue within five years to $8.5 billion. For the market as a whole, online grocery sales in the UK are expected to triple by 2014 to $31 billion from the 2009 levels. Tesco will certainly hold the majority share in that volume. In addition, Tesco has been increasing its foothold in international markets, including Indiaand China. The company pays a fat dividend yield of 4.7%. Its shares have dived 23% in a year and currently trade at an attractive PE ratio of 8.7 times. 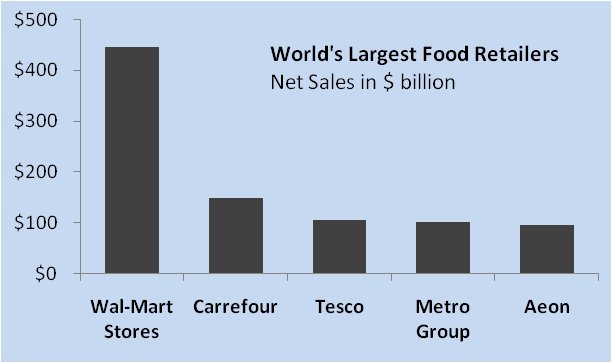 The world's largest grocery retailer, Wal-Mart Stores (NYSE: WMT), is also eyeing new international mergers and acquisitions in an effort to bolster growth. Wal-Mart International is the company's growth engine, with sales expanding 11.5% per year. It already has a large international exposure with 4,500 stores in 15 nations including India and China. Wal-Mart is the fourth largest retailer in China, and competes in that market directly with Carrefour and Tesco. The company has just agreed to acquire South Africa Massmart's 288 stores in Africa, and is setting up office in UK to look for potential acquisitions on the European continent. When it comes to online sales, no other company beats Wal-Mart. The company has just celebrated the opening of its first store 50 years ago. Its stock is trading at a new 52-week high, boasting a dividend yield of 2.2%.

Several other food retail players have had notable activity in the international arena. Carrefour SA (Euronext Paris: CA), the world's second largest food retailer, has just acquired 129 EKI stores in Argentina, pending approval by the nation's regulatory bodies. The company has plans to exit a joint venture in Greece. It pays a dividend yield of 3.9%. Its stock is down 38% in a year. Casino Guichard Perrachon SA (Euronext Paris: CO) (OTC: CGUIF) has taken control of Brazil's largest retailer, Pão de Açúcar, moving in market share in the nation ahead of competitors Wal-Mart and Carrefour. For the reference, according to IGD, Brazil's grocery market, the world's fifth largest, will grow 35% in market value by 2015 (to $462 billion), while the U.S. market will expand at half that rate. Groupe Casino is another dividend payer, with a dividend yield of 2.2%. The world's fourth largest food retailer, Germany's Metro Group AG (DAX: MEO) has recently exited UK, selling its Makro UK to competitor Booker. Metro Group pays a lucrative dividend yield of 6.2%. Its stock has dropped 47% within one year. The company has a P/E of 14.3, below its industry on average.

Update 30 Jan 2015: AB Acquisition LLC and Safeway announced today that they have completed their proposed merger. Under the terms of the merger agreement first announced and unanimously approved by Safeway's Board of Directors in March 2014, AB Acquisition LLC, the owner of Albertson's LLC and New Albertson's, Inc. (collectively "Albertsons"), will acquire all outstanding shares of Safeway.

While the market environment will remain difficult for most industry players in the near term, investors should focus on the long-term opportunities with sustainable value-creating food retailers. Companies with the potential to grow earnings and dividends and to avoid volatility and cyclicality should be most appealing.

Dividend income accounts for about two-thirds of total returns, or the actual rate of return taking into account both capital and income appreciation. Given that share prices are often volatile and unpredictable, the potential for plump dividends can give shareholders much-needed peace of mind for decent returns. I am currently looking at the dividend prospects of Tesco (LSE: TSCO) (NASDAQOTH: TSCDY) and assessing whether the company is an appetizing pick for income investors. How... Read more

Where Next for Tesco's Dividend?

Many investors focus on earnings per share when judging a company's performance. However, earnings can be manipulated and adjusted in all sorts of ways, meaning they don't tell you a lot about how much spare cash a company has generated. Similarly, since dividend cover is calculated using earnings, a good level of dividend cover doesn't necessarily mean the payout is actually being funded from a company's profits. A company's cash flow can tell you a lot about a firm's financial health.... Read more

A Warning for Sainsbury's Future Dividends

LONDON -- The shock profit warning from FTSE 100 (INDEX: ^FTSE) supermarket titan Tesco (OTC: TSCDY) in January continues to preoccupy many investors. Has U.S. investment legend Warren Buffett got it right in buying more shares in the world's third-largest retailer? Or has U.K. master investor Neil Woodford made the correct call in selling his entire holding in the company? Let's give Tesco a rest, at least for a minute, and turn the spotlight on one of its U.K. rivals, J Sainsbury... Read more