In 2015, the sales of automobiles in the U.S. have peaked at historic levels, setting a sales record of nearly 17.5 million vehicles, a 5.7% growth compared to the previous milestone of 17.4 million vehicles in 2000. In spite of the turbulent macroeconomic environment globally, the trend suggests improved margins, strong leverage in multiple regions globally and new capital investments. Through 2018, U.S. sales of vehicles are expected to be in line due to higher interest rates and an anticipated increase in the used cars.
This article discusses a small-cap and two mid-cap companies trading in the Automotive industry. Over the past 6 months, all three stocks performed great, suggesting high investor confidence and an upward trend. Their average debt-to-equity ratio is 0.27, indicating financially healthy companies with effective debt management, whereas their average beta 1.43 makes up for a safe investment. All three companies yield 1.73% on average, which is higher than the average yield 1.61% of the industry. Similarly, their average payout ratio of 28% is higher than the average payout ratio 15.2% of the Auto & Truck Manufacturers industry. 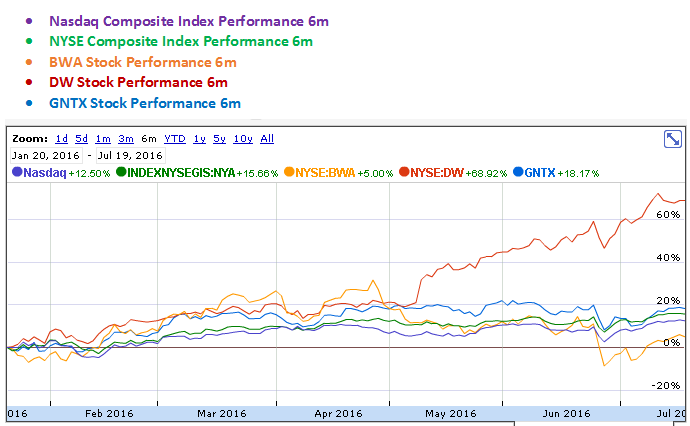 BorgWarner (NYSE: BWA) is an Auburn Hills, Michigan-based leading supplier of highly engineered components and systems, primarily used in powertrain applications in the automotive industry. BorgWarner services one-third of the automotive market with Daimler, Ford and Volkswagen, and offers its products through its Engine and Drivetrain segments to original equipment manufacturers (OEMs) and tier one vehicle systems suppliers and the aftermarket for light, commercial, and off-highway vehicles.

Q1 2016 Results: In the first quarter of 2016, BorgWarner delivered good results. The challenging first half of 2015 has forced the company to adjust its sales and earnings projections. Nevertheless, the management expects to sustain strong operating margins and strong cash flows for the rest of 2016. Compared to Q1 2015, BorgWarner Q1 2016 results are as follows:

2016 Outlook: For 2016, BorgWarner is expected to capitalize on the benefits of clean air legislation and increased demand for fuel efficiency. The company is specialized in the field, offering a highly innovative technology, which makes it competitive on a global scale. Revenue projections estimate a 10% average growth through 2017. Analysts estimate an average EPS of $3.51 through 2018, up 32.0% from current EPS $2.66 and an average earnings growth of 11% annually through 2020.

Q1 2016 Results: In the first quarter of 2016, Drew Industries delivered solid earnings growth with revenues reaching $422.8 million, up 17.0% YoY from $361.5 million in Q1 2015 due to increased wholesale shipments for total RVs and motorhomes and acquisitions – Marine Furniture business in January and RV Furniture Business in February. In addition, the company’s non-towable RV OEM sales have exceeded 33% of total revenues, thus driving margin performance, but also helping diversify the company and the markets outside RV. Gross profit margin grew 21.3% YoY to 25.6% from 21.1%. Total operating expenses reached $367.1 million from $329.6 million, an 11.4% YoY increase. Operating income grew 75.0% to $55.7 million from $31.8 million and net income reached $36.0 million, up 79.2% YoY from $20.1 million in the same quarter last year. Operating cash flow skyrocketed to $43.5 million from $7.1 million, a 510.2% YoY increase.

Dividend Strength & Outlook: On May 26, Drew Industries declared a quarterly dividend of $0.3 per share, thereby reaching an annualized dividend of $1.20 per share. The dividend yield is 1.33% at a payout ratio of 33%. The company is expected to sustain growth by capitalizing on consumer demand for RVs and seeking new product choices.
Through 2018, analyst consensus estimates an average EPS of $4.82, up 31.9% from current EPS $3.65, whereas dividend per share is expected in line.


Gentex (Nasdaq: GNTX) is a Zeeland, Michigan-headquartered diversified manufacturing company that engages in the design, development, manufacturing and sale of automotive automatic-dimming rearview mirrors, automotive electronics, dimmable aircraft windows, and fire protection products. Gentex serves the automotive, aviation and fire protection industries internationally, offering automotive products and automotive electronics for a range of vehicles as well as photoelectric smoke detectors and alarms for use in fire detection systems in commercial and residential establishments.

Dividend Policy & Outlook: On May 19, Gentex declared a quarterly dividend of $0.09 per share, thereby reaching an annualized dividend of $0.36 per share. The dividend yield is 2.24% at a payout ratio of 33%. In addition, the dividend growth since 2015 is 12.5%. In the first quarter of 2016, Gentex repurchased 3.1 million shares of its common stock and has approximately 6.4 million shares remaining available for repurchase based on its share repurchase plan. For 2016, Gentex plans to continue the repurchase of additional shares as long as market trends and macroeconomic stability allows it.
Through 2018, analysts estimate an average EPS of $1.29, up 17.6% from current EPS $1.10, whereas dividend per share is expected in line. Average earnings growth is estimated at 10.44% annually through 2020.

Magna International: This 3.9%-Yielding Stock Should Have Enough Liquidity To Weather The Storm

Magna is a global leading supplier of auto components.The outbreak of COVID-19 may significantly reduce the demand for its products in 2020 and 2021.However, Magna should have enough liquidity to help it weather the storm.The company is trading at an attractive valuation.Investment Thesis Magna International (MGA) is facing significantly uncertainties due to the outbreak of COVID-19. Although many of its manufacturing facilities have returned to fully operational or are... Read more