Is It Time To Get In On Blue Chip Dividend Plays?

The blue chip Dow stocks led last falls rally, beating out the S&P 500 and the Nasdaq by several percentage points. The safety and dividends offered by the worlds largest companies were an attractive haven for investors growing wary of impending global slowdown. When comparing the major indexes by dividend yield, it is easy to see why the Dow performed better than its counterparts. 100% of the Dow stocks pay a dividend with an average yield of around 3% and a range of 1-5%. Of the S&P 500, about 81% of stocks pay dividends with an average yield near 2% and the dividend yields are even lower on the Nasdaq.

This year is shaping up to be much like last, with concern over world growth and weak corporate outlooks weighing heavily on the markets. Reduced earnings and diminishing expectations of accelerated growth in the second half give little reason for the general markets to move higher. With little expectations for a second half bull market, dividends will emerge as an important factor for investors. Is now the time to get in?

Alcoa (NYSE: AA), often viewed as an economic bell-weather, kicked off the second quarter earnings season earlier this week. The company reported an 81% drop in earnings over the previous quarter, beating the streets estimates but yet still stunning investors. The stock dropped about 3% following the announcement and could continue its decline. The company stated that falling aluminum prices, over supply and a rapidly slowing world economy, especially in China, will curb revenue and profitability in the second half. 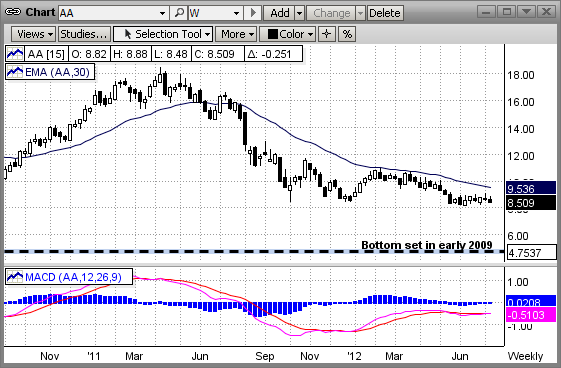 The stock is approaching the lows it set following the 2008 market sell-off. The stock has lost over 46% in the last year and 2.5% in the year-to-date period but still has another 40% fall from the current level before reaching that point. Will it fall that far? No, probably not. The bearish momentum in the stock is declining and it is oversold, trading near a more recent support zone. The stock currently yields about 1.4% and could increase to over 2% should Alcoa continue down to its long term support.

McDonald's (NYSE: MCD) is another Dow dividend play that has benefited from a weakening global outlook. The stock has moved down over 10% for the year based on slowing sales growth and weak global outlook. The company has been able to sustain growth this year in line with expectations. Global comparable sales, which fell from 7.5% in April to 3.5% in May and June, remain positive and at a rate comparable to last years average of 5.5%. The company has reported sales growth in the US, Asia and Europe with Asia lagging at 1.7%. Unfortunately for the share price, McDonald's could be suffering from misplaced bearishness because the company has a proven track record of growth and dividend increases. Alcoa, whose dividend has increased due to lower stock prices, has not increased its dividend since 2002. 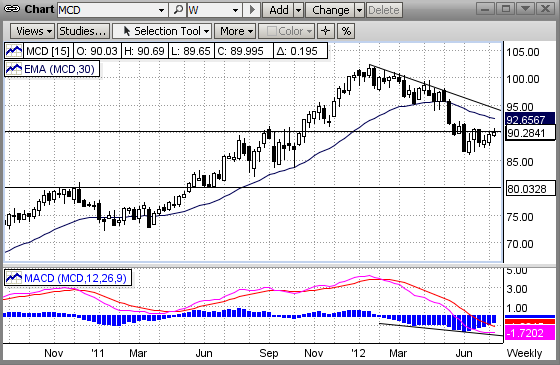 McDonald's is scheduled to release second quarter earnings July 23 and could surprise the markets. The current expectations are for earnings per share in the range of $1.38, compared to an actual EPS for the same period last year of $1.35 and the previous quarter this year of $1.23. The stock is currently trading under resistance and could move lower on global economic news prior to the release. At the current level, near $90, the stock yields around 3.1%, a number that could increase to as much as 3.5% if the stock moves down to it's next support zone around $80.

The blue chips as a whole are a good place for dividend returns, but not all are equal. Investors should not focus too heavily on individual quarterly earnings but should look to long term trends in revenue and earnings for clues. Sustained growth of revenues and earnings trump cyclical growth and fit better in long term investment strategies. Alcoa will surely bounce back when the world economy turns, but when that will be is still in question. McDonald's is head and shoulders above Alcoa in this light and makes a better long term dividend investment. Waiting until after earnings season could be a prudent move and could provide a better yield.

MCD Stock Could Be Something Special Earnings season can be an exciting time for investors because of all the big moves. But for that very reason, trading shares around earnings time can carry a substantial amount of risk. For instance, a company can release a perfectly good earnings report and its stock can still tumble on the news. McDonald’s Corp (NYSE: MCD) just demonstrated that point again. On July 28, McDonald’s announced its financial results for the second quarter of 2021.... Read more

A Top Dividend Stock You Likely Haven’t Considered In the world of dividend stocks, few companies have served investors better than Automatic Data Processing Inc (NASDAQ: ADP), also known as ADP. Consider this: in November 2020, the company’s board of directors approved a 2.2% increase to ADP stock’s annual dividend rate to $3.72 per share, marking Automatic Data Processing stock’s 46th consecutive annual dividend increase. The dividend will be paid in quarterly installments of... Read more

Don’t Ignore MCD Stock Among the numerous industries impacted by the COVID-19 pandemic, few took as big a hit as restaurants. In some regions, indoor dining was flat-out banned for a substantial period last year. And because many restaurants could not survive on takeout alone, some owners had no choice but to shut down for good. Yet one restaurant chain has turned out to be extremely resilient: McDonald’s Corp (NYSE: MCD). McDonald’s is one of the largest restaurant chains in the... Read more

Rising Dividends From an Unlikely Industry It’s no secret that in today’s extraordinary environment, restaurants have not been doing very well. At the onset of the COVID-19 pandemic, many local governments imposed lockdowns, meaning numerous restaurants had to close. And even after the lockdowns were lifted, business hasn’t been the same. In some areas, restaurants still aren’t allowed to have customers eat inside. And most of the restaurants that are allowed to open their dining... Read more