Digging For Dividends Among Regional Banks

Regional financial banks can be good sources of steady dividends. It is not uncommon to find yields in excess of 4%, far above the yields of t-bills and bonds. When looking in the sector you must look beyond the big names in the group in order to find the real gems. Banks like US Bancorp (NYSE: USB) and Fifth Third Bancorp (Nasdaq: FITB), which were paying nice dividend yield percentages last year, are not paying the same now. They have not reduced dividend size, but their popularity has sent the stock price up, reducing yield percentage. US Bancorp, the largest regional bank on this list by market cap, is only yielding around 2.3% at this time, down from 2.6% two months ago and 3.55% last year.

Digging a little deeper into the sector we'll find banks like New York Community Bancorp (NYSE: NYCB). This little bank operates in New York City, Long Island and other outlying areas including parts of upper New Jersey. The bank provides loans for multi-family units and other real estate through a network of savings and loan branches. The banks' stock is trading around 11.5 times earnings and pays an annual dividend of $1.00, one of the highest on this list by dollar and percentage, which is around 7.85% at this time. 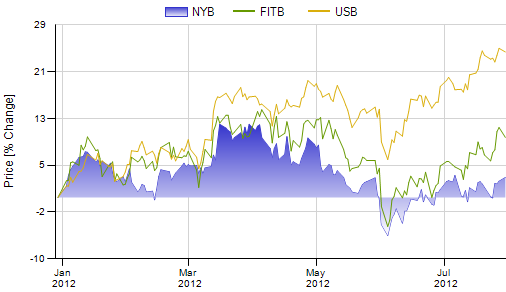 People's United Financial (Nasdaq: PBCT) is a diversified financial institution, offering consumer and commercial banking as well as insurance, trust and other financial services. This bank operates throughout New England and has a market cap of $5.6 billion, even smaller than FITB and NYB. This stock, though over valued when compared to the rest of the group, has a P/E of 15.92 and also one of the highest yields, perhaps making the higher perceived value a null point. The current annual dividend payment is $0.64 per share, a yield of 5.82%.

The focus now turns to another small bank which operates in Northern New Jersey, Valley National Bancorp (NYSE: VLY). The bank has been making steady revenue but is not expected to increase earnings significantly going into next year. In fact, the short ratio (22%) suggests that there are expectations for this bank to disappoint investors with its future revenue and earnings, despite its most recent statement which reported solid revenue and loan growth. This stock pays $0.65 annually, yielding around 6.86% at the current prices. The yield percent could go higher if the shorts depress the price of the stock even further. A move down would make the price a little nicer too, putting it back at a P/E comparable to Fifth Third Bancorp. The stock currently trades about 12.6 times earnings.

United Bankshares (Nasdaq: UBSI) is the smallest bank on this list by market cap. On the flip side, the stock has one of the highest prices and the highest yields by dollar amount. UBSI pays a massive $1.24 per share compared to the next highest payer, New York Community Bank with $1.00 per share. On a valuation basis the stock is at the top of the range for the group, trading around 14.37 times earnings. Despite the relative high price the stock still yields over 5%. This bank also reported an increase in earnings recently but is trading lower under the pressure of a 24% short ratio. The short selling could provide entry points with even better dividend yields than last week and last month.