Stocks in the cyclical industrial sector fare well when the economy enters an expansionary cycle. While the global economy is currently moving through a soft patch, a rebound in the economic activity expected after the resolution of the European sovereign debt crisis and re-acceleration of growth in the United States and China will bode well for the cyclical industrial stocks. Companies selling gases for industrial uses stand to benefit from the expected new trend. Although industrial gas companies are cyclical by nature, some of their business customers, such as food and healthcare services companies, are shielded from cyclicality. The biggest industrial gas players thus have stable revenue streams (and cash flows) based on long-term contracts with a broad range of clients, which enables gas companies to pay attractive dividends and makes them defensive income investments.

One of the industrial gases companies paying dividends is Praxair (NYSE: PX). The company is the largest industrial gases company in North and South America. It produces atmospheric gases, such as oxygen, nitrogen, and rare gases, and process gases, including carbon dioxide, helium, hydrogen, specialty gases, and acetylene. Praxair's dividend is yielding 2.0% annually on a payout ratio of 39%. Over the past five years, the company's EPS and dividends increased at average annual rates of 12.7% and 13.3% per year, respectively. Analysts forecast that the company's EPS will rise at an average rate of nearly 11% per year for the next five years. This bodes well for future dividend hikes. The company has a price-earnings ratio (P/E) of 19.2 times its trailing earnings, which is a premium to Praxair's peer group on average but slightly below the company's five-year average ratio. The stock appears pricey relative to its industry based on other valuation metrics, such as the price-to-book value ratio and price-to-sales ratio. 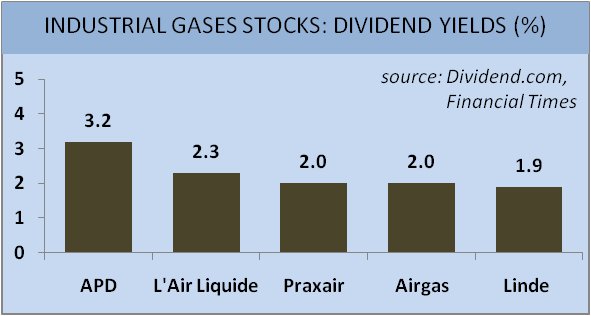 Air Products & Chemicals (NYSE: APD) offers a higher dividend yield of 3.2% on a payout ratio of 46%. In fact, APD has the highest dividend yield of the featured stocks and is known as a dividend aristocrat, a stock that has paid dividends for at least 25 consecutive years. In APD's case, the company has paid dividends since 1954 and has raised them for 30 years in a row. This $18-billion producer of atmospheric and process gases also has a large chemicals component, which makes it a more diversified industrial play. It is also the world's largest producer and supplier of liquid and gaseous helium. Given the dwindling supplies of helium and the favorable price dynamics, the stock stands to benefit from the rising demand meeting limited supplies of the gas. Over the past five years, the company's EPS and dividends grew at average rates of more than 11% per year. Given that APD's EPS is expected to expand at an average rate of 9.1% per year for the next five years, further dividend increases could be expected in the future. The stock is less pricey than Praxair's, as its P/E of 15.1 is below its respective industry ratio of 16.5.

Airgas (NYSE: ARG) is also an industrial gas stock. It pays a dividend yield of 2.0%. Its payout ratio is low at 38%. Despite its comparably lower yield, Airgas has been an attractive dividend growth stock. Over the past 10 years, Airgas has increased its dividend 12 times. Its dividend hikes averaged 21% over the same period. This year, the company boosted its dividend by an even higher 25% rate. Over the past five years, however, dividend growth averaged a spectacular 35% per year. In terms of valuation, the stock is more expensive than its respective industry on average, as the stock's P/E hovers around 19.3, while the industry's stands at 16.5. The Airgas stock currently has a price-to-book ratio above that for the industry on average. The stock is up 34% over the past 12 months.

L'Air Liquide (PAR: AI.F)(OTCBB: AIQUY) is a $40-billion, France-based atmospheric, process, and medical gases producer. By market cap, it is the world's largest industrial gases company. It pays a dividend yield of 2.3% on a payout ratio of 46%. The company's EPS grew, on average, at a rate of 9% per year over the past five years. Dividend per share growth has been in-line with the industry average relative to its peers. On a P/E basis, the stock is trading at a slight premium to its industry; however, its P/E is on par with the stock's average ratio for the past five years. The stock is up 24% over the past year.

The Linde Group (XET: LIN.DE)(OTCBB: LNEGY) is the world's second largest industrial gases producer. This company with a market cap of $32 billion sells compressed and liquefied gases, as well as chemicals for various industries. Its gases are used in the energy sector, steel industry, chemical processing, glass production and electronics, environmental protection, and food processing. The company has been in existence since 1879. It currently pays a dividend yield of 1.9% on a low payout ratio of 36%. Over the past year, the company's EPS and dividends grew at rates of 16.40% and 13.64%, respectively. Based on a five-year annualized metrics, The Linde Group's dividend growth ranked among the highest relative to its industry peers. Currently, the stock has a P/E of 18.7, above the industry average, but below the stock's five-year average ratio. Unlike most of its peers, based on a price-to-book ratio, the stock is valued below its respective industry.

These five companies control some 75% of the overall market for industrial gases. The expected boost from the cyclical rebound and the future growth based on the expansion of gas uses in new technologies bode well for a continued strong performance of these dividend plays.