The pharmaceutical industry has bright prospects for the future. Given the aging populations around the world, spending on prescription medications is set to grow rapidly over the next several decades. For the reference, the pace of growth in medication spending per senior person increased more than five-fold between 1992 and 2010, according to the PRIME Institute for Families USA (see chart below). The pace of spending increases is likely to be sustained going forward. This trend bodes well for the pharmaceutical majors, including those that generate substantial cash flows and pay attractive dividends. 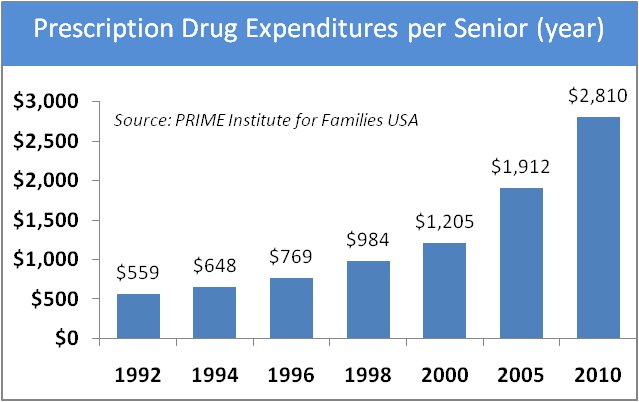 Until recently, many investors avoided investing in Big Pharma companies because of the companies’ revenue losses due to expiring patents for several blockbuster drugs, including, for instance, Pfizer’s Lipitor, Sanofi and Bristol-Myers Squibb’s Plavix, and Merck & Co.’s Singulair. Fearing the lack of new drugs in the pipelines to substitute for the lost revenue, investors have been reluctant to invest in these companies, depressing the Big Pharma valuations. Now, however, the tide has turned in favor of the pharmaceutical industry, with investors bidding up stock prices and, hence, boosting valuations. The defensive nature of the pharmaceutical stock has also been a driver of the demand in recent months.

Despite the recent stock price rally, income investors can find attractive dividend plays among the major U.S. and European drug companies. Most Big Pharma majors pay dividend yields in the range between 3.5% and 4.0%, more than double the yield on the 10-year Treasury bond and well above the dividend yield on the S&P 500. For example, Pfizer (NYSE: PFE), which has rallied nearly 16% this year to date, has a dividend yield of 3.5%, while its rival Merck & Co. (NYSE: MRK), which is up 20% year-to-date, has a yield of 3.7%. Among the Big Pharma majors, the UK-based GlaxoSmithKline (LSE: GSK)(NYSE: GSK) has the highest yield of 4.6%, while Swiss-based Novartis (VTX: NOVN)(NYSE: NVS) and Eli Lilly & Co. (LSE: LEL)(NYSE: LLY) also pay high yields of 4.1% each.

All the Big Pharma dividend-paying companies generate sufficient cash flows to accommodate their dividends, while some have been known as robust dividend growth stocks. For example, Novartis boosted its dividend at an average rate of 17.7% per year over the past five years. This pace of growth will moderate in the future, as EPS growth is set to decelerate and the company’s dividend payout ratio stands at 70%. Many others have raised dividends at rates below 5% per year over the past five years, which is a pace of dividend growth likely to be sustained in the future.

Still, several dividend-paying stocks are well positioned for growth in the future, which could provide more room for revenue and earnings growth as well as for cash flow generation and higher dividends. Expecting that the majority of the industry growth will originate from the developing markets, drug companies with a large developing market exposure are likely to fare well. One example is Sanofi (PAR: SAN)(NYSE: SNY), which generates more than 30% of revenues in the developing world. The company is expected to lead in the insulin market with its Lantus. It also has a decent pipeline of new products, including drugs for prostate and breast cancers. Sanofi pays a dividend yield of 3.9% on a payout ratio of 54%. It has been growing dividends at an average annual rate of 3.7% over the past five years.

Novartis is a diversified player, deriving a large share of revenues from consumer-health businesses. Novartis has a small number of patent expirations for the next several years and it has a generally broad product mix. Its new product pipeline is promising, including drugs for multiple sclerosis and meningitis. Its EPS growth will average 1.4% per year for the next five years.

Speaking of EPS growth: EPS growth is likely to be above the average of the Big Pharma for GlaxoSmithKline, which will see its EPS expand at a rate of 5.4% per year for the next five years. Johnson & Johnson (NYSE: JNJ), which is paying a dividend yield of 3.5%, is expected to see an EPS growth rate averaging 6.7% per year for the next half decade. Merck & Co.’s EPS growth will average about 4.6% per year over the same period. Abbott Laboratories (NYSE: ABT), which is yielding a low 3% and is expected to split into two companies by the end of this year, will expand its EPS at an average annual rate of 8.5% over the next five years. The company is not facing a patent expiration cliff and it has strong in-line products.

A stock that is likely ahead of the bunch in the cancer market is the Swiss Roche Holdings (VTX: ROG)(OTCBB: RHHBY). The stock is yielding 3.9% on a payout ratio of 70%. Roche’s acquisition of Genentech has made this pharmaceutical giant a leader in the cancer drug market. Given the pace of growth in the biotech sector and Genentech’s robust line of products, Roche is likely to see a stronger demand in the future from the rising prevalence of cancer in the aging populations around the world.

As regards valuations, the overall industry is now priced almost in line with the S&P 500. Several stocks have below-industry P/Es, including Pfizer, trading at almost half the industry valuation, and Merck & Co., trading at a higher valuation than Pfizer’s but still at a deep discount to the overall industry. Abbott Laboratories and Bristol-Myers Squibb are trading higher than Pfizer and Merck & Co. AstraZeneca (LSE: AZN)(NYSE: AZN), which has just canceled its share buyback program, trades at a single-digit P/E, below most industry peers, due to the company’s struggles with patent cliffs and setbacks in terms of drug pipelines.

Dividend income accounts for around two-thirds of total returns, the actual rate of return taking into account both capital and income appreciation. Given that share prices are often volatile and unpredictable, the potential for plump dividends can give shareholders much-needed peace of mind for decent returns. I am currently looking at the dividend prospects ofGlaxoSmithKline (LSE: GSK) (NYSE: GSK) and assessing whether the company is an appetising pick for income investors. How... Read more

The shares of GlaxoSmithKline (LSE: GSK) (NYSE: GSK) were flat at 1,676 pence early this afternoon after the FTSE pharmaceutical giant lifted its first-quarter dividend by 6%. Glaxo declared a dividend of 18 pence per share for the quarter, compared to 17 pence per share last year. The company reported sales had declined 2% to 6.4 billion pounds during January, February and March, which reflected the disposal of 17 over-the-counter products since last year. Quarterly profits dropped... Read more

The shares of GlaxoSmithKline (LSE: GSK.L) (NYSE: GSK) slid 9 pence to 1,411 pence during lunchtime London trade today despite the pharmaceutical group announcing a 6% lift to its quarterly dividend. Within its third-quarter statement, the FTSE 100 member said core earnings for July, August, and September had come in at 26.5 pence per share, down 13% on last year and matching the group's second-quarter effort. In addition, Glaxo noted the first nine months of the year had seen core... Read more