Dividend Opportunities in the Defense Sector, Despite Budgetary Austerity

U.S. defense budget (see chart below) will shrink in the coming years, with some $487 billion in cuts already planned for the next decade. According to the Pentagon, “U.S. defense spending in 2012 will total $612 billion, down slightly from 2010’s $691-billion peak” due to lower spending on the Iraqi and Afghan wars. The Pentagon budget excluding the cost of these wars is $531 billion in 2012. In the current fiscal year, which started on October 1, that core budget will slip to $525 billion. The so-much-feared sequestration, a process of automatic across-the-board budget cuts, scheduled for January 2, 2013, would trim about 11% from the Pentagon’s spending, according to estimates cited by Reuters. 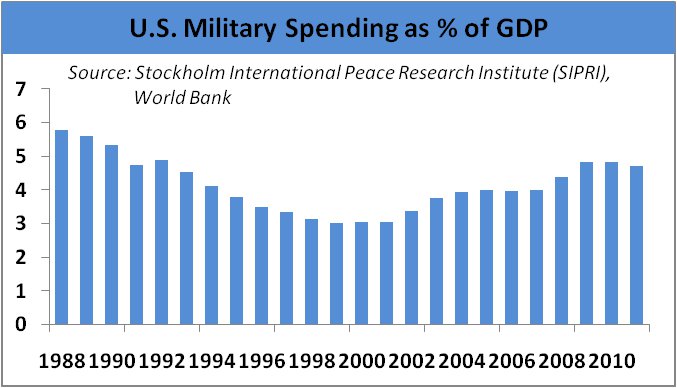 The lower government spending spells trouble for a number of U.S. defense contractors. While some contractors have started to lay off workers and idle facilities, others are bracing for the impact, alerting it could be devastating. Still, despite all the gloom and doom in the sector, many defense-related companies are likely to weather the storm and to reposition themselves in line with the new realities. Notwithstanding the river of red ink splashing over the defense budgets, a number of defense-related stocks represent good value and income plays. In fact, most of the largest players in the sector and related industries are high-quality stocks, showing sustainable earnings power and stability of dividend payouts and growth over long-term horizons.

Let’s take a look at Lockheed Martin (NYSE: LMT). This high-yielder boasts a dividend yield of 4.9%, after increasing its dividend by 15% in late September. The stock’s payout ratio is now 47%. Over the past five years, Lockheed Martin boosted its dividend at an average rate of nearly 23.3% per year. Despite the budgetary cuts planed for the next five years, the company’s EPS is forecast to accelerate from the average rate of 6.3% per year to 7.2% per year for the next five years. The stock has a forward P/E of 11.9x, below that of the aerospace industry at 14.1x, but above the defense industry’s at 10.6x. The stock, which has an exceptionally high return on equity of 102%, is also popular among hedge fund investors, with value investor Jean-Marie Eveillard owning nearly $345 million in the stock.

Another company with a large share of revenues from the defense sector that is expected to see faster EPS growth in the coming years is conglomerate United Technologies (NYSE: UTX). United Technologies is forecast to boost its average annual rate of EPS growth to 11.5% for the next five years from 8.2% per year realized, on average, over the past five years. The company is a good dividend growth stock, posting average dividend growth of 12% per year over the past half decade. The stock’s forward P/E is 14.4x, trading at a small premium to the aerospace industry’s ratio but above that for the defense industry. Currently, the stock is yielding 2.8% on a payout ratio of 45%. The stock has a ROE of 23%. Among other things, the company produces aerospace products and manufactures military and commercial helicopters, as well as aircraft parts and services.

Other potential high-quality defense-related stocks paying attractive dividends include Raytheon (NYSE: RTN), Northrop Grumman (NYSE: NOC) and General Dynamics (NYSE: GD). All these stocks will see lower EPS growth, on average, over the next five years. However, that growth will still be positive and higher than the forecast rates of U.S. GDP growth. Raytheon is currently yielding 3.6%, two percentage points more than the 10-year Treasury bond. The stock has a beta of 0.8, which implies lower volatility than that for the broader market. Raytheon has boosted its dividend at high rates, averaging about 14% per year over the past five years. Given that its dividend payout ratio is low at 35%, future dividend hikes are likely. The company’s forward P/E of 10.4x is about on par with that of the defense industry. Raytheon is the world’s sixth largest military contractor, which makes high-tech missiles, advanced radar systems, defense electronics and missile-defense systems.

Northrop Grumman is a maker of aircrafts, spacecrafts, high-energy laser systems, intelligence and reconnaissance systems. The stock is yielding 3.2% on a low payout ratio of 28%. Over the past five years, the company boosted its dividend at an average rate of 8.3%. The company was just awarded a $108-million contract to update the Air Force’s fleet of B-2 stealth bombers. Given the company’s low payout ratio and continued EPS growth, dividends are likely to continue to grow in the future. Northrop Grumman has a relatively low debt-to-equity ratio and a high free cash flow yield of 12.4%. The stock has a forward P/E of 10.0x, slightly below that of the defense industry. Value investor Jean-Marie Eveillard, who owns $423 million in this stock, is also bullish about Northrop Grumman

General Dynamics has raised dividends for straight 21 years. The stock is currently yielding 3.1% on a low payout ratio of 30%. Its yield is almost double that of the 10-year Treasury bond and 50% higher than the yield on the S&P 500 index. General Dynamics is not expected to see a notable drop in its EPS growth, so its future dividend growth, amid a low payout ratio, is likely assured. For the reference, the stock grew its dividends at an average rate of 12.7% per year over the past five years. The company has just received an order for the purchase of two-channel digital radios for infantry rucksacks and vehicles worth an estimated $250 million. As regards its valuation, the stock has a forward P/E of 9.1x, below the defense industry’s ratio. Like its peer Northrop Grumman, the stock has a low debt-to-equity ratio and a high free cash flow yield of 9.3%. It is worth noting that this stock has a seal of approval from legendary investor Warren Buffett.

The overall impact from the expected defense budget cuts on the aforementioned stocks is likely limited. However, the outlook for defense stocks could improve in the unlikely case the Republican Presidential candidate, Mitt Romney, wins the U.S. Presidency. Despite his intentions to boost military spending, Romney would quickly face the reality of widening budget deficits and the pressure from the fiscal conservatives in favor of austerity.