Is It Time To Move into US Bank Dividends?

The Chairman and CEO of BlackRock (NYSE: BLK), Larry Fink, was recently quoted as saying that he is bullish about U.S. banks. Until recently, many investors shied away from banking stocks due to fears of contagion associated with the EU banking and sovereign debt crises and concerns about the impact on the industry from the recent JPMorgan Chase & Co. (NYSE: JPM) loss on a botched derivatives trade. Now, while concerns remain about tight interest-rate spreads due to the Fed's continued low interest-rate policy, the rebound in the housing market, improving credit quality, and a higher demand for commercial and industrial (C&I) loans are making some banking industry stocks attractive investments. Investors should particularly consider several dividend-paying banking stocks as growth and income plays. 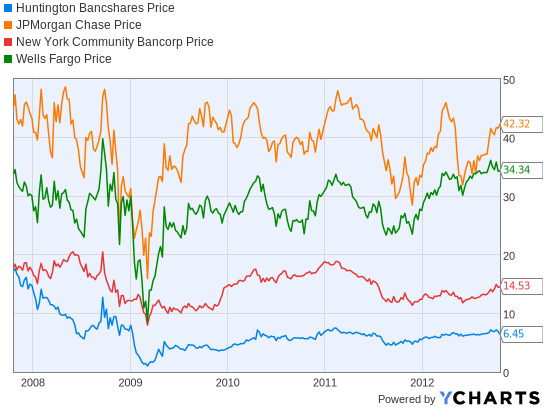 For example, JPMorgan's stock was pummeled after announcements about an escalating loss of as much as $6.25 billion on a single trade in the derivatives market. However, the bank's stock has since recovered most of the losses, as investors have regained the confidence in the limited impact of the risk trade on the bank's reputation, industry position, and income statement. Now, the bank has delivered spectacular financial performance in its third quarter, with net income climbing to record $5.7 billion ($1.40 per share), up 34% year-over-year, and beating analyst estimates. A surge in mortgage lending was the major contributor to the stellar quarterly performance.

JPMorgan is the largest U.S. bank by assets, a too-big-to-fail bank, and a global systemically important financial institution. The bank is fairly well capitalized. Its stock is the fourth most widely-held stock by hedge funds. Among highly reputed investors, both John Paulson and Ken Fisher hold large stakes in this stock. JPMorgan is currently yielding 2.8% on a low payout ratio of 25%. The bank is expected to accelerate its EPS growth in the next five years (EPS is forecast to grow at a rate of 7.2% per year for the next five years compared to an average rate of 3.3% per year over the past five years). The bank is trading below book value, although slightly above the banking industry on average. Its return on equity (ROE) is close to 10%.

While JPMorgan's third quarter performance was buoyed by the higher mortgage demand, the real winner from the housing market rebound is another large U.S. bank, Wells Fargo & Co. (NYSE: WFC). This bank is the largest mortgage originator in the United States. It reported $4.9 billion in net income for the third quarter, up 22% from the year-earlier levels, driven by strong mortgage business. Although its net interest margin compressed further in the past quarter, the bank is expecting further gains as the U.S. housing market continues to recover, amid the expectation of more low interest and mortgage rates in the future. This bank is also one of the best capitalized financial institutions in the United States. It pays a dividend yield of 2.6% on a low payout ratio of 28%. The bank's shares are trading at a premium to book value. The bank boasts a ROE of 12.7%.

A particular opportunity for growth and value investment exists in select regional banking stocks. Banks in the Midwestern and Southwestern regions of the United States are seeing especially robust growth in C&I lending. Midwestern banks have benefited from the economic growth driven by manufacturing and export-oriented businesses. Another factor that has contributed to strong performance and outlooks of the regional banks in the Midwestern region is the expansion in the natural gas fracking industry associated with the Utica and Marcellus Shales. In addition to credit growth, the Midwestern region is showing improved credit quality, which means provisions for loan losses can be trimmed.

An example of a potentially good investment in the regional banking sector is Huntington Bancshares (Nasdaq: HBAN). The bank saw its third-quarter revenues rise 4% and EPS expand 17% from the year-earlier levels. Especially robust was the expansion in its C&I lending, which grew at an 18% rate from the year earlier. The bank's management is confident in a continued economic expansion in the region. That is why the bank is opening branches –50 this year alone and another 35 next year– and is hiring in order to lure customers from other banks. According to Barron's, the bank is expected to continue seeing strong loan growth, amid a lending boom in C&I loans and stabilization in commercial real estate loans, to show prudent expense management, and to record higher fee-income growth, driven by branch openings and cross-selling initiatives. The bank is paying a dividend yield of 2.6% on a payout ratio of 26%. The stock is trading at a small premium to book value. Its ROE is 10.7%.

When it comes to income investing, hardly any banking stock can beat New York Community Bancorp (NYSE: NYCB). This bank pays a hefty 6.9% dividend yield on an exceptionally high payout ratio of 91%. There are some skeptics who believe that the bank will have a difficult time maintaining this dividend in the future. The bank has been paying a $1.00 per year in dividends since 2005. The bank's EPS is forecast to expand over the next five years, at an average annual rate of small-but-positive 3.4% per year. The bank has been able to maintain dividends in the previous years when its net income and free cash flow declined notably. This bank's stock, which has gained 14.3% over the past year, is trading at a small premium to book value. The bank has bolstered its book value through FDIC-sponsored acquisitions, which may play in the bank's favor once the economic expansion accelerates. The bank's ROE is 8.6%. It is worth mentioning that this stock has a seal of approval from the oldest living active investment professional and a value investor Irving Kahn of Kahn Brothers.