The asset management industry is often overlooked as a sector that pays attractive dividends. In fact, several asset managers have demonstrated ample free cash flow generation over a number of years, which provides for lush dividend yields, sustainable dividend coverage, and robust dividend growth. Despite some concerns about the poor market prospects and shrinking margins due to competitive pressures that could cut into revenues and earnings, several asset managers continue to show notable resilience and promise to continue generating strong cash flow in the future. The latter aspect is particularly important in the current low-yield environment in which “cash flow is king” and dividend-yielding investments are particularly appealing, according to a renowned economist and investment strategist David Rosenberg. 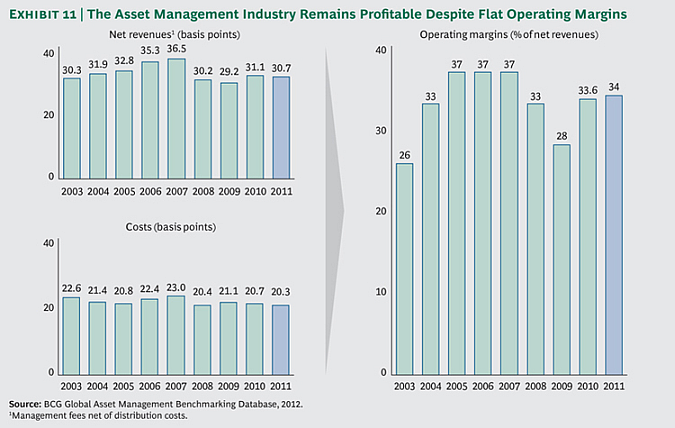 Several dividend-paying leaders in the investment management industry are awash in cash and thus represent excellent opportunities for income investors. What's more, analysts predict that special dividends are on the way from a few industry players.

Let's start with the asset managers that offer attractive dividend yields and the potential for healthy dividend growth for the future. For instance, BlackRock (NYSE: BLK), the world's largest asset manager with $3.67 trillion in assets under management (AUM), has been a notable dividend performer for a while. It currently yields 3.2% and its dividend payout ratio is 46% of trailing earnings and 44% of last year's free cash flow. The company's dividend has increased at a spectacular rate of 19.3% per year, on average, over the past five years. The company's dividend has increased six times and its free cash flow has risen 4.4 times since 2004. The company recently reported revenues and earnings per share that beat analyst estimates on top-line growth, lower expenses, and AUM expansion. Interestingly, in a vote of confidence in the company's outlook, one of its corporate insiders recently obtained a major position in BlackRock.

Another consistent dividend payer with proven earnings power and cash flow generation capacity is Invesco (NYSE: IVZ). This asset manager with $683 billion in AUM saw its free cash flow swell 6.5 times since 2004. Over the same period, the company's dividends increased 2.2 times. Dividends at Invesco grew at an average rate of nearly 10% per year over the past five years. Currently, Invesco pays a dividend yield of 2.9% on a payout ratio of 44% of trailing earnings and 38% of last year's free cash flow.

T. Rowe Price Group (Nasdaq: TROW) has also demonstrated consistent cash flows and dividend growth. With $574 billion in AUM, a new record, this asset manager pays a dividend yield of 2.1% on a payout ratio of 42.5% of trailing earnings and 42% of last year's free cash flow. Since 2004, the company's free cash flow jumped 2.7 times, while dividends increased 3.4 times. Over the past five years, dividends grew at an average rate of 14.4% per year. The company posted better-than-expected revenue and earnings per share in the third quarter, with the former growing at a robust 13.3% year-over-year rate. T. Rowe Price is debt-free with substantial liquidity, including cash and mutual fund investment holdings of about $2.3 billion. This will enable the company to continue investing in growth in the future.

Income investors should also consider SEI Investments (Nasdaq: SEIC), which reports $448 billion in mutual fund and pooled or separately managed assets. The company has been generating positive free cash flow for years, which has been used only partly to pay dividends. In fact, the current dividend, which yields 1.4%, accounts for only 27% of the asset manager's trailing earnings and free cash flow. The company's dividend has seen robust growth over the past five years, increasing at an average annual rate of 18.2%. SEI Investments reported third-quarter earnings in line with expectations, with the average AUM growing 9% year-over-year for the first nine months of the year.

In addition to these secure dividends, investors have an opportunity to cash in on prospective special dividend payments. Analysts at Jefferies believe that, in a demonstration of a strong cash flow position, a select group of asset managers has “the potential to declare and distribute special dividends prior to year end given strong balance sheets and the potential for changes in tax legislation.” This follows a move by Federated Investors (NYSE: FII), which on November 15 will pay a special dividend of $1.51 per share in addition to a regular quarterly dividend of 24 cents per share to shareholders of record on November 8. Two dividend-payers likely to pay special dividends are singled out: Franklin Resources (NYSE: BEN) and Waddell & Reed Financial (NYSE: WDR).

Franklin Resources: One Of The Riskiest Dividend Aristocrats

Seeking AlphaDividend Quick Picks5 Dividend Stocks With Recent Insider BuyingSep. 4, 2020 6:34 PM ET|| Includes: AGR, DOC, IVZ, RILY, RILYG, SWXby: Cashflow CapitalistCashflow Capitalist High Yield LandlordBecome a “Passive Landlord” with our 8% Yielding Real Estate Portfolio.SummaryI like seeing insiders buy stock in the companies that I own.All but one of the six stocks I highlighted in an April 3rd article about companies with insider buying have outperformed the market on a total return... Read more