Chevron, a Dividend Investment for the Future

The outlook for American integrated oil and natural gas giants, namely Exxon Mobil (NYSE: XOM), Chevron (NYSE: CVX) and ConocoPhillips (NYSE: COP), has just brightened. In its latest 2012 World Energy Outlook, the International Energy Agency predicts that the U.S., which for the first time since 1949 has become a net exporter of petroleum products, will be the leading oil producer by 2020. This is made possible by new conventional discoveries and technological advances that are boosting production from shale formations. The nation's largest companies are taking advantage of this boom and elevated oil prices, which are likely to be supported in the future by growth in emerging markets, especially in China and India. The leading market positions of the American energy titans so far has enabled them to generate substantial earnings and cash windfalls, which, in turn, has supported their generous dividend policies. A cash-rich Chevron, traditionally a dividend-growth play, has been and will continue to be a particularly attractive income and growth stock. 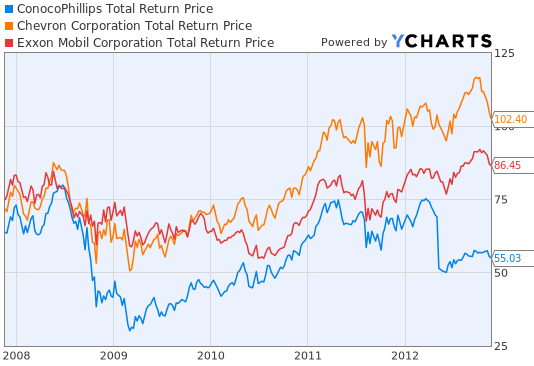 s regards the dividends specifically, Chevron, whose dividend currently yields 3.5%, grew its dividends at an average annual rate of 9.2% over the past five years. Over the same period, Exxon Mobil and ConocoPhillips expanded their dividends at higher average annual rates of 9.7% and 10.0%, respectively. Despite the marginally higher dividend growth rate than Chevron's, Exxon Mobil is yielding 90 basis points less, or 2.6%. On the other hand, ConocoPhillips has the highest dividend yield of the three, at 4.8%. However, ConocoPhillips' payout ratio as percentage of free cash flow is the highest among the three.

Chevron has an optimal cash flow position that assures future dividend increases, notwithstanding the expectation that the company will seek to expand its assets in the United States and globally. The company has very little long-term debt, about 9% of its equity, and plenty of cash at hand. Its cash stock totals $21.6 billion and its long-term debt totals $12.3 billion. On the other hand, Exxon Mobil, the world's biggest dividend payer, has almost as much long-term debt as Chevron but only half the competitor's amount of cash at hand. ConocoPhillips has about $3.7 billion in cash and $21 billion in long-term debt. Indeed, Exxon Mobil has depleted its cash reserves due to asset accumulations to expand production capacity. Chevron, whose annual oil production this year will be 3% off relative to the target, is likely to spend some of its cash on productive asset purchases. However, it also plans to retain high liquidity, so as to maintain a cushion against volatile crude prices and possible cost overruns on its major projects, particularly the natural-gas project in West Australia.

While Exxon Mobil produces two thirds more oil and natural gas than Chevron, the latter's profitability per barrel currently exceeds that of Exxon Mobil. Moreover, Chevron's total production is more leveraged than Exxon Mobil's to oil, which is currently more profitable than natural gas. This was particularly obvious in the last quarter, in which Chevron's revenues plunged 10% and EPS dived 46% from the year-earlier quarter due to lower oil prices. However, the oil supply has not expanded as dramatically as has the supply of natural gas, which adversely affected natural gas prices. A measured additional oil production and supportive demand from emerging markets bode well for elevated oil prices in the future, which should support Chevron's financial performance in the years ahead. Demand for natural gas and natural gas liquids, considered by some the fuel of the future, will also rise significantly, benefiting Chevron's natural gas plays in Australia and Indonesia.

Chevron is expanding its domestic and international output capacity. The company recently acquired Chesapeake Energy (NYSE: CHK) acreage in the lucrative Permian Basin. As already noted, the company is expanding its oil and natural gas assets in Australia and Indonesia, which will have a particularly favorable exposure to the growing emerging markets in Asia. In Europe, the company is increasing acreage in Lithuania, Poland and Bulgaria. Unfortunately, it should be noted, an Argentine court has just seized Chevron's assets in the nation in a push to collect $19 billion that Ecuadorean plaintiffs against the company, based on pollution charges, had won in a local court.

Despite the current adversity, it is relevant to note that the growing opportunities for Chevron and Exxon Mobil have been recognized by several reputed hedge fund managers. Stanley Druckenmiller, who used to run Duquesne Capital, one of the most successful hedge funds in the industry's history, returning more than 30% per year over its three decades of operations, and is currently running a family fund, initiated new positions in Chevron and Exxon Mobil in the third quarter. He invested as much as $210 million in the two stocks. Billionaire Ken Fisher also bolstered his stake in Chevron in the previous quarter, investing as much as $416 million in the stock. Jeremy Grantham, a famed value investor, is also an avid Chevron bull, holding a stake in the company valued at nearly $1.1 billion.

CEQP Stock Up 240% Year-Over-Year; Company Increases 2021 Guidance What’s not to like about Crestwood Equity Partners LP (NYSE: CEQP)? The company has done everything you’d expect a high-yield stock to do during the worst economic crisis in 100 years. Crestwood Equity Partners stock has provided substantial, reliable passive income during times of volatility and underlying strength when the markets have turned bullish. Before the COVID-19-related stock market crash in February/March... Read more

This article is a mid-year update of the Cash Flow Kingdom Income Portfolio previously covered at the beginning of the year in, "11.1% Yielding Portfolio With Good Coverage And Decent Growth Prospects". Cash Flow Kingdom members get more frequent updates of this information-- Macroeconomics, Market Indicators, Income Portfolio performance, and current Best Opportunities --in a regularly published "Synopsis" article. Macroeconomics: The US economy continues to do well with US - China... Read more

On ugly days like Monday, when the Dow finished down $617.38 and the Nasdaq finished down $269.92, it makes me even more thankful for dividends. I have been constructing a dividend portfolio outside of my wife and my 401Ks and trading accounts. I add to the dividend portfolio by selling positions in our trading accounts and reallocating the profit and putting new capital to work. My goal is to supplement as much of our income as possible in retirement, with income from dividends prior to social... Read more

Stocks discussed on the Lightning Round segment of Jim Cramer's Mad Money Program, Friday, March 2. Bullish Calls Raymond James Financial (NYSE: RJF): The company is doing very well. Vail Resorts (NYSE: MTN): It's a good long-term stock. It is out of favor right now, and that means this might be the best time to take a position in it. Bearish Calls Snap, Inc. (NYSE: SNAP): "The growth was really fabulous but the redesign is freaking everybody out, so we're going to have to default... Read more