Mattel or Hasbro: Which is a Better Dividend Play?

The holiday shopping season is starting officially this week. Hence, while it may be a good time to look for bargains, is it really a good time for investors to shop for stocks of dividend-paying toy retailers? Mattel (Nasdaq: MAT) and Hasbro (Nasdaq: HAS), the world's largest toy makers, are currently paying relatively high dividend yields of 3.4% for the former and 3.8% for the latter. Both have beat earnings expectations in the past two quarters, and their forward valuations are attractive relative to historical trends. However, general trends in toy retailing in the developed markets cloud the sales outlook, despite the overly bullish expectations about future industry growth. With this in mind, a closer look at the two toy retailers suggests that, going forward, Mattel may be a better dividend investment, despite its lower dividend yield.

According to Goldman Sachs, the toy industry in the developed markets is in dire states. In the United States alone, the nominal amount spent on traditional toys and games per capita declined from $85 in 1998 to $60 in 2011. That represents a nearly 30% decline since 1998; however, the pace of declines is accelerating this year. According to data from a research firm Euromonitor, between 2008 and 2011, the U.S. toy industry growth was flat. In Europe, the situation is not much different, with per capita spending declining and industry growth slowing to about 3% per year over the past three years. The economic slowdown in the United States and a recession in Europe, characterized by high unemployment and tight fiscal spending, are likely to dampen the consumer propensity to spend on discretionary items such as toys. Given that both Mattel and Hasbro derive as much as 60% of their sales from the U.S. market and another 30% from Europe –making its total of up to 90% from the mature developed markets– the outlook looks rather cloudy.

Nevertheless, the industry expects to expand its reach in the emerging markets, buoyed by the ascendance of the middle class in industrializing nations, in particularly in Brazil, Russia, India, and China, the so-called BRIC nations. In fact, by 2020, some 86% of the world's middle-class households will be located in emerging nations in which current spending per capita on toys is a mere fraction of the nominal amount in the mature markets. Hence, rising incomes in emerging markets are expected to boost the demand for toys, both in nominal, per child level and in absolute terms. Based on this, Mattel recently presented a bullish outlook for the industry in the 2012-2016 period, in which, based on the industry data from Euromonitor, it expects to see global industry growth more than doubling to 7% per year from the average rate of growth of 3% achieved over the past three years. Especially robust should be sales in Latin America and Asia (China and India), which are forecast to grow at an average rate of about 10% per year in the noted period. 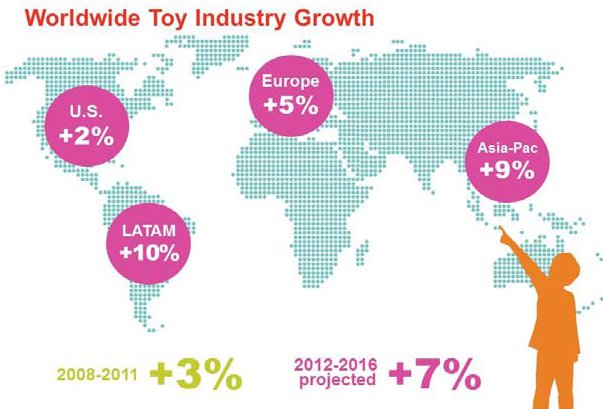 Mattel is likely to continue to outperform Hasbro in terms of total returns. Hasbro has a higher share in revenues from games and puzzles than Mattel–consisting of up to 30% of total sales at Hasbro. Sales of these types of products are declining at a faster rate than sales of other types of games and toys in the industry. Goldman Sachs' analysts think that Hasbro's “Transformers” toys are “outselling” now, likely pulling ahead the demand from the future. Taking into consideration all sales of games and toys in all geographical regions, Hasbro stands to achieve a lower EPS growth for the next five years. Analysts forecast that its EPS growth will average 7.4% per year, compared to slightly more than 9% annually for Mattel. This bodes well for a continued strong performance of Mattel's stock price. On the other hand, as Hasbro's payout ratio has reached 55% of trailing earnings and 68% of free cash flow, the company is likely to moderate its dividend hikes in the future, likely implementing dividend boosts in single digits. This applies to Mattel as well, whose payout ratio has reached 51% of trailing earnings and 93% of free cash flow.

In terms of valuation, Mattel is carrying a premium due to high EPS growth expectations. Mattel is currently trading at a trailing P/E of 14.8 and a forward P/E of 13.6. These compare to the ratios of 14.3 and 13.3, respectively, for Hasbro. Trailing P/Es of both toy retailers are higher than their 5-year P/E averages, but forward P/E are more attractively positioned below historical averages. On the other hand, it should be noted that Hasbro's stock still has a higher free cash flow than Mattel's. Hasbro's free cash flow yield is 5.3%, while Mattel's is low at 2.3%.

With all this in mind, investors interested in establishing long-term positions in the retail industry should consider investing in the yield-rich toy retailers. Mattel could be an appealing investment that stands to benefit from emerging market growth and investment money's chasing of meaningful yield in a yield-scarce environment.

Hasbro, Inc. (NASDAQ: HAS) today announced that its Board of Directors has declared a quarterly cash dividend of $0.70 per common share. The dividend will be payable on February 15, 2023 to shareholders of record at the close of business on February 1, 2023.... Read more

You Shall Never Wait To Invest - October Dividend Income Report

Seeking AlphaDividend StrategyYou Shall Never Wait To Invest - October Dividend Income ReportNov. 18, 2020 8:58 AM ET|| Includes: AAPL, BLK, DIS, GNTX, HAS, LAZ, MSFT, SBUX, TXN, UPS, V, VFCby: The Dividend GuyThe Dividend Guy Dividend Growth RocksA service focused on stocks doubling their payouts within 10 years.SummarySince I started this portfolio in September 2017, I have received a total of $10,079.39 CAD in dividends.Keep in mind that this is a "pure dividend growth... Read more