The connection between gender and corporate profitability does not appear to be so obvious, but empirical research shows that higher participation of women in corporate management is good for the company's bottom line. While the share of women chief executives at the helm of the world's 1000 largest companies remains low at 4% and the percentage of women as executive officers hovers around 14.6%, companies managed by women tend to outperform their peers based on several profitability metrics. Moreover, among the most prominent corporations run by women, several pay attractive dividend yields.

Evidence from empirical studies of the positive effect from women's participation in executive decision-making on corporate bottom lines is plentiful. According to a multi-annual study by Pepperdine University of the performance of about 200 of the Fortune 500 companies (the ones providing gender breakdown of their executives), it was concluded that the “correlation between high-level female executives and business success has been consistent and revealing.”

Now, while the share of women in top executive posts has increased over the past several decades, it remains low by all means. The number of female corporate officers in Fortune 500 companies increased from 11.2% in 1998 to a peak of 16.4% in 2005. It has since dropped to about 15.7%. According to Catalyst, at the observed rate of growth, “it would take 40 years for the number of female corporate officers to match the number of male officers.” On the other hand, the share of women-held board seats has risen progressively from 9.6% in 1995 to 16.1% in 2011. However, in terms of Chief Executive Officers (CEOs), the share of women in top post remains low at 3.8% of the Fortune 500 companies, or 19 in total. 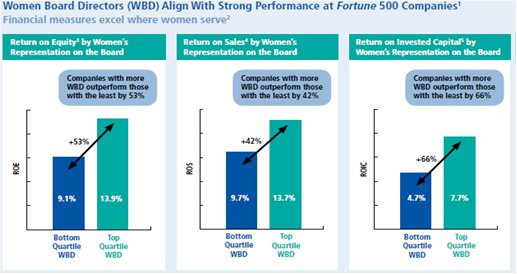 Several other corporate giants led by women are good examples of business excellence. IBM (NYSE: IBM), as the second-largest company managed by a woman, is a model of outperformance. Over the past five years, the company grew its EPS and dividends at average annual rates of 16.6% and 17.1% per year, respectively. The company currently has a dividend yield of 1.8% on a low dividend payout ratio of only 24%. Its return on equity (ROE) is exceptionally high at 74%. In terms of total returns, investment in this stock five years ago would have returned, to date, 14.6% annually. This is better than for any other stock in the Dow Jones Industrial Average. The cash-rich IBM is likely to continue to boost its dividends in the future. It is one of the preferred stocks of legendary investor Warren Buffett.

PepsiCo (NYSE: PEP), a Dividend Aristocrat boosting dividends for 39 years in a row, is another female-led corporate giant with outstanding performance. With a dividend yield of 3.1%, this company pays out 57% of its earnings in dividends. It has been growing dividends at a rate of 9.3% per year over the past five years. PepsiCo's total ROE is high at 26.2%.

Among the Fortune 500 firms is also a high yielder Frontier Communications (NYSE: FTR). The company has an elevated dividend yield due to poor stock performance amid lackluster financial results in recent periods and a weak balance sheet. In fact, the company slashed its dividend by 47% in the first quarter of 2012. Still, it pays a yield of 8.3% on a payout ratio of 51% of free cash flow. The current payout ratio is sustainable, and has declined to 46% of free cash flow in the previous quarter from 70% in the year-ago quarter. The stock is a viable income play.

Furthermore, as of January 1, 2013, the aerospace and defense sector will be richer by two new women executives taking over the helms of two other Fortune 500 companies: General Dynamics (NYSE: GD) and Lockheed Martin (NYSE: LMT). Both these companies have had remarkable earnings and dividend growth in the past. Despite the fiscal tightening, their earnings outlooks remain solid. General Dynamics, whose dividend increased 12.7% per year over the past five years, currently yields 3.1%. Its competitor Lockheed Martin yields a lush 4.9% dividend, with a 5-year dividend growth averaging 23% per year over the past five years. The new CEO of Lockheed Martin, Marillyn Hewson, faces a challenge of sustaining a skyhigh ROE at 107%.

Based on the documented studies, an increase in the number of female executives in the corporate bodies should lead to the affected companies' better financial performance in the future. Investors who want to reap benefits from the winning leadership of the few women running the world's largest corporation should invest in the dividend-yielders with a proven record of business success.

It's earnings season and across the board the results have mostly been better than expected, sending markets to all-time highs especially driven by the large gains in Microsoft (MSFT), Apple (AAPL) and UnitedHealth Group (UNH). Source: financeandmarkets.com It has gotten pretty quiet on the trade frontier. Trump generated no visible noise and instead celebrated the most recent rally of the markets, while the unusual comment by the Chinese that they are uncertain how binding such... Read more

Uniti Dividend Is Likely To Be Suspended

Introduction Uniti's (NYSE: UNIT) share price has fallen by over 50% in the last ten days following an adverse legal ruling that might trigger or accelerate a default of its largest customer, Windstream (NYSE: WIN). There are speculations about the fairness of the judicial decision, the safety of master lease agreement between Uniti and Windstream and the risk or the quantum of a dividend cut at UNIT. In addition to the legal uncertainty, a key issue is the falling revenue base of the... Read more

Floating rate loans are similar to high yield ("junk") bonds but have a coupon payment that adjusts with interest rates on a quarterly (typically) basis. We are clearly in, and have been for over two years, a rising interest rate environment. Shortly after the Brexit vote, global interest rates hit their low point with the U.S. ten-year treasury rate falling to an all-time* low of 1.37%. At about that time, our marketplace service Yield Hunting, instituted a "three-legged stool" strategy... Read more