Over the past ten years, the Canadian stock market has outperformed the U.S. stock market by 100%, according to David Rosenberg, chief economist at Glushkin Sheff & Associates Inc. While the Canadian market's returns lagged the broad U.S. equity indices last year, they are expected to outperform this year. Some analysts forecast that the S&P/TSX will grow slightly more than 7% in 2013, whereas the S&P 500 index will gain 4.6%, based on the average 2013 year-end target of nine equity strategists including, inter alia, analysts at Morgan Stanley, Goldman Sachs, Bank of America Merrill Lynch, and UBS. The Canadian market could see more upside potential this year and in the longer-term, if the commodities demand and prices rebound, boosting the performance of Canadian resource companies. With this in mind, investors should consider opportunities for income investing in Canada.

The fundamentally strong Canadian economy is likely to provide support to stronger Canadian equity performance over the long haul. The Canadian economy appears to be on a firmer macroeconomic footing for a sustained economic prosperity than the U.S. economy. According to David Rosenberg, “Canada has an unemployment rate that is two percentage points lower, and an industry operating rate (CAPU) that is two percentage points higher than is the case in the U.S., and yet inflation, both total and core, is about a full percentage point lower.” The Canadian economy has benefited from an appreciating currency that is providing the impetus for building the productive private capital stock, which, in the long-term, will drive the economy's competitiveness and productivity. In contrast, the U.S. economy is driven by consumption and housing. In addition, the resource-rich Canadian economy is well positioned to benefit from the long-term global population growth and the booming resource use driven by emerging market growth. All this bodes well for Canada's corporate profitability and performance.

There are many ways to invest for income in Canada so as to attempt to capitalize on the nation's prospects. Some income investors prefer holding equities of companies that have proven earnings power and consistent dividend growth. These investors should evaluate the S&P/TSX Canadian Dividend Aristocrats index constituents or exchange-traded products designed to track this index, such as Canada-listed iShares S&P/TSX Canadian Dividend Aristocrats Index Fund (TSX: CDZ). The index and fund constituents are stocks of well-established Canadian companies that have increased their dividends for at least five consecutive years. 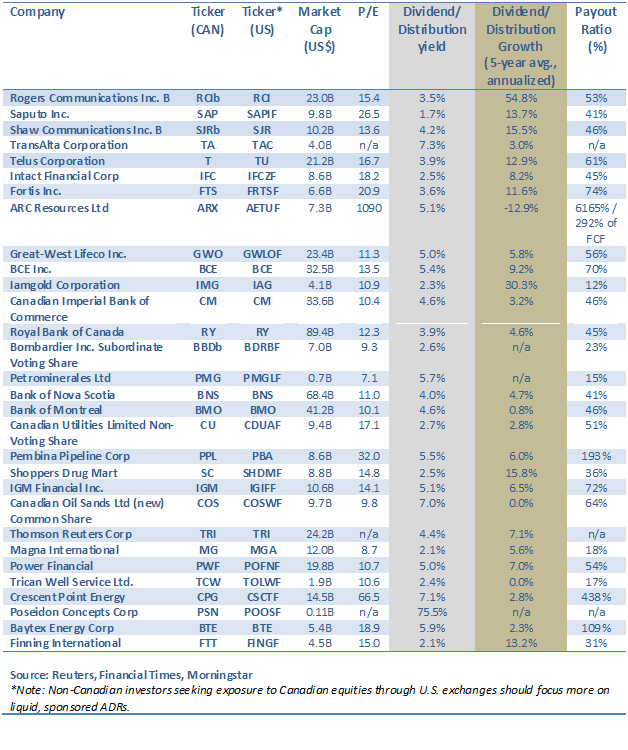 There are other investment instruments providing exposure to the Canadian dividend stocks. A relatively new ETF that gives exposure to Canada's top dividend stocks is the First Asset Morningstar Canada Dividend Target 30 Index ETF (TSX: DXM). This fund invests in 30 largest and most liquid Canadian public issuers selected according to a proprietary methodology of Morningstar, a fund research company. Morningstar's fundamentally-based selection criteria focus on a combination of attributes such as expected dividend yield, cash flow to debt, 5-year normal EPS growth, return on equity, and 3-month EPS estimate revision. The fund provides a pool of 30 dividend stocks from across industries and sectors.

The holdings of both funds can be good starting points for identifying Canada's best dividend stocks. The table below provides a glance at the main dividend characteristics of the constituents of the Morningstar Canada Dividend Target 30 Index and the noted Fund. Some of the featured companies are known as dividend growers, such as Rogers Communications (TSX: RCIb)(NYSE: RCI) and Shaw Communications (TSX: SJRb)(NYSE: SJR). Several other companies, such as Iamgold (TSX: IMG)(NYSE: IAG) and Shoppers Drug Mart (TSX: SC)(OTC: SHDMF.PK) have the capacity to boost their dividends considerably. The few banks comprising the index and the fund, such as Canadian Imperial Bank of Commerce (TSX: CM)(NYSE: CM), Royal Bank of Canada (TSX: RY)(NYSE: RY), Bank of Nova Scotia (TSX: BNS)(NYSE: BNS), and Bank of Montreal (TSX: BMO)(NYSE: BMO), are well known for their solid balance sheets and comparatively high dividend yields. It should be noted that one company, Poseidon Concepts (TSX: PSN)(OTC: POOSF) has suspended its dividend and will likely be removed from the index.