A number of refiners and integrated oil companies recently reported strong financial performance in the previous quarter, with significant expansions in refining margins. The boom in unconventional oil shale output in North America has provided opportunities for some U.S.-based refiners to substitute their higher-priced imported oil for lower-cost domestic oil, which is resulting in a substantial refined-products margin expansion. This trend is likely to be sustained in the longer run, which will have a positive effect on the cost structure of U.S.-based oil refiners. Plus, improving profitability could mean continued dividend growth in the sector, even though most dividend-paying refiners have been boosting their payouts robustly over the past year.

Last week, the two largest U.S. integrated oil companies by market capitalization, Exxon Mobil (NYSE: XOM) and Chevron (NYSE: CVX), saw big boosts to their profits from U.S. refining operations. In the fourth quarter of 2012, Exxon Mobil's refineries cashed in $1.77 billion in profit, a four-fold increase from the year-earlier level. The surge in refining profits came despite the lower crude processing volumes in the quarter compared to the year earlier. At Exxon, the strong refining profits helped offset a 12% decline in earnings from oil and gas production. On the other hand, Chevron saw its refining profits from global operations swing from a loss of $61 million, recorded in the fourth quarter of 2011, to a profit of $925 million in the same quarter of 2012. Driven by stronger margins, Chevron”s U.S. downstream operations earned $331 million in the quarter, a reversal of the loss of $204 million in the year-earlier period. Still, the processing rates at Chevron”s U.S. refineries were 8% lower year-over-year, due to plant closures amid fire incidents. 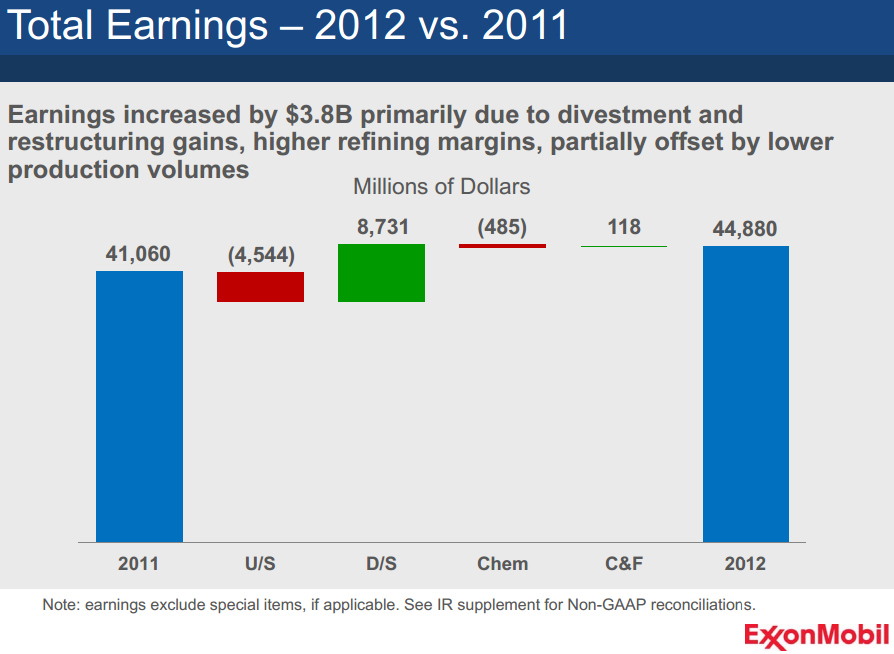 The same theme of surging profitability of refining operations was also reverberated by several pure-play U.S. refiners. Valero Energy (NYSE: VLO), reported a nearly 23-fold increase in fourth-quarter earnings, from $0.08 per share in 2011 to $1.82 per share in 2012. The earnings surge was a result of the substitution of more expensive imported oil for the cheaper U.S. crude supplies from shale formations. In a conference call, the company”s management suggested that this trend of cost reductions and a consequent margin expansion could continue: “Since we expect U.S. and Canadian crude oils to become increasingly more available, we are pursuing options to process additional volumes of these cost-advantaged crudes throughout our refining system.”

Furthermore, Phillips 66 (NYSE: PSX), a recent spin-off from Conoco Phillips (NYSE: COP), also saw a surge in refining margins last quarter, which boosted both refining revenues and earnings. The company is well positioned to take advantage of the lower-cost shale oil. As a result, it processed 135,000 barrels per day of shale crude in the fourth quarter of 2012, some 97% more than in the same period the year before. The company expects to boost its daily processing rates by 79% from the 2012 average to more than 200,000 barrels a day of domestic shale crude. Phillips 66”s refining operations registered adjusted earnings of $916 million, well above the year-earlier levels and despite the lower refining utilization rates. The company is committed to increasing the U.S. refining export capacity.

According to Bloomberg, U.S. refinery margins rose 46% during the fourth quarter of 2012, driven by lower crude oil prices amid larger supplies from North American shale formations. According to Credit Suisse, refiners are trading on low mid-cycle EV/EBITDA multiples. They are likely to generate robust free cash flow, which will provide for higher share buybacks and dividends. The trend of strong dividend growth is presented in the table below. In addition to robust dividend growth, some market players have increased share repurchase authorizations. Two examples are Phillips 66, which in late 2012 boosted its stock buybacks by $1 billion, and Marathon Petroleum Corporation, which recently hiked its share repurchase authorization by $2 billion to $2.65 billion valid through December 2014. 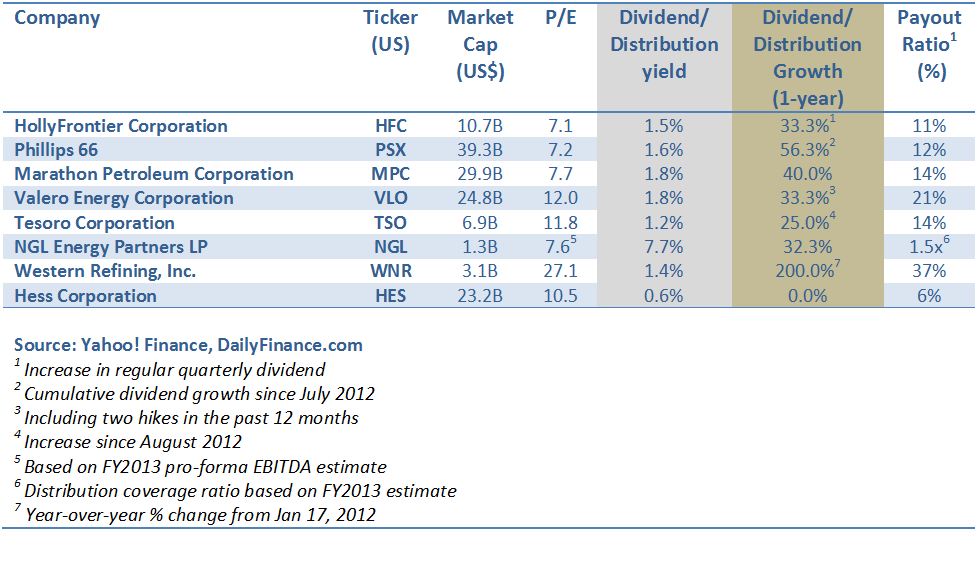 However, there are reasons to question the sustainability of the current margin expansion. Refining margins are highly volatile. Thus, given the uncertainty about future profitability, refiners generally carry lower multiples. The resilience of gasoline and middle distillate cracks is contradicting the expected trends amid weakness in the oil demand and the global economy. Some analysts expect the refining capacity pressures from plant shutdowns to stabilize this year and the newly-added capacity to impose pressures on margins going forward. It remains to be seen whether the cross-industry trend of falling input costs, driven by a greater reliance on the cheaper U.S. crude supplies, outweighs the higher expected capacity.

Still, refining stocks paying dividends have been boosting their payouts substantially, and some qualify for good dividend growth investments, given their low payout ratios and the prospect of continued free cash flow expansion driven by stronger margins. For example, despite the uncertainty about margins, some refiners are planning higher payouts this year. One example is NGL Energy Partners LP (NYSE: NGL), a Master Limited Partnership, which is targeting a 12%-to-15% increase in distributions in 2013. Most other refiners have plenty of room to boost dividend payouts this year and beyond.
Investors should assess their opportunities and risks in the refining business. While the sector as a whole is seeing strong earnings and price momentum, dividend investors should consider the sector’s prospects for long-term dividend growth.

AMZA: The Surprising Verdict On The 20% Plus Yield

Enlink Preferred: A Solid 15.3% Yielder That Most Income Investors Have Never Even Heard Of