With the US Energy Information Administration predicting a long-term uptrend for oil prices over the next few decades in its Annual Energy Outlook 2013, investors around the world have started looking closely at stocks of companies in the energy sector. As per AEO 2013 released recently, in 2040, Brent Crude is likely to hover around $163 per barrel which is equivalent to $269 per barrel in nominal terms. For AEO2013, the oil price is represented by spot prices for light, sweet Intercontinental Exchange Brent crude oil instead of WTI crude oil traded on NYMEX. This change was made to better reflect the price refineries pay for imported light, sweet crude oil and takes into account the divergence of WTI prices from those of globally traded benchmark crudes such as Brent. WTI prices have diverged from other benchmark crude prices because of insufficient pipeline capacity to move crude oil to and from Cushing, Oklahoma (the location at which WTI prices are quoted), and the growth of midcontinent and Canadian oil production that has overwhelmed the transportation infrastructure needed to move crude from Cushing to the U.S. Gulf of Mexico.
Whether it is the upstream explorers, the downstream refiners or the oil infrastructure companies, all are likely to benefit from this firm price trend. 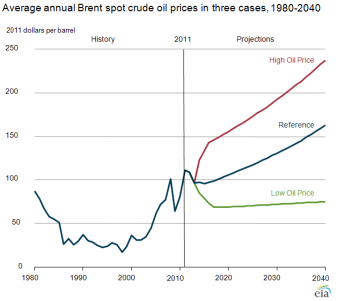 Consequently, several oil companies are looking attractive from the point of valuations. In addition to the possible capital appreciation over the next few years, if one can get hold of a steady stream of dividend income, it will an excellent icing on the cake. Regular dividends reduce the cost of acquisition of the share and also limit the downside risk based on the theoretical pricing models. Here, one can think of some Canadian oil companies which have an excellent track record of paying dividends. Two of them are discussed below.

Canadian Oil Sands (TSE: COS) holds 36.74% stake in Syncrude Project which produces crude oil from the mining and processing of oil sands. Established in 1978, Syncrude produces high quality light crude oil. Based on its holding in Syncrude, COS has been paying dividends to its shareholders for the last many years. The annual dividend of $1.35 in 2012 translated into a yield of around 6.58%. The revenue has increased from $2.78B in 2009 to 3.70B in 2012. The net income has increased from $432M to $981M during the same period. The dividend in 2009 was $0.90, indicating a rise of 50% over the three years. COS has lower P/E ratio and the NPM is higher. The P/B is an acceptable 2.28 and the current ratio is a decent 1.80. D/E ratio is, however, significantly higher than CPG.

As evident from above, these companies have a long professional history, healthy profit margins, reasonable revenues / market capitalization and, most importantly, an enviable record of continuous dividend payments. The stock prices of these companies have been steady for the last 3-4 years. Now that the oil companies are beginning to find favor with investors, it is hoped that the dividend stream will be coupled with reasonable appreciation in the stock prices.
Considering the fundamentals and the dividend payment history it appears that Canadian Oil Sands Company can be the preferred stock. This is because it has lower P/E, excellent NPM and high dividend growth.