Income investors in pursuit of both high yields and monthly income have at their disposal securities of U.S. energy-based royalty trusts and Canadian energy-sector corporations that used to operate as income trusts prior to a tax-regime change that eliminated Canada’s royalty trust structure as of January 1, 2011. These securities offer high dividend yields; however, given that some of them pay variable-rate distribution/dividend payouts, they cannot ensure stable income flows over long-term periods. Moreover, high yields of some monthly dividend-payers reflect heightened risks of dividend sustainability, which warrants a careful evaluation of these companies’ fundamentals before investors include them in their income-producing portfolios.
As regards U.S. royalty trusts, these investment vehicles are similar to real estate investment trusts (REITs) because they avoid double-taxation by distributing at least 90% of their income as cash distributions/dividends. Their distributions are either reinvested to avoid capital gains taxes or are taxed at a personal income level as regular dividends. However, distributions paid by royalty trust are not fully taxable, as part of the distribution is considered a capital return because of well depletion. This allows for a depletion deduction to be taken on taxes. On the other hand, while Canadian royalty trusts converted to corporations a couple of years back, several Canada’s transformed energy-sector corporations still offer attractive yields on a monthly basis.
Below is a list of seven high-yielding securities from North America offering monthly distributions/dividends. Most of these distributions/dividends have been cut over the past year, as they fluctuate with the changes in underlying commodity prices, given that energy prices directly affect the trusts’ and corporations’ profitability. 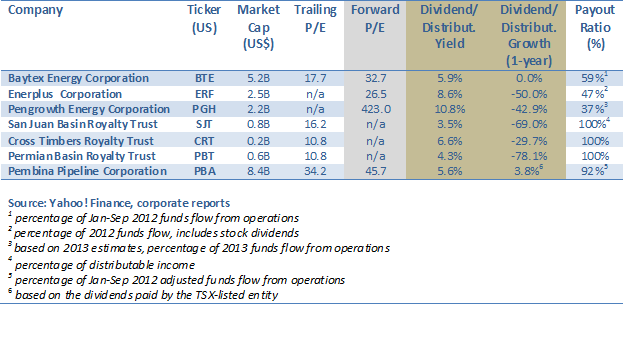 Baytex Energy (TSX: BTE)(NYSE: BTE) acquires, develops and produces oil and natural gas in the Western Canadian Sedimentary Basin. The company has proven and probable reserve resources of 234 mmboe and contingent resources of 738 mmboe, with reserve mix of 92% oil. In the third quarter of 2012, the company was producing at a rate of 54,348 boe per day. The production rate is expected to rise to between 56,000 and 58,000 boe per day in 2013. The company has a long-term crude oil production CAGR of 8%. Baytex Energy has a debt-to-EBITDA of 0.8x. The company expects to boost its after-tax funds from operations by 60% over the next five years, driven by organic production growth and improved heavy oil prices. Out of the aforementioned securities, with the exception of Pembina Pipeline Corporation, Baytex Energy appears to offer a sustainable dividend with dividend growth prospects. Its dividend has grown 4.1% annually over the past five years. Still, BTE shares are down 27% over the past year.

Enerplus (TSX: ERF)(NYSE: ERF) was a Canadian royalty trusts that converted into a traditional energy exploration and production company. The company holds large stakes in the Bakken and Marcellus Shale assets in the United States. In the fourth quarter of 2012, the company increased its daily oil and gas output by 11% year-over-year to 85,490 boe per day. This year, the company expects the production rate to average between 82,000 boe per day and 85,000 boe per day, with a 50% weighting to crude oil and liquids. This is an expected increase of 2% versus 2012, using the mid-point of this range. As a result of higher output and commodity pricing, funds flow should improve by 8% over 2012 levels. With this increase and a 20% decline in capex, the company’s dividend payout ratio should improve. Still, reflecting a dividend cut of 50% within a year, the stock is down 47% over the past year.

Pengrowth Energy (TSX: PGF)(NYSE: PGH), an intermediate Canadian producer of oil and natural gas, has also seen sharply lower stock prices, down 58% over the past year. Paying dividends for 25 years, the company has seen its profit decline amid production cuts and higher power and maintenance costs. The company’s 2013 midpoint output rate is 86,000 boe per day. The company is divesting non-core assets in order to cover its dividends and capex, which raises questions about the long-term sustainability of its dividend. We recently wrote about Pengrowth Energy as one of the six Canadian dividend-paying stocks that have seen higher institutional purchases in recent months.

San Juan Basin Royalty Trust (NYSE: SJT) has a 75% net overriding royalty interest in oil and gas leasehold and royalty interests by Burlington Resources Oil & Gas Company LP located in the San Juan Basin in northwestern New Mexico. For the nine months ended September 30, 2012, the trust received royalty income of $30,359,217 and interest income of $569,686. In total, this income represented a decline of 37.6% from the year-earlier levels. Distributable income per share for the first nine months in 2012 was 38.6% lower than in the same period the year before. The drop was mainly attributed to lower natural gas prices. In fact, San Juan Basin Royalty Trust may be a good play on natural gas prices, as the trust receives 75% of its profits from long-life gas wells. Based on the EIA outlook for natural gas prices, spot prices may be expected to rise nearly 40% by 2014 from the average level in 2012. The trust has just declared a monthly cash distribution of $0.026651 per unit, payable in March 2013, based on production during the month of December 2012.

Cross Timber Royalty Trust (NYSE: CRT) has 90% net profits interests in royalty and overriding royalty interest properties producing oil and gas in Texas, Oklahoma, and New Mexico as well as 75% net profits working interests in seven oil-producing properties in Texas and Oklahoma. The trust saw an 18% decline in net profits for the first nine months of 2012, mainly due to lower gas prices, decreased oil and gas output, and increased development costs. Its distributable income per share also fell nearly 18% over the same period. The trust’s prospects are tied to the direction of oil and natural gas prices, and, to a lesser extent, to production that has been falling at a 10% annual rate over the past three years. The royalty trust has just declared a distribution for February 2013 of $0.154675 per unit, payable in March 2013. The distribution is 29.7% lower than a year ago.

Permian Basin Royalty Trust (NYSE: PBT) holds a 75% net overriding royalty interest carved out by Southland Royalty Company from its fee mineral interest in Texas and a 95% net overriding royalty interest carved out by Southland from its major producing royalty properties in Texas. The royalty trust saw its total income for the first nine months of 2012 at $45,685,587, down 8.8% over the same period a year earlier. Distributable income per share for the same period fell 8.6%.The main culprit behind the drop in profit was lower gas prices. The units of Permian Basin Royalty Trust are trading down nearly 36% over the past year. The royalty trust recently declared a February 2013 cash distribution of $.035963 per unit, payable in March 2013.

Pembina Pipeline (TSX: PPL)(NYSE: PBA) is Canada’s third-largest energy infrastructure company. It owns and operates an extensive network of some 7,850 km of pipelines that transport conventional and synthetic crude oil and natural gas liquids; 1,650 km of oil sands and heavy oil pipelines, gas gathering and processing facilities; and an oil and natural gas liquids infrastructure and logistics business. Pembina also operates midstream and marketing services that span across its operations. Following its acquisition of Provident Energy Ltd. for $3.1 billion in stock, Pembina Pipeline Corporation’s stock began trading on the NYSE. The company has seen robust revenue, profits, and cash flow growth. Over the first nine months of 2012, its revenue increased 79% year-over-year, boosted by the noted acquisition, mainly from midstream operations and growth in all other operational segments. Adjusted EBITDA was up 39.4% over the same period. However, adjusted cash flow from operating activities per share was down 9.1% year-over-year, as the increase in the number of shares outstanding offset the robust expansion in cash flow. Given the strong demand in the sector, cash flow can be expected to increase in the future.